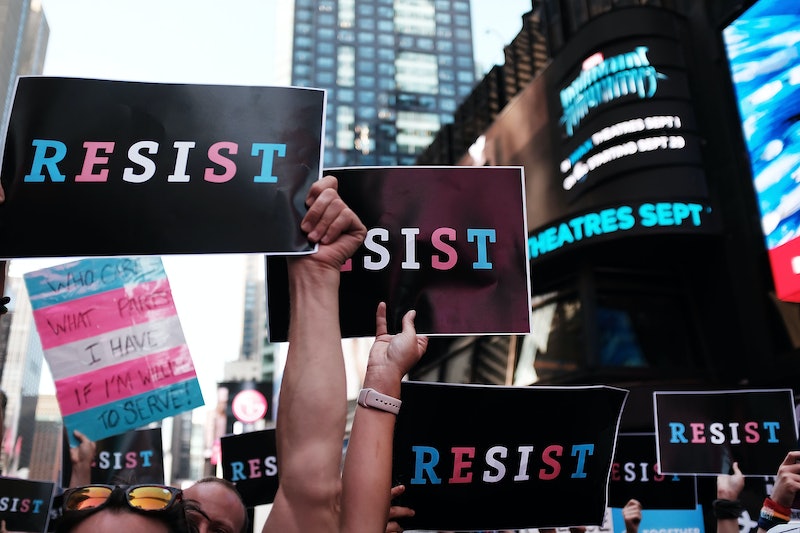 Last week, the Trump administration effectively implemented a ban on transgender people serving in the military, nearly two years after President Donald Trump first called for such a measure. However, this new policy doesn't just affect people currently in the military. The transgender military ban is also impacting students who have military scholarships or plan to join the military after graduation.

According to Newsweek, a transgender student reportedly lost his scholarship at the University of Texas because he was working toward a commission in the Army Reserve Officer Training Corps (AROTC) and is no longer eligible for military service. On a GoFundMe page he created after the ban went into effect, the student — Map Pesqueira — explained that he had "received a national scholarship from the Army that would help fund most of [his] education" during his last year of high school.

Because of the transgender military ban, however, Pesqueira is now unable to use that scholarship, and he is "struggling to find a way to financially afford coming back to UT Austin for my sophomore year." Pesquiera was hoping for a commission as a Second Lieutenant after graduation, he wrote on his GoFundMe page, but he was also studying Radio/TV/Film and American Studies, and he was counting on having a scholarship to pursue these degrees. The ROTC scholarship would have covered the last three years of his education, according to Yahoo News, meaning he would have only had to pay tuition out of pocket for his freshman year.

"It was just a happy medium that I was able to go to school and also pursue a military career," Pesqueira told KVUE. "I knew that I wouldn't have to bury my identity to serve my country."

On his GoFundMe page, Pesqueira explained that he no longer qualifies for military service because he began medically transitioning in 2018. He launched the GoFundMe page to help him pay for tuition at least through his second year at UT Austin, he wrote, because "filmmaking has always been a deep passion I've held close to my heart and intend to continue to pursue it even if I am still not able to join the military after college."

Pesqueira is not the only student who has been placed in an impossibly difficult situation as a result of the transgender military ban. According to CBS News, the United States Naval Academy will no longer admit transgender students starting next year. This new policy will go into effect at the start of the 2020 school year, and the Department of Defense confirmed this policy change to the Capital Gazette on Monday.

According to the Capital Gazette, the Naval Academy previously admitted transgender students, and midshipmen who started to transition during their time at the academy were permitted to continue their education. But after the Trump administration's transgender military ban went into effect last week, the Naval Academy shifted its position to align with the national policy. As a result, Regan Kibby — a midshipman who studied at the Naval Academy and is transgender — is one of six military service members who is suing the Trump administration over the new ban, per the Capital Gazette.

These changes have marked a complete reversal of the Obama administration's decision to lift restrictions on transgender members of the military. In 2016, former Defense Secretary Ashton B. Carter announced that transgender Americans could serve openly, and that the Pentagon would cover any medical costs associated with gender affirmation surgery. The ban that was implemented this month, however, rolls back these protections by preventing anyone who has been diagnosed with gender dysphoria and has received medical treatment from joining the military.