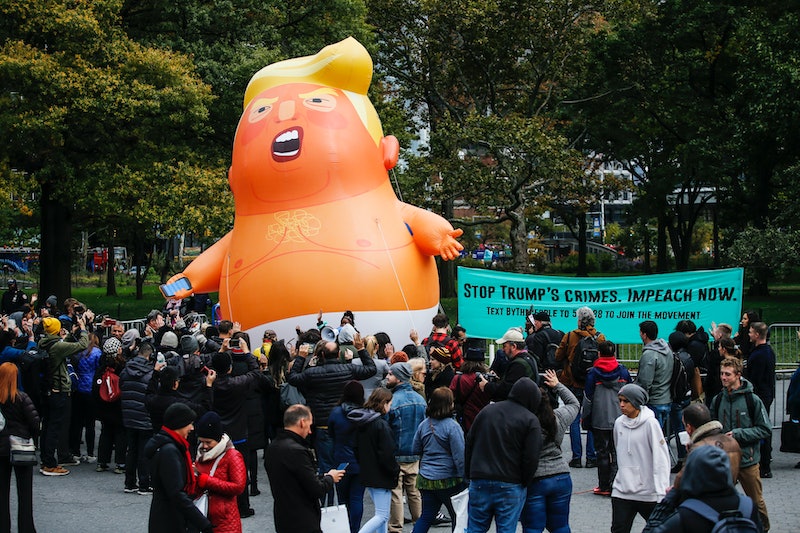 The Trump baby balloon has appeared all over the world, including in London at the beginning of the month when President Trump had his official state visit in the United Kingdom. The large inflatable has yellow hair, orange skin, and — as it's a baby — a white diaper. Now, there are plans to bring the Trump baby balloon to the president's Fourth of July address at the Lincoln Memorial, CNN reports.

The feminist activist group CODEPINK has announced plans to bring the balloon to D.C. in a statement obtained by CNN. "On July 4, CODEPINK will parade the Baby Trump blimp in DC as an all out call to reject Trump," the statement reads. "When Trump speaks at the Lincoln Memorial, let's show him what a big baby he is!"

The blimp was originally going to make an appearance at the military parade that Trump was planning, but with that off, the plan has changed. "We've just switched our plans from the military parade to the Fourth of July," CODEPINK Co-Director Ariel Gold told The Washington Post. "We're appalled that Trump is taking that day to spew his hateful and racist rhetoric... and we really hope this gets canceled, too."

The balloon is just one part of a larger protest. "The president is shifting the 4th of July festivities to celebrate his administration," CODEPINK co-founder Medea Benjamin said in a statement obtained by The Hill. "We will bring together people opposed to the pain and suffering caused by this administration, from family separation at the border to supplying weapons used by Saudi Arabia to kill Yemeni children."

CODEPINK will need a permit in order to hold the protest. The group submitted a request on Monday for a permit to the National Park Service in which it requests "any open grassy area nearest to [the] Lincoln Memorial" according to The Washington Post. Reportedly 40 people are expected to attend, according to the application.

Bringing the balloon to D.C. also will cost some money. The group has a GoFundMe that has raised about $12,000 toward the costs with a goal of $20,000. On the GoFundMe page, they invite the public to join them at the protest, too. "We'd love to personally invite you to our parade on July 4th at the National Mall where we'll have the Baby Trump Blimp flying high for Donald Trump himself to see," the fundraiser reads.

The last appearance of the balloon in London saw the co-creator of the blimp, Leo Murray, speak out about its purpose. "We’re trying to remind the president how unwelcome he is in this country," Murray told Reuters. "We’re also, in a light-hearted way, trying to articulate the strength of feeling against Donald Trump and his politics of hate. We want to put a smile on people’s faces as well as make a serious point."

Trump announced his July 4th event on Twitter. "HOLD THE DATE! We will be having one of the biggest gatherings in the history of Washington, D.C., on July 4th. It will be called 'A Salute To America' and will be held at the Lincoln Memorial," the president tweeted. "Major fireworks display, entertainment and an address by your favorite President, me!"

Now there's a good chance that some of the entertainment might not be to the president's liking.

More like this
8 Charities To Donate To During Black History Month
By Alexis Morillo
Matt Hancock’s TikTok Is The Most Matt Hancock Thing Ever
By Sam Ramsden
Eurovision Has Been Given A Whole New Look Ahead Of Its Liverpool Debut
By Bustle UK
How To Help Those Affected By The Turkey-Syria Earthquake
By El Hunt
Get Even More From Bustle — Sign Up For The Newsletter
From hair trends to relationship advice, our daily newsletter has everything you need to sound like a person who’s on TikTok, even if you aren’t.