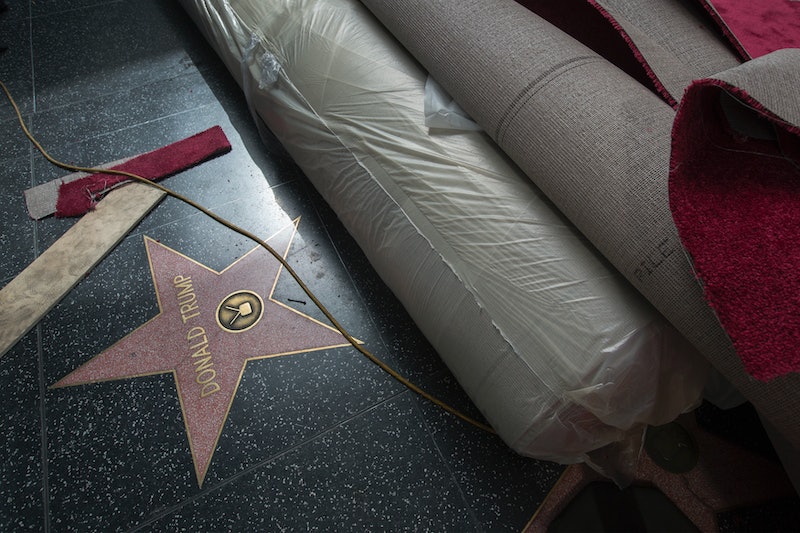 Sometimes, protests can be artistic. You probably already know about Donald Trump's star on the Hollywood Walk of Fame — and how some people have chosen to express their disagreement with the president through his Hollywood star. In the most recent case, a United Kingdom-born artist who goes by "Plastic Jesus" protested Trump's Hollywood star by placing prison bars over it. "Today," the artist tweeted on Wednesday, "I put @realDonaldTrump behind bars."

In comments to the Huffington Post, Plastic Jesus said, "There have been calls to jail Trump since the day he was elected, and today he was certainly put behind bars."

Still, not everyone was amused by the artistic protest, it seems. According to Plastic Jesus, "It was very quickly damaged by a Trump supporter trying to remove it. The bars did appear to be stuck fast and were there several hours later ― to the amusement of thousands of passing tourists."

In the video shared by Plastic Jesus on Twitter, some onlookers try to upend the bars with their feet. But the bars remain firmly lodged over Trump's star. There's a reason for this, Plastic Jesus told the Huffington Post; he claimed to have used "industrial strength double-sided sticky tape."

Financial prudence was mainly the reason for doing so, he noted. "I wanted them to stay down," Plastic Jesus explained, "but didn’t want a bill for thousands of dollars to repair the footpath." The artist shared a photo of the same behind-bars star on Instagram.

You might be hearing of Plastic Jesus for the first time, but he's no stranger when it comes to toying around with Trump's star in Hollywood, Los Angeles. In fact, in 2016, the president's star got the Plastic Jesus treatment after the artist put a miniature border-type wall, with barbed wire on the top, to protest Trump's comments on supporting a wall on the U.S.-Mexico border.

It's not just symbols that get the street spin by Plastic Jesus. In an attempt to demonstrate just how deadly American school shootings are, the artist put bulletproof vests on children's mannequins in different stores across Los Angeles. In his tweet for the protest, Plastic Jesus wrote, "Back to school? Everything you need for the new term. Including Level 3A bullet proof vest."

Plastic Jesus is not the only one who seems to have a problem with Trump's star on the sidewalk. In July, authorities reported that a man vandalized Trump's star with a pickax early in the morning. In photos shared by reporters on Twitter, it looked like the star had been absolutely destroyed to the point where the concrete was dispersed over the sidewalk. Later on, the man who reportedly did it surrendered himself to the Los Angeles police.

In 2016, Trump's star was also obliterated after a protester slammed it with a sledgehammer and pickax. According to authorities, the man was protesting the president's vulgar comments about sexually assaulting women in The Access Hollywood tape, which were published by The Washington Post that year. Based on these protests along with the West Hollywood City Council's request to remove the star (which was denied), it wouldn't be too wrong to say that there are quite a few people in Hollywood that don't want Trump's star around.