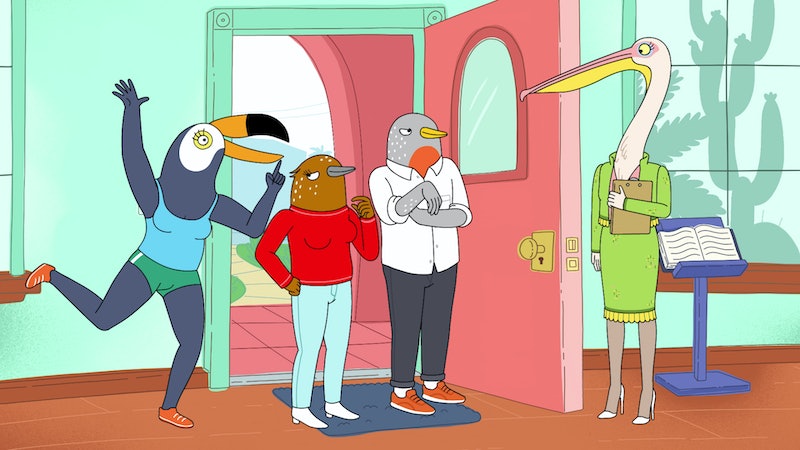 Netflix's Tuca & Bertie will certainly feel familiar to BoJack Horseman fans — and that's for good reason since it was created by BoJack's production designer Lisa Hanawalt. But it might sound a bit familiar too, thanks to the Tuca & Bertie guest stars. The show already has a great leading cast with Tiffany Haddish as Tuca and Ali Wong as Bertie, two bird BFFs in their 30s living in the animated world of Birdtown. Wong has popped up on BoJack before in the "Escape from L.A." episode from Season 2, and some of the other characters who hang out with this toucan and songbird have been on Hanawalt's other show as well.

So even though you shouldn't go into Tuca & Bertie expecting it to be like the Raphael Bob-Waksberg, the shared look and the shared cast will inevitably delight BoJack fans. (And new Hanawalt fans as well.)

Since her breakout role in Girls Trip, Haddish has been in demand and 2019 marked her entering the world of animation with Queen Watevra Wa'Nabi in The Lego Movie 2: The Second Part, an episode of Bob's Burgers, and The Secret Life of Pets 2 in June. Wong will have her own Netflix movie soon enough with Always Be My Maybe out on May 31 and she's done voiceover work throughout her career in movies like The Angry Birds Movie, The Lego Ninjago Movie, and Ralph Breaks the Internet. They're also joined by Bertie's boyfriend Speckles, voiced by Steven Yeun of The Walking Dead, Sorry To Bother You, and Burning.

With this core cast, guest stars are just the icing on top of the bird cage. But there are other characters who live in Birdtown with the Tuca & Bertie Twitter page highlighting the birdwomen's plant neighbor Draca, penguin baker Pastry Pete, and neighbor Dapper Dog. So here's who else you can expect to hear spreading their wings when Tuca & Bertie premieres on Friday, May 3.

More like this
How Much Are The 'Schitt’s Creek' Stars Worth?
By Hugh McIntyre
‘SNL’ Finally Spoofed Nicole Kidman’s Weirdly Beloved AMC Ad & Nailed It
By Stephanie Topacio Long
Jonathan Bailey’s BTS ‘Bridgerton’ Photos Celebrate 6 Months Of “Kanthony”
By Stephanie Topacio Long
'Inside Man' Was Inspired By 'Sherlock' In The Most Unexpected Way
By Catharina Cheung and Maxine Harrison
Get Even More From Bustle — Sign Up For The Newsletter