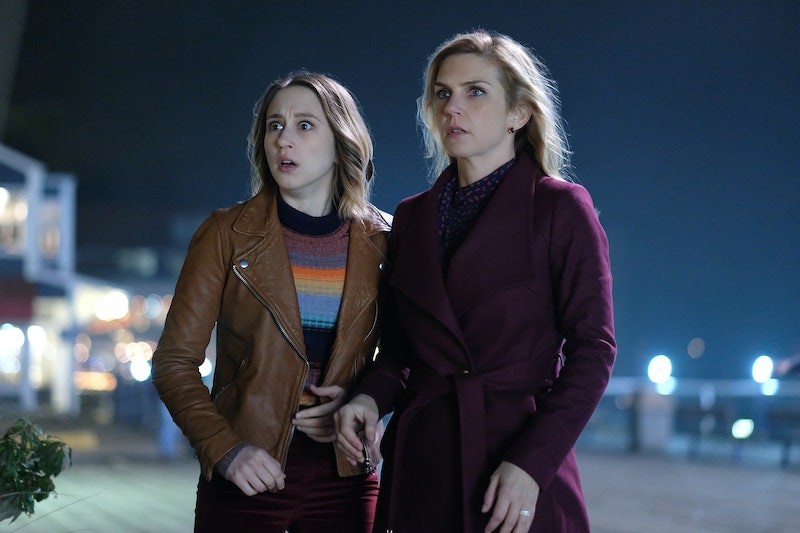 Spoilers ahead for the “Not All Men” episode of The Twilight Zone. Jordan Peele is known for how he uses surreal concepts to explore pressing social issues, and this week's episode of The Twilight Zone is no different. "Not All Men" uses a supernatural plot device — a mysterious red meteor that crashes to earth — to explore issues of male aggression, consent, harassment, and how toxic masculinity is pervasive in a patriarchal society. It's a tense and terrifying episode that leaves two women entirely at the mercy of the men around them, but like any good thriller, there's a light at the end of the tunnel. As Taissa Farmiga, the lead actor in "Not All Men," explains to Bustle, the solution to the problem involves everyone, men especially, making a choice to act with more human decency.

The episode opens with Annie (Taissa Farmiga) taking up an offer for a romantic evening of wine and meteor shower gazing with her coworker, Dylan (Luke Kirby). When the meteors start crashing to earth, Dylan pockets one, with neither thinking anything of it. They start making out, but the mood turns sour; Dylan goes from being pushy to outright aggressive, and Annie flees. She then begins to notice the same disturbing trend: men who come into contact with the meteorite become veiny, rage-induced monsters, where the slightest provocation or rejection sends them on a war path.

The red meteorite can be seen as a stand-in for any number of things: male privilege, violence, and aggression, which all feed back into toxic masculinity. The episode breaks down how coming into contact with — and perpetuating — these vices has a negative affect on society at large, for both men and women.

First, the episode picks apart the idea of so-called "Nice Guys" and how they feed into the toxic dynamic with Kirby's Dylan and Ike Barinholtz's Mike, the husband of Annie's sister, Martha (Rhea Seehorn).

"What does 'nice' really mean at the end of the day? It kind of sounds like a coding for something," says Farmiga, in talking about Dylan, Mike, and the parallels to real life. "What makes a person nice is their actions...Okay, but what does his action show? Do his actions match his words?"

Realizing they can't rely on any man to help them, Annie and Martha make a run for it. As they're hiding, Martha tries to use one of the meteorites to grant her the strength that it gave the men. Nothing happens. "You know why," Annie says. Women can grasp onto modes of masculine power — by being more aggressive in the workplace, acting like one of the dudes, or participating in internalized sexism — but it will never actually, truly benefit them in a way that matters. "Not All Men" makes it clear that until the root problem of male dominance and violence is addressed, everyone will keep hurting.

"I do think men need to step up to the plate and be more involved," says Farmiga, when asked about the idea that Peele is telling men to take more responsibility.

The idea of bro mentality, that boys will be boys, can be seen as a pervasive problem most clearly in the confrontation between Annie's nephew Cole (Percy Hynes White) and his friend Steve (Agape Mngomezulu). It's revealed late in the episode that both Cole and Steve are queer and have likely been experimenting with or dating each other for a while now. Steve wants to drink beer mixed with the meteorite and make out, but Cole feels uncomfortable. Immediately Steve turns aggressive. Cole runs out of the boat and encounters Annie and Martha on the docks, who have to comfort him that he didn't ask for this.

"I swear he's a good guy, he's just obsessed with that stupid rock," Cole cries. The idea that the meteorite — that toxic masculinity — can be both addictive and perpetuated by all men, including someone who is young, queer, and black, and can be weaponized against both men and women, is a strong message of condemnation from Peele.

"Not All Men" may happen in "the Twilight Zone," but the application to our real world couldn't be any clearer.

"You know, the phrase 'toxic masculinity' can be such a dividing phrase. Because people hear 'toxic' and it has like such a negative connotation," says Farmiga. "But we're not saying that men inherently are evil beings, or are inherently naturally violent." It's really just that a patriarchal society hurts everyone. The meteorite can be overwhelming in more ways than one.

In the end it's Cole who provides a way forward for everyone. As Farmiga says, "I do think Cole is the shining light. I do think it says 'Hey listen, just because the group of us are acting this way and it's what is expected of us, that doesn't mean we all have to act that way'."

Cole comes into contact with the meteorite on the docks, but remarkably, nothing happens. His eyes turn red, his skin veiny, and yet in the end he retains who he is. Later, Annie asks him what it was all about. "There's no cure because it will always be inside me," he says. Annie, confused, asks how he was able to resist turning violent. "That’s the thing," Cole says. "I chose to. I just chose to.”

Peele seems to be saying that while all men have the capacity for violence — and indeed, our society even expects and explains it away when it happens — that doesn't mean it has to be that way. Each person, each man, can make an active decision to be better and help foster in a more equal, safe society for everyone.

"At the end of the day, every choice you make is a choice. The way you treat people is a choice. And I think that's an important conversation to have," Farmiga explains. That seems to be the point Peele is making, too.