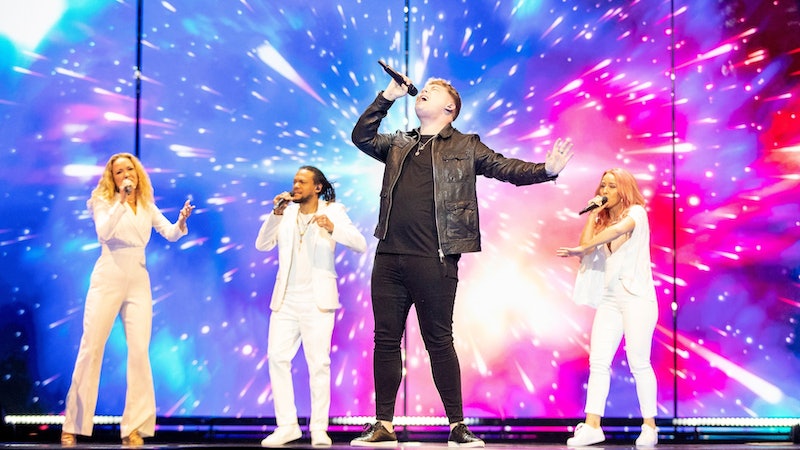 All of the stages have been taken apart, lighting designers have taken well-needed holidays, and umpteen microphones have been packed right away. Yes guys, sadly Eurovision is finished for another year. I know it's hard, but don't cry. This year, perhaps the UK's most enthusiastic entrant ever sadly came in last place. Michael Rice's song, 'Bigger Than Us' got just 16 points, which is sad because, in terms of enthusiasm, he got 100. But guys, can you believe that the UK's Eurovision score just got even worse thanks to a very unexpected turn of events.

OK, so it's not like we have come super last or something — our rank remains the same. Which is, just last.

However, it appears that, instead of the previously believed 16 points from a combination of public and judges voting, what we actually got was, in fact, 11 points.

Oh the humanity! How in the name of pop did this happen? Well seemingly it was down to our old friend human error. Somebody, somewhere is getting fired right now. Nil points for them, y'all.

What happened was the Belarusian jury were dismissed from the competition when they revealed their semi-final votes, as Metro reports. This is a major non-non in the Eurovision Song Contest. The way to deal with this was to calculate a "substitute vote," which sounds harder than trigonometry. That maths skill I learnt at school and use on the daily. Oh no wait.

The officials over at Eurovision went on ahead and made a statement regarding the blip and confirmed it hasn't affected the overall result:

"The EBU can confirm, following standard review practices, we have discovered that due to a human error an incorrect aggregated result was used. This had no impact on the calculation of points derived from televoting across the 41 participating countries and the overall winner and Top 4 songs of the Contest remain unchanged."

Our man Rice, born and bred in Hartlepool, runs a milkshake and waffle business. Taking part in Eurovision was a dream come true for him and hearts across the nation melted when Graham Norton said his "mam and nan" were in the audience. His response to the loss was super humble and chill, despite the result. He said he loved taking part and showed his appreciation for his fans and supporters, according to the BBC:

"I'm so thankful to the fans... as well as my whole team who have supported me throughout this whole amazing journey."

However, after the dust had settled, he may or may not have blamed Brexit for the result, which is low key fair enough. Speaking to The Sun after his performance, he dropped his opinion on the result:

"I always knew I was going to come in this position because of Brexit. Do you know what? If it was Gary Barlow or Elton John, they still probably would have come last too."

Hmm, OK, I'm not sure if I would compare the performance or the song to anything from the aforementioned UK legends but I can totally see what he means.

No news on if John or Barlow intend to compete themselves but, needless to say, it's unlikely.