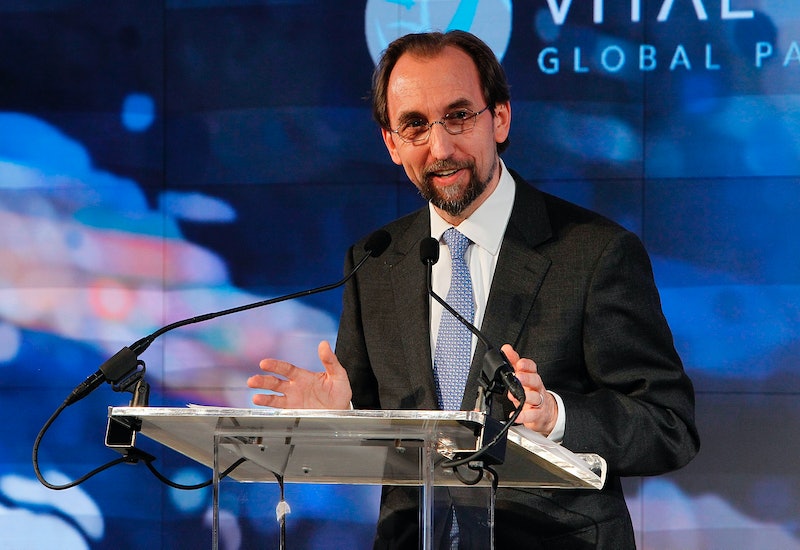 President Trump's decision to sign an executive order refusing U.S. entry to refugees and any other kinds of visitors coming from seven primarily Muslim countries has been met with overwhelming disapproval from world leaders, activist organizations, and regular civilians. On Monday, this list of opponents gained another crucial name. Zeid Ra'ad al Hussein, the UN Human Rights Chief, denounced Trump's Muslim ban for being both cruel and ineffective.

"Discrimination on nationality alone is forbidden under human rights law, " he said. "The U.S. ban is also mean-spirited, and wastes resources needed for proper counter-terrorism."

Trump's executive order will deny entry to refugees from Syria, Iraq, Iran, Sudan, Libya, Yemen, and Somalia for 120 days, during which Trump's cabinet will review the current admission process. All other visitors, excluding diplomats, from the same countries will be refused entry to the U.S. for 90 days. At the conclusion of these temporary bans, Trump and his cabinet will announce their overhauled admissions process. These measures could become indefinite if the new administration concludes that the countries in question are too "terror prone" to risk allowing any entrants into the U.S.

In addition to al Hussein, two UN agencies — the UN Refugee Agency and the International Organization for Migration — expressed disapproval of the ban on Saturday in a joint statement. "The needs of refugees and migrants worldwide have never been greater, and the U.S. resettlement program is one of the most important in the world," read the statement. "UNHCR, the UN Refugee Agency, and IOM, the International Organization for Migration, hope that the U.S. will continue its strong leadership role and long tradition of protecting those who are fleeing conflict and persecution."

Opposition to Trump's executive order also came from within the Republican Party. Sen. John McCain and Sen. Lindsey Graham warned the president that his actions could end up backfiring by feeding in to ISIS's recruitment narrative of a Western world that hates Muslims.

Trump was unmoved by the statement, however, tweeting on Sunday that the two senators were "weak on immigration." He went on to attribute the "big problems at airports" to a "Delta power outage."

Along with his tweets, the president released an official statement on Sunday likening his executive order to Barack Obama's six-month visa ban in 2011 and insisting that the order had "nothing to do with religion."

"We will again be issuing visas to all countries once we are sure we have reviewed and implemented the most secure policies over the next 90 days," said the statement. We'll have to remind him of these words in three months.