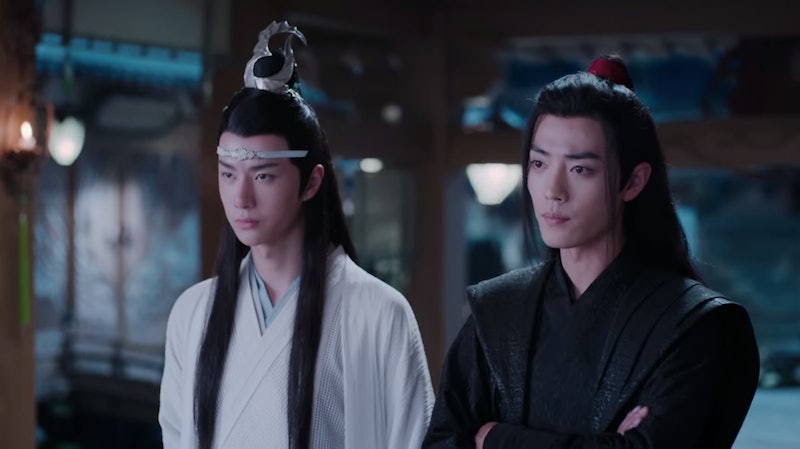 If you wander anywhere near that peculiar sphere of social media known as stan Twitter, you may have noticed some people changing their avatar to photos of long-haired men wearing ancient Chinese costumes. They're characters in The Untamed, one of Twitter's current obsessions. Though the Chinese television series originally aired on Tencent Video from June to August 2019 in China, all the episodes dropped on Netflix in October, allowing it to reach a wider, more international audience.

Capitalizing on the rapidly increasing international fanbase, WeTV English released a shorter special edition for international fans, which you can now watch for free on YouTube. The last episode of this edition came out on Feb. 4, so even though it's been months since Wei WuXian's story was first told in a live-action format, fans are still talking about it.

But what is so special about this show? Are you interested in watching, but are still confused? We're here to tell you everything you need to know about this beautiful, complex story.

What is The Untamed about?

The Untamed is based on Mo Dao Zu Shi (literally "Grandmaster of Demonic Cultivation"), a novel by Mo Xiang Tong Xiu. It is a Xianxia story, which means it is a fantasy adventure heavily influenced by Chinese mythology and martial arts, among other traditional elements. The story is very detailed, so getting lost keeping track of the many characters, clans, and motivations is inevitable.

As characters plot against each other and mysterious murders occur, we mainly follow two people: the irreverent Wei WuXian, who comes back to life after being dead for 16 years, and the stoic, cold Lan WangJi, who partners with Wei WuXian as they try to solve a murder mystery. Their relationship is not the whole story, but it is essential to it.

What's the big deal, then?

Mo Dao Zu Shi is a BL story — "boy love," a term used for works depicting love between men for a presumed female audience. In the original novel, after many adventures together, Wei WuXian and Lan WangJi become a couple, and their sentiments for each other are very explicit. Though the story has been adapted a few times before — there's an audiobook, a comic book, and even an animated adaptation, — the live-action version was bound to attract a bigger audience, especially considering the fact that Xiao Zhan and Wang Yibo, who are both singers in well-known boy groups, play Wei WuXian and Lan WangJi respectively.

So the main characters are gay? But what about China's censorship?

On December 31, 2015, the China Television Drama Production Industry Association posted guidelines that included a ban on showing LGBT relationships on TV. That means fans never see anything as explicit as in the novel between Wei WuXian and Lan WangJi. There are no kisses, so their relationship can easily pass for an adorable bromance, if that's how you choose to see it. But there are a few clues and a lot of symbolism.

In one of the first episodes, for example, Lan WangJi refuses to let Wei WuXian fix his headband. He tells him, in his stoic and must-follow-the-rules way, that the headband can't be touched by anyone who isn't his family or significant other. Just a few episodes later, however, they use the headband to bind themselves together, and Lan WangJi doesn't mind it at all. Considering Wei Wuxian is not related to him, the message is pretty clear.

There are a few other details, too, such as the fact that they consider each other to be their soulmate, or that Lan Wangji writes a song and names it "WangXian," their ship name. But you can (and should) interpret them by yourself. One thing is for sure: though the explicitly romantic moments were excluded from the screen, the love and intimacy they feel for each other are both still apparent.

What about the rest of The Untamed's plot and characters?

The story is very complex. Half takes place before Wei WuXian dies, hated by everyone, and the other half takes place when he is resurrected and no one recognizes him. There are numerous clans — the Lans, the Jiangs, the Jins — with very peculiar rules, styles, and traditions, and we get to see how they fight for power and manipulate each other as the years pass. If you like historical dramas, fantasy, and political subplots, The Untamed is a must.

As for the characters, they're fascinating. Wei WuXian's relationship with Lan WangJi is central to the story, but equally as important are Wei WuXian's interactions with his brother, Jiang Cheng, who we immediately learn was the person who killed him, and with their sister, Jiang Yanli. Female characters who had a much smaller roles in the novel get their chance to shine in the series. And you can't help but love Wei WuXian: he's funny but will kill his adversaries without a second thought, naive but pretty smart, and altruistic to the point he hurts himself. In fact, his selfless need to help other people is ultimately his doom. It's complicated.

Sounds great! Where can I watch it?

All of the episodes are currently on Netflix. You can also watch it on YouTube. But be careful: if you get past the first two episodes and the cheap but somehow endearing special effects, there's no going back.

I'm hooked. When do we get Season 2 of The Untamed?

Once you get to the end of the story, you'll realize there's not much else to be said. All the loose ends are solved and all the characters get what they deserve, so another season is very unlikely. But if you really, really miss it, you can always read the novel and watch the animated adaptation, like many other fans who got obsessed with the series. There are a lot of different versions of Wei WuXian out there. You'll definitely find your favorite.