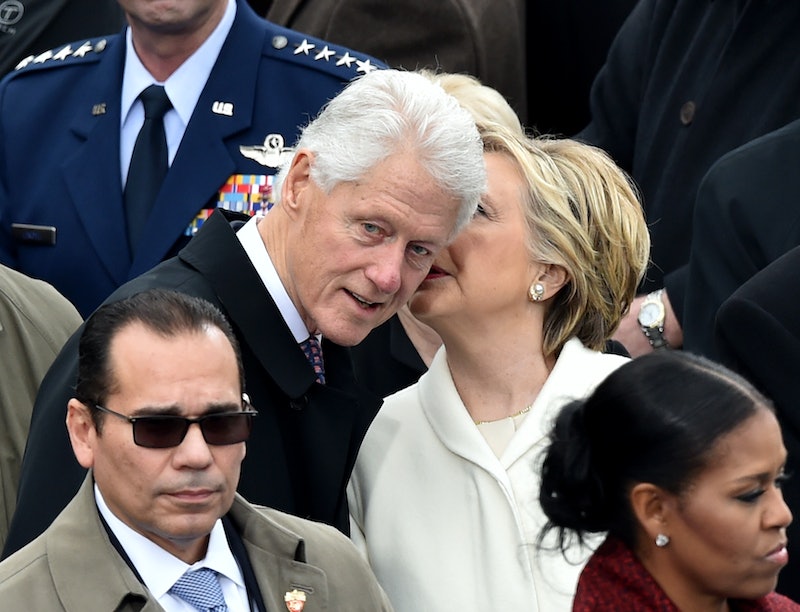 During Donald Trump's inauguration, a GIF of Bill Clinton looking over at someone in the crowd started gaining traction on multiple social media networks. On Reddit, it appeared with a caption insisting that Clinton had been checking out Ivanka Trump and that Hillary Clinton had caught him in the act — despite there being no proof whatsoever that this was the case.

Some commenters, upon seeing the video, have decided that Bill Clinton mouthed "Ivanka," but it appears that he was actually saying "alright" or something similar. But here's the thing: It doesn't matter. Perhaps there is entertainment value in seeing Hillary Clinton turn to look at her husband as he gazes off into the distance, but there shouldn't be — unless he was once again caught staring adoringly at some balloons. Moreover, it should not have resulted in the onslaught of bizarre speculation that it did.

I'm convinced that most people who are making this go viral are not actually invested in the possibility of Bill Clinton ogling Ivanka Trump. However, given that Clinton — a former president — and Donald Trump — the man who is now the 45th president of the United States — both have actually been accused of sexual assault, though both have adamantly denied the allegations, it is not too harsh to say that we have more pressing concerns on our hands at the moment than a ridiculous GIF.

Maybe poking fun at the idea of Clinton checking out Ivanka Trump is how some people find comfort; I understand wanting to be able to laugh at something on such a dark day. But this isn't the way to do it. Clinton could have been staring at anything — a cute puppy, maybe, or into the horizon of what might have been. Alleging that someone is checking someone else out is not even remotely funny, and it's unclear why this GIF started trending.

That people would go so far as to map out the audience as proof that Clinton was maybe potentially possibly looking at Trump is actually proof that this has gone much too far. Making so much out of what is likely nothing, especially given everything that we're about to face under a Trump administration, reminds me that some people will undoubtedly have less to fear or worry about than others.

If you've been sharing this GIF, please take a moment to ask yourself why you find it so funny. It's possible that the answer might not be to your liking.