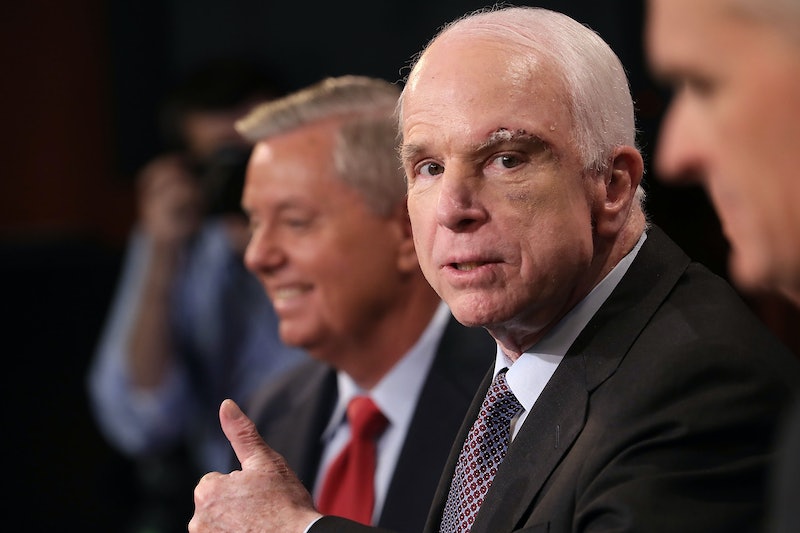 The true magic of technology doesn't lie in social media or cat videos, but the ability to watch the very moment Trumpcare was shut down. Although it wasn't accompanied by fireworks or the ghost of Franklin D. Roosevelt slow-dancing with former President Obama, it's an incredibly important moment. So buckle up, kiddos, because you're about to witness American history being made.

In case you missed it, many Republicans are less than satisfied with the Affordable Care Act (ACA), which expanded healthcare to millions of previously uninsured Americans. Past efforts to repeal the ACA have died a swift and public death every time they've been put to vote, and early Friday morning, the same pattern repeated once again. This time around, it took the form of a "skinny repeal," which aimed to dismantle just a few key elements of the health care law.

The repeal was put to debate this week, but in a dramatic midnight vote, it quickly went down in flames. Perhaps unsurprisingly, all 48 Democratic senators voted against the bill. They were joined, however, by three Republicans: Lisa Murkowski, Susan Collins, and John McCain, who returned to the Senate after being diagnosed with brain cancer. According to Time, McCain said he voted against the repeal because it "offered no replacement to actually reform our health care system and deliver affordable, quality health care to our citizens."

Given that Collins and Murkowski had already announced their intent to vote against the bill, McCain's vote was arguably the most surprising turn of events, and it was instrumental in shutting down the bill. Around 1 a.m., journalists reported that the senator was headed up to the Senate.

His vote took place an hour or so later, and it was reportedly met by gasps and applause. Needless to say, Democrats were the most excited by his decision. You can watch the moment below.

Following the midnight vote, the latest effort to repeal the ACA has failed. "We're going to be living with Obamacare for the foreseeable future," said House speaker Paul Ryan, according to the New York Times.

For now, at least, Americans still have a health care system — unless Trump allows it to "implode, then deal," as he has threatened to do via Twitter. It appears the ACA might be harder to kill than (some) conservatives imagined.