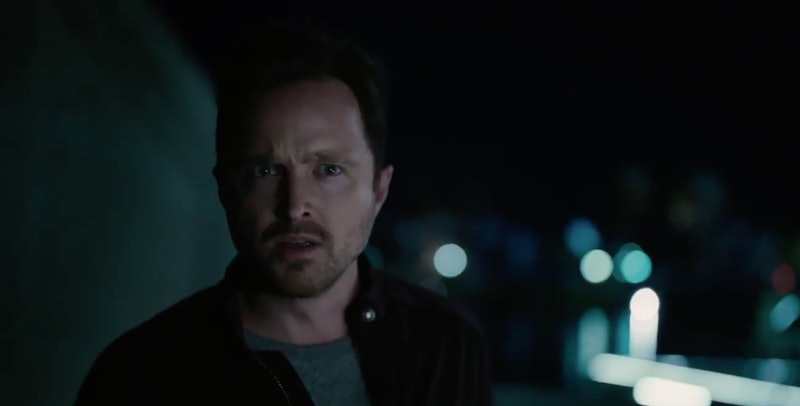 Believe it or not, Game Of Thrones wasn’t the only HBO epic series that people were buzzing about last night — Westworld is now on everyone’s minds again, now that GoT has officially ended. Prior to the GoT series finale, HBO premiered the first Westworld Season 3 trailer, giving fans an extensive sneak peek at new cast member Aaron Paul, and it feels like an entirely new show is coming.

The new footage from Westworld Season 3 focuses almost exclusively on the Breaking Bad actor's mysterious new character, as we get glimpses of a vastly different world outside of the park. It’s a very technologically advanced world filled with beautiful people, flying ships, futuristic cars, and post-modern architecture that’s almost the polar opposite of the wild west sci-fi park viewers have grown accustomed to. But that doesn't mean it's any less seedy or dangerous.

It’s only toward the end of the new trailer that we finally see something familiar: Dolores (Evan Rachel Wood), Westworld's most prized robot host, and leader of the host uprising in Season 2. She pops up as Paul’s character talks of needing to find “something, someone real.” The host crusader looks utterly angry and exhausted, which may be a potential sign that she’s not adapting well to life outside of the amusement park she called home — if that even is the real Dolores.

Paul has joined the show as a series regular for this season, but his exact role is still yet to be officially announced. The new trailer also gives a first glimpse at Season 3’s other new cast members, including Lena Waithe, Vincent Cassel, Scott Mescudi (aka rapper Kid Cudi), and NFL player Marshawn Lynch (yes, really).

According to TV Line, Cassel will play a Westworld villain, but no details about the other characters have been revealed. The trailer does show Waithe, Lynch, and Paul on what looks to be some sort of high-tech heist, which could be a strong clue about who they play in the show. But as with everything in Westworld, we don't know what's actually real and what's not. Sure, they might be criminals in the "real world." But they might also be hosts in some elaborate scheme.

In July 2018, Wood spoke to ComicBook.com about her thoughts on the future of Dolores — spoilers for Westworld Season 2 — whose soul now apparently lives in a host body designed to resemble Charlotte Hale (Tessa Thompson). "I think now, Season 3, she'll be in the real world apparently," the actor said. "And I think that's gonna be really interesting for her because now she is actually alone. Because unfortunately through hard decisions that she had to make, some that she may even regret, we've lost Teddy (James Marsden) which was devastating."

And if you're confused about when you're watching the real Dolores, Wood offered up a useful tip. "If you're like, 'Well when is she Tessa and when is she not?' Any time Tessa is in the timeline with [Gustaf] Skarsgard [who plays Karl Strand], she's technically [Dolores]. So if you go back and watch it, that's how you know the difference. And any time she's with Bernard [Jeffrey Wright], that's really Hale." You can find out if you're able to keep up when Season 3 of Westworld premieres in 2020. But fair warning, neither Karl nor Bernard appear in this new trailer, so who knows just how helpful this tip is really going to be.