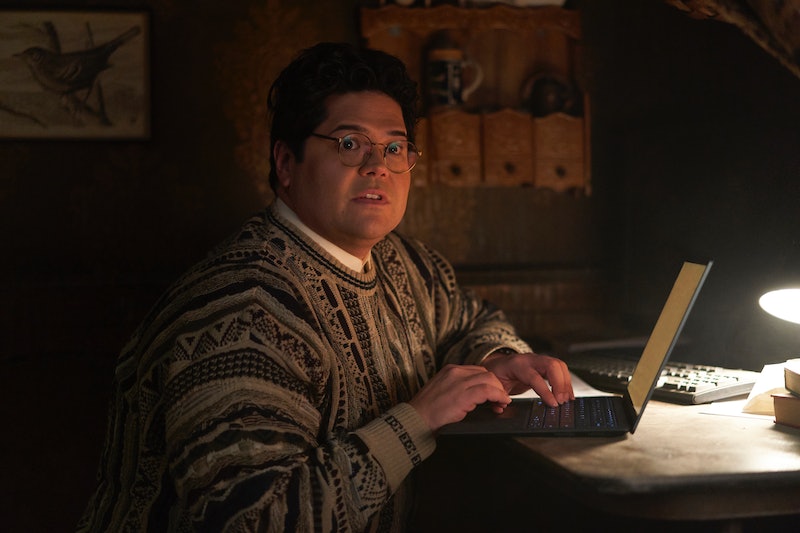 Spoilers ahead for the What We Do In The Shadows Season 1 Finale. As a familiar, Guillermo in What We Do In The Shadows is basically an overworked, undervalued intern. His master, Nandor, is often cruel and abusive, and has continually promised to turn him into a vampire without ever following through. However, the events of the WWDITS' Season 1 finale could completely reverse their power dynamic, and writer and co-executive producer Stefani Robinson tells Bustle that the already confirmed second season "will see that Nandor-Guillermo relationship start to fray for better or worse."

Guillermo has wanted to be a vampire since he was introduced in the What We Do In The Shadows premiere, but his desire peaked in Episode 8 when he learned that a local college student named Jenna had been turned into a vampire fairly haphazardly by Nadja, while Nandor has continued to string him along with false hope.

"It was fun to show the Jenna character transformation because of [how different she is from everyone else] and I think that she's great in the same way Guillermo is a great entry point for a lot of the audiences because they are people of the modern world," Robinson says. She points out that Jenna and Guillermo both share two distinctly human qualities: their vulnerability, and their utter confusion about what's happening to them. But whereas Jenna is confused about her sudden transformation, Guillermo is confused by what isn't happening in his life — namely, why he hasn't been sired as he's been promised for many years.

In the May 29 finale "Ancestry," Guillermo finds out that he may be related to legendary vampire killer Van Helsing. The revelation initially shocks him, until he considers that not only has he already killed a few vampires (albeit accidentally), but that he may be able to channel this lineage in order to push back against Nandor. "I expect to see [Guillermo] grappling with that and sort of feeling a little bit more whether or not he completely rejects that side of his lineage or he completely embraces it," Robinson says of how this development will play out in Season 2.

What We Do In The Shadows' second season hasn't been given a premiere date yet, and Robinson admits that she doesn't yet know what Season 2 will bring for the show or for Guillermo, but she imagines "that we'll be doing a lot with [this] subservient character realizing that he actually has all the power ... I hope to see more of a Guillermo transformation there."

Guillermo is unique to the show not only in that he isn't a vampire, but he seems to be the only one capable of genuine change. While centuries-old characters like Nandor, Nadja, and Lazslo are fairly set in their ways, Guillermo has the ability to decide who he will become. Whether or not that choice leads him to become a vampire or to become the one hunting them will play a crucial part in Season 2.