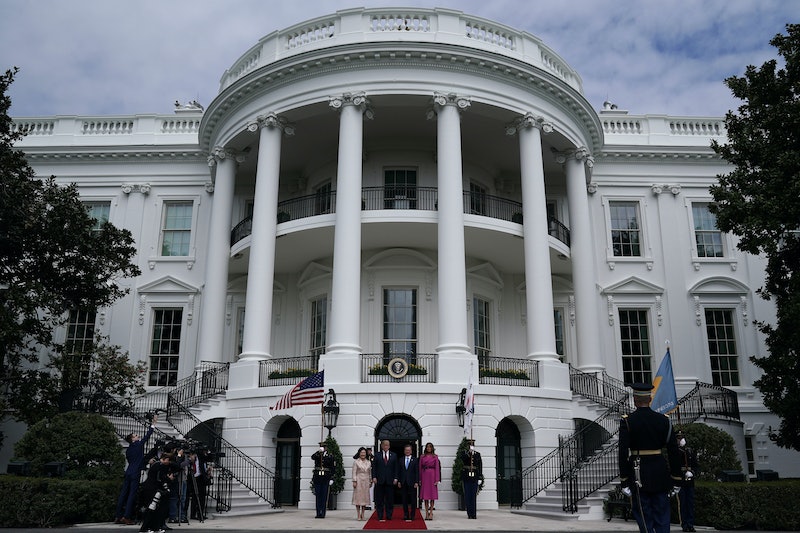 If you're looking for a slam dunk of a joke opportunity, 1600 Pennsylvania Avenue has you covered. The White House apparently has rat traps set up, according to a photo tweeted by Bloomberg reporter Jennifer Jacobs. And although rats are an incredibly common rodent issue in D.C., it seems like a large number of Twitter users couldn't resist such a beautifully delivered metaphor.

According to The Week, the problem of rats has been ongoing in D.C. for a while now, and is only getting worse; the city allocated an extra $906,000 toward addressing the infestation this January. Well, that extra money hasn't been enough to keep the White House from having to put out the type of rat traps you usually see in the alleyways near restaurants in cities.

In response to Jacobs' tweet (which you can see below), a number of people couldn't help but take the literal and turn it into the figurative. Journalist Molly Jong-Fast replied, "They can just tell Eric not to visit," while scientist Grady Booch wrote, "Do they come in larger sizes?"

Another Twitter user replied, "Do they have one that can hold 6'3" 239lb. rat? Actually, it needs to be shorter and wider, the rat lies about its weight."

These Twitter users have the complete right to have fun with this "news," though to be fair, it's not really a shock. As NBC Washington notes, the White House has long had a problem with rats, cockroaches, and mice; the news station procured a number of work orders from the White House in 2017, many of them having to do with infestations of some sort or another. These work orders included reports of mice infiltrating the Situation Room, over four reports of cockroach infestations, and a request for bug lights, to name a few.

In response to these work orders, former GSA Inspector General Brian Miller, who monitored maintenance and repairs to a number of federal facilities, said to NBC Washington, “They are old buildings. Any of us who have old houses know old houses need a lot of work.”

Looks like the work on the White House is never-ending, in this regard. Just last December, Fox News' Chief White House Correspondent John Roberts tweeted, "So - I am standing in our @FoxNews standup location on the @WhiteHouse North Lawn and notice in my peripheral vision something moving at my left foot. I assumed it was one of the ubiquitous WH squirrels. But no....it was a big brown rat."

According to The Huffington Post, the book Real Life at the White House: Two Hundred Years of Daily Life at America’s Most Famous Residence, written by Claire and John Whitcomb, reveals how big of a problem infestations were throughout a number of administrations. This includes that of President Grover Cleveland's presidency in the late 19th century. Via the online publication, an excerpt from the book reads:

When the outside of the house was hosed down during a cleaning, a shower of spiders blanketed the ground. That evening, the white columns were black with them as they crawled back from whence they came. And then there were the cockroaches. One staff member said, "I didn’t know there were so many species of cockroaches as I got acquainted with my daily work."

So no, the rat traps at the White House are not exactly "news" in the traditional sense. But hey, there's no reason to ruin everyone's fun by reminding them how common rat infestations are in the White House.