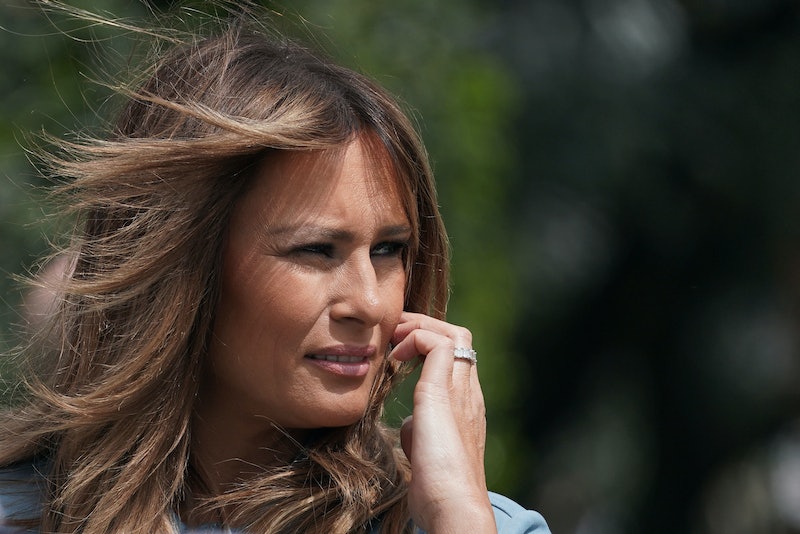 In honor of her 49th year, the White House tweeted Melania Trump a happy birthday on Friday. Although the message the White House wrote was rather ordinary, the image attached to the tweet caught Twitter's attention.

"Happy Birthday, @FLOTUS!" the official White House Twitter account tweeted. Many on social media were puzzled at the photo that the White House selected for the post, however. It depicts the first lady sitting alone on the end of a couch with reporters flanking her on all sides.

"Why is she sitting alone on her birthday?," one user wrote in response.

"This is a really lame picture," author Molly Jong-Fast tweeted. "Why not wish her a happy birthday with a picture of her doing something?

"This is the photo that the White House put out to honor her?" another user asked. "I thought this was from @TheOnion or something when I saw it." Other assorted Twitter accounts called the photo "bizarre," and "objectively weird."

In addition, the composition of the photo — there are two big empty spaces next to Melania on the couch — immediately inspired Photoshop-savvy jokesters, who quickly gave the picture the meme treatment. Various edits of the photo added other people sitting next to Trump, including Vladimir Putin, Keanu Reeves, and a couch potato with Donald Trump's face edited onto him.

According to People, the picture was from a bilateral meeting between the president and Czech Prime Minister Andrej Babis and his wife Monika Babisova in the Oval Office back in March. One user noted that the positioning of the photographers suggests that they were snapping pictures not of Trump, but of somebody else out of frame; a different picture taken from the event shows Babis and the president sitting to Trump's right. Other Twitter users drew attention to the expressions on the journalists' faces.

As of this writing, the president himself has not wished his wife a happy birthday on social media, although according to People, he sent out an email to supporters the night before asking for one million signatures to add to her birthday card.

“I need your help,” the email said, according to People. “Our FANTASTIC First Lady Melania’s birthday is right around the corner, and I want to do something special for her because she is so special to me...We all know that Melania is an INCREDIBLE wife, mother, and First Lady. Help me show her how much the American people love her!"

In 2018, the president acknowledged in an interview with Fox & Friends that he may not have given his wife a birthday present that year.

According to Yahoo News, the first lady will be celebrating her birthday with a private dinner at the White House, which will be attended by Japanese Prime Minister Shinzō Abe and his wife Akie Abe.