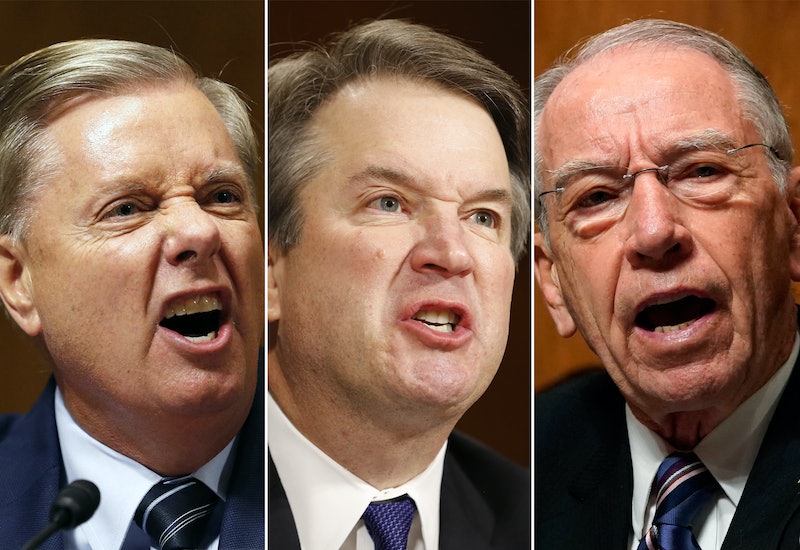 I came in to work thinking that I was just going to watch a Senate hearing — a Senate hearing that I was, frankly, very depressed about. I was prepared to see Christine Blasey Ford, who has alleged that Supreme Court nominee Brett Kavanaugh sexually assaulted her in high school, have her memory and character attacked. I was prepared to see senators try to minimize the allegations, saying that Ford's memory was fuzzy or that the alleged assault wasn't really that bad. And I also expected Kavanaugh to deliver the fairly placid opening remarks that he made available publicly the night before the hearing, prepared to see him again deny the allegations and quietly try to get this whole thing over with.

The whole country was watching. And while we saw Ford's memory be questioned (as expected), we also saw Kavanaugh and the Republican senators who support him create angry legacies that will follow them for the rest of their lives. No matter what happens after this hearing — whether Kavanaugh is quickly voted in or if he is dismissed and disappears from the national stage — their legacies are sealed. He and the senators who support him have become symbols of what happens when men who were raised to believe they would never have to be held accountable for anything, find that they suddenly can be.

I doubt they thought they were carving out their legacies. They probably just thought it was another day at the mansplaining office. Sen. Chuck Grassley interrupted Sen. Dianne Feinstein during the hearing's opening moments. Sen. Lindsey Graham shouted that Kavanaugh had his support still and that this hearing was designed to "destroy this guy's life." Ted Cruz said this trial is one of the most "shameful" chapters in the history of the Senate. Grassley (again) talked with disdain about Ford's request for an FBI investigation. Kavanaugh himself vowed, "You may defeat me in the final vote, but you'll never get me to quit. Never."

This was about whether wealthy, white men in this country are still allowed to get any single thing they want, when they want it.

It did more than make them look out of touch, paranoid, and insensitive about the issue of sexual abuse. The fury and condescension that Kavanaugh and the men who support him expressed Thursday set up a legacy for themselves as men unable to cope with a changing world.

If this really was just a hearing about whether Ford's memories were accurate, why would so many men be exploding with rage over it? This hearing wasn't just about deciding where the Senate falls on Ford's accusations. This was about whether wealthy, white men in this country are still allowed to get any single thing they want, when they want it — be that a lifetime appointment to the Supreme Court, or a hearing to "clear their name." The rage isn't about being unfairly accused. It's about being asked any questions at all.

But the real consequences will be that we saw, in real time, what happens when powerful men are told that not everything they want is theirs. We saw the men who are supposed to be among the most powerful and respected melt down like children. We saw, maybe, a preview of the next phase of American life.

This perspective is reflective of the author's opinion, and is part of a larger, feminist discourse.