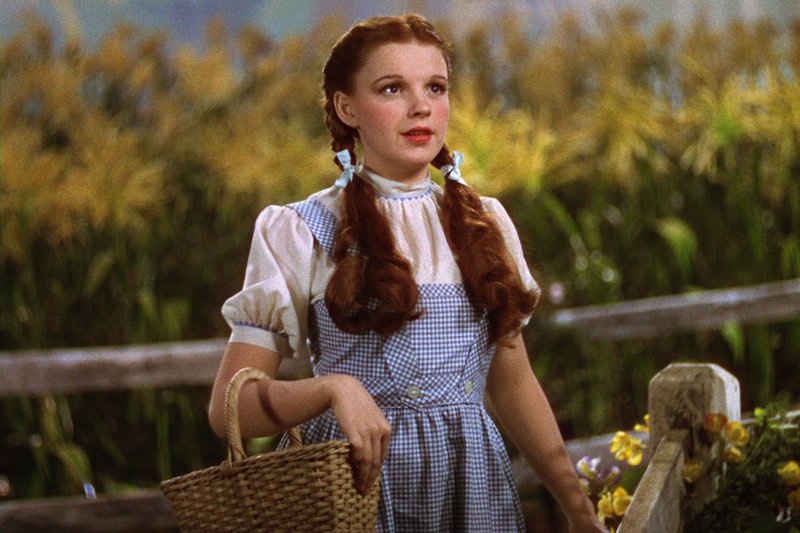 Of all the early American feminists, few were fiercer than Matilda Joslyn Gage. She was a co-founder of the National Woman Suffrage Association, a radical abolitionist who ran a station on the Underground Railroad, and an outspoken advocate for Native American rights who was honorarily adopted into the Mohawk Nation. She fought for increased recognition for woman scientists and for the complete separation of church and state.

She was, in a word, pretty rad.

She was also horrified when her 20-year-old daughter, Maud, started dating a struggling actor and would-be writer named L. Frank Baum. Matilda had no time for disappointing men like Frank. Or, as she put it, according to a Katherine M. Rogers's biography of Baum: she would "not have my daughter be a darned fool and marry an actor."

She wanted Maud to stay in school and study law. Unfortunately for Matilda, though, she had raised her daughter to be just as headstrong as she was, and Maud and Frank got hitched anyway. They ran off together with Frank's theatre troupe, wound up in Kansas, ran out of money, and ended up slinking back home to upstate New York, flat broke and expecting their first child.

Frank was forced to quit the arts and start selling oil cans to support his family (yes, oil cans). But the more time his ferocious mother-in-law spent with him, the more she (begrudgingly) started to like him. Frank was fun and whimsical, and not terribly interested in traditional gender roles. And even Matilda had to admit that he was a good writer.

Finally, after almost two decades of bouncing from failed career to failed career, Matilda insisted that her no good son-in-law try writing a book.

Reading The Wonderful Wizard of Oz today, it's hard to think of it as a radical story. It's simply too ingrained in our culture. Even if you've never read the books, or seen the film, or sung along to Defying Gravity in the kitchen with your roommate at two in the morning, you've almost certainly heard the phrase "there's no place like home." Or you've eaten a "munchkin" donut. Or you've dreamed of going somewhere "over the rainbow." It's easy to think of Oz as just a kids' story that we all know, a cast of recognizable characters who pop up occasionally in Halloween costumes and bad film spin offs.

But when the book was first published, it was actually rather controversial. The Chicago Public Library literally banned the book for "depicting women in strong leadership roles." Other schools and libraries banned it for being "unwholesome" or having “no value for children of today.” Even in 1986, parents were still trying to ban the book in Tennessee for its "depiction of benevolent witches.”

Oz is, after all, full of magical, powerful women, both good and bad. The only male figure of any authority is the wizard, and the entire point of the wizard is that he's a shyster, a fraud with no actual power, who simply uses his maleness and his showmanship to trick people into listening to him. Our gang of heroes are all sensitive, sweet-natured male characters, who have no qualms about following Dorothy. Plus, it turns out that they don't really need extra brains or nerve or hearts in order to be fully-realized people: they all had the power within them all along. And in later books, one of the main characters looks like a boy to everyone else, but realizes that she has actually been a girl the whole time, and takes her true form as the Princess of Oz to everyone's joy and delight.

It's no accident that The Wizard of Oz has become an enduring part of LGBT culture, or that it spawned Wicked, a novel and musical about political female friendship. The Oz stories have always been about capable girls and people who are perfectly valid and happy living as their truest selves. And Matilda Joslyn Gage was the witch who started it all.

OK, so L. Frank Baum deserves at least a little credit for his own creation. But Matilda spent six months out of every year living with Frank and Maud, and she clearly had an impact on Frank's writing (in one letter encouraging him to submit to a writing competition, she suggested that he "maybe bring in a cyclone from North Dakota" for his story).

She was the one who taught him that witches could be good, after all. Matilda wrote at length about the historic persecution of witchcraft, and how it was a targeted attempt to suppress women's intellect. In her view, witches were probably not actually magical, but rather women “of superior knowledge.” As she wrote in Woman, Church and State:

"As soon as a system of religion was adopted which taught the greater sinfulness of women, the saying arose: One wizard for every 10,000 witches, and the persecution for witchcraft became chiefly directed at women."

L. Frank Baum's writing is certainly not free of ugly witch stereotypes. Anyone who's ever been to the internet can tell you that the Wicked Witch of the West is still frequently employed in sexist memes and so forth.

But he balances his Wicked Witches with Good Witches, even a few Good Witches who are actually allowed to be elderly. And there is also Princess Ozma of Oz, and Dorothy Gale, and a number of other human girls and fairies and half fairies (and at least one chicken) who find their way to Oz over the years. Frank clearly understood just how unfair it was to have all of these capable witches ruled by one incompetent wizard—the Oz books are not exactly consistent, but the wizard is a villainous usurper half the time and a bumbling fool the other half.

Picking up the book today, it doesn't exactly read like a cutting edge feminist manifesto. We can thank L. Frank Baum, though, at least in part, for several generations of fierce, female protagonists in fiction. We can thank him for planting the seed of a witch who was powerful and magical without being evil in the public consciousness. And we can hope that Matilda Joslyn Gage, who never lived to see the Oz books published, would have been (begrudgingly) proud.