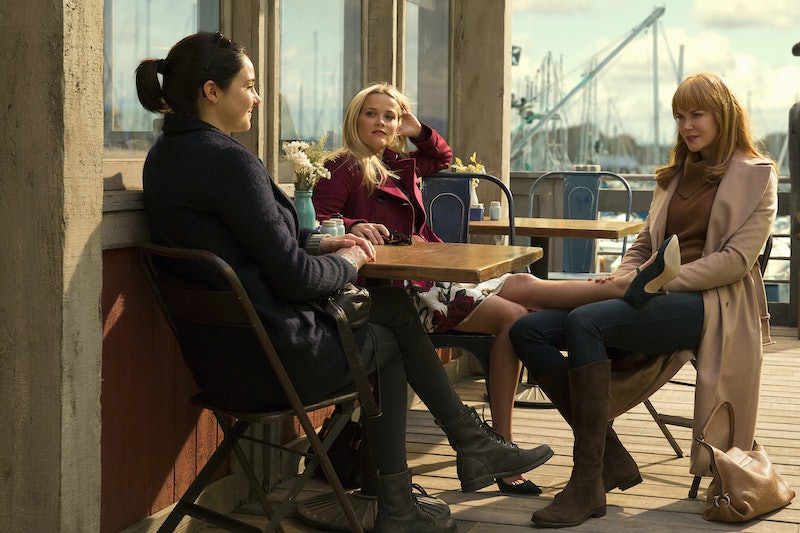 When I think of iconic television shows about powerful, messy female relationships, series like Girls and Sex And The City come to mind. And now, after the remarkable finale on April 2, Big Little Lies does, too. When I mentally added the show to my "favorites" list, subconsciously comparing and contrasting how it held up to shows that highlight similar relationships, I realized something was a bit different about BLL. Here you had a group of powerful, complicated main female characters — all with their own nuances, their own loaded senses of style, but it didn't really seem to matter at all. But even more pointedly: Wardrobe and personal style never became any of the women's defining characteristics, either.

And, even as someone who loves fashion, it was refreshing.

When I think of shows like SATC and Girls, I am immediately reminded of how key fashion was for defining each character and their respective personalities. On SATC, Carrie's style is a hallmark of the entire show, while on Girls, characters like Hannah and Jessa are often personified by the quirkiness and chaos of their wardrobe. On the opposite end of the spectrum, Shoshanna and Marnie's clothing repeatedly served to highlight their rigidness, or naivety. The same can be said of Miranda and Charlotte in SATC. When someone says (as they often do when discussing such shows), "I'm a Samantha," or "I'm a Jessa," the comparison can be linked to personal style as often as it can be to personality. The two things are seamlessly intertwined so carefully throughout each episode that it becomes hard to imagine each character without their particular wardrobes.

Even on shows that aren't inherently fashion-focused, or set in a style capital like New York, subplots and running jokes about fashion are often inserted into female relationships. On Gilmore Girls, there is an ongoing bit about Rory stealing Lorelai's clothes and vice versa. Lorelai's quirky style — wearing cut-offs and tie-dye shirts and bucket hats in a small New England hamlet, for example — is used from the very first episode as a way to outline and emphasize how young and not-like-other-moms Lorelai is.

On shows that don't primarily star women, you'll often find a similar pattern. Claire Underwood on House of Cards, for example, is as powerful and assertive of a character as it gets, and yet she appears in scene after scene picking out a sharp, expensive business dress, getting ready in front of a mirror, or taking said dress off. Her style is often highlighted in media as something iconic or aspirational. Underwood's style isn't more or less remarkable or memorable than that of any of the character's on Big Little Lies (in fact, in some ways, it's quite similar), but because it is inserted into the plot again and again, people take notice of it. It's not featured in a big way, necessarily, but in a subtle, repetitive way that makes you associate her with clothing — and a particular type of clothing at that — without realizing it at all. On BLL, style simply isn't discussed or highlighted at all by the characters.

This is particularly noteworthy because Madeline, Renata, Celeste, Bonnie, and Jane do have style. Even for Jane, who dons hoodies and sneakers throughout the show while the rest of the group is in more obviously expensive pieces — pretty dresses for Madeline, tailored basics for Celeste, expensive trend pieces for Renata, bohemian dresses and skirts for Bonnie — her style is unique and entirely hers. But despite the interesting, varied styles of each character, each episode ended and there wasn't a whole lot of chatter about any of it. Even though most people I know wanted to talk about the show itself, no one chatted me to talk about a dress, or a handbag, or how a character's closet was goals. The clothes were just a distant side note, and none of them (no matter how unique or beautiful) seemed as tied to the characters as they often do on other shows. And this resonated with me.

I love fashion, and shows about style have a specific, very special part of my heart. And, more than that, shows about fashion can be good. They can be powerful, twisted, suspenseful, and critically-acclaimed. To say otherwise would be sexist and inherently, flatly wrong. But powerful female-driven plots, and female characters in general should not be required to discuss fashion. This shouldn't be the default option for defining a personality or outlining a plot. Sure, fashion and clothing can be a helpful tool — but they don't have to be the tool every single time, and Big Little Lies is proof of that.

The specific wardrobe choices for each woman on BLL are clearly deliberate (the costume designer Alix Friedberg has spoken at length about why she dresses each character the way she does). And, because of that, they ultimately speak for themselves. Big Little Lies didn't rely on a subplot or running theme about expensive clothing, or shopping, or getting dressed to emphasize a personality or lifestyle — even though it easily could have.

When you take away Madeline's pretty dress, or Jane's sneakers, or Bonnie's bohemian dress, or Celeste's tailored basics, or Renata's designer jeans, what you're left with is the same raw characters, the same powerful stories, and the same remarkable women.

The show let the clothing speak for itself, and the women speak for themselves. By allowing those two things exist separately, Big Little Lies served as a powerful reminder that women can be many different things — and not a single one of those things has to be dictated by what we wear.