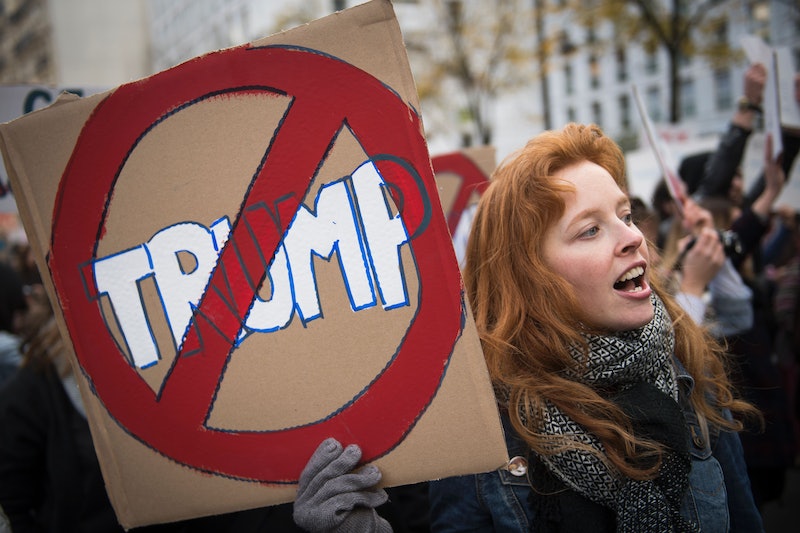 Exactly one week from today, Donald Trump will be the president of the United States — and more than ever before, when it comes to a presidential inductee, people are lining up to protest the ceremony in Washington. The group with the biggest expected turnout is the Women's March on Washington. And their fight is about more than it sounds — Women's March is also fighting for immigrant rights.

Of course, the Women's March is in part about, well, women's issues: reproductive rights, equal pay, paid family leave, and an end to violence against women. But in a recent press release the Women's March laid out their official policy platform — and it's about a lot more than just women's rights, it's about equal rights for everyone, especially the most vulnerable, namely immigrants, in an all-boats-rise-with-the-tide mentality:

Rooted in the promise of America’s call for huddled masses yearning to breathe free, we believe in immigrant and refugee rights regardless of status or country of origin. It is our moral duty to keep families together and empower all aspiring Americans to fully participate in, and contribute to, our economy and society. We reject mass deportation, family detention, violations of due process and violence against queer and trans migrants. Immigration reform must establish a roadmap to citizenship,and provide equal opportunities and workplace protections for all. We recognize that the call to action to love our neighbor is not limited to the United States, because there is a global migration crisis. We believe migration is a human right and that no human being is illegal.

It makes sense — the dangerous and damaging sentiment perpetuated by the campaign of the president-elect promotes a message of separation and other-ness. But in the press release, the organization explains how they aim to join "people of all genders, ages, races, cultures, political affiliations and backgrounds ... to affirm our shared humanity and pronounce our bold message of resistance and self-determination ... recognizing that women have intersecting identities and are therefore impacted by a multitude of social justice and human rights issues we have outlined a representative vision for a government that is based on the principles of liberty and justice for all ... Our liberation is bound in each other’s."

There are a lot of celebrities throwing their hat in the ring like Amy Schumer and America Ferrera, to name a few, and you can too — here's how (even if you can't be in DC).