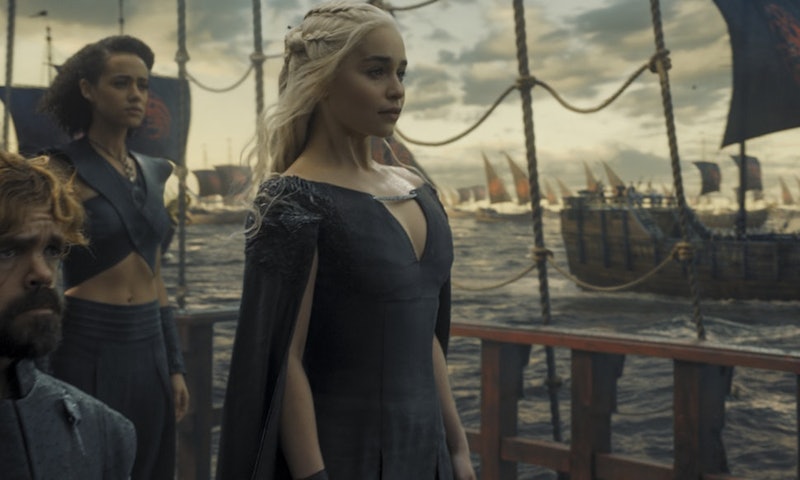 George R. R. Martin is still hard at work on making The Winds of Winter a reality, but he's just provided an update that A Song of Ice and Fire fans will want to hear. There are Game of Thrones prequels in the works, but they're not new books. HBO is looking at five potential prequels to its lauded TV show, and Martin has the scoop on their development.

In a Monday blog post, George R. R. Martin announced that HBO has ordered a pilot for one Game of Thrones prequel, set thousands of years before the events of A Song of Ice and Fire. Martin co-wrote the pilot story with Jane Goldman (Kingsman), who is attached as showrunner, according to Moviefone. The logline reads as follows: "Taking place thousands of years before the events of Game of Thrones, the series chronicles the world’s descent from the golden Age of Heroes into its darkest hour. And only one thing is for sure: from the horrifying secrets of Westeros’s history to the true origin of the white walkers, the mysteries of the East to the Starks of legend . . . it’s not the story we think we know."

Beginning after the war between the First Men and the children, the Age of Heroes comprises all the stories that have informed fan theories about the events of Martin's book series and the HBO show. This was the time period when many of the foundations were laid for Westeros' great houses. Lann the Clever founded House Lannister, the Grey King — from whom House Greyjoy claims to have been descended — set up shop in the Iron Islands, and the first of the Storm Kings reigned at Storm's End, which would later become the seat of House Baratheon.

The Age of Heroes lasted for approximately 4,000 years after the First Men and the children found peace. Halfway through the Age, however, the Long Night began with the first appearance of the White Walkers. During the Long Night, the Night's Watch was founded, Azor Ahai drove back the hordes with Lightbringer, and Bran the Builder constructed the Wall and founded House Stark. Sometime later, the 13th Lord Commander of the Night's Watch married a White Walker woman, declared himself the Night's King, and ruled from the Nightfort. To defeat him, and to restore order to the North and the Night's Watch, House Stark allied itself with the Wildlings to defeat the Night's King.

The spin-offs will be headed by Max Borenstein (Kong: Skull Island), Brian Helgeland (Mystic River), Carly Wray (Mad Men), and Game of Thrones' own co-executive producer, Bryan Cogman, who has written several episodes of the HBO series. In his blog post, however, Martin notes that one of these prequels is no more, but declines to say which. From the author's website: "As for the other successor shows . . . if you have been following along, you know that we started with four, and eventually went to five. One of those has been shelved, I am given to understand, and of course Jane’s pilot is now moving to film. But that does not mean the others are dead. Three more GAME OF THRONES [sic] prequels, set in different periods and featuring different characters and storylines, remain in active development. Everything I am told indicates that we could film at least one more pilot, and maybe more than one, in the years to come. We do have an entire world and tens of thousands of years of history to play with, after all. But this is television, so nothing is certain."

Game of Thrones returns for its eighth and final season in 2019.