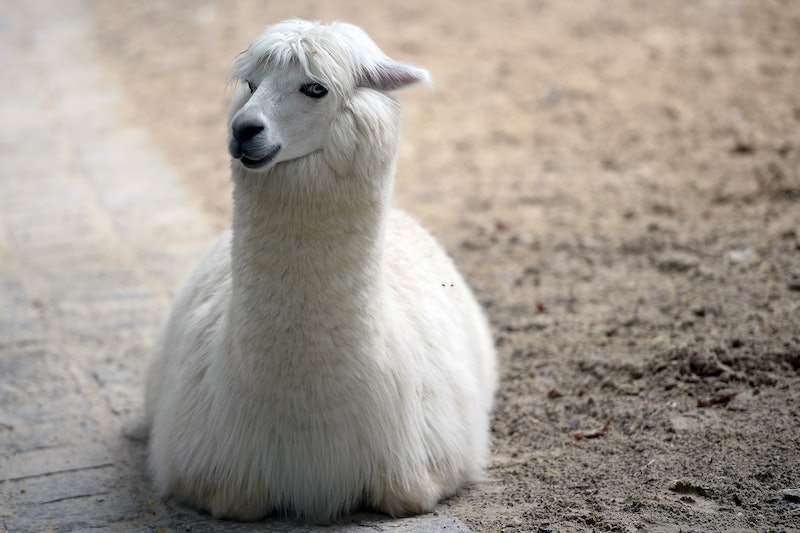 The inauguration of President-elect Donald Trump is actually happening, and many of his supporters are watching live from the National Mall. But these Washington, D.C. anti-Trump protesters have something that's arguably even more eye-catching than the Donald himself: actual llamas at the inauguration.

Yes, you read that right. As if this election cycle hasn't been weird enough, there are actual llamas in the streets of D.C. today, according to BuzzFeed News' Austin Hunt. And llamas aren't the only camelids participating in anti-Trump protests; at least two alpacas are present as well, according WTOP reporter Max Smith. It's not clear what purpose the llamas are serving, other than to possibly boost morale among the protesters, but to be fair who wouldn't be motivated to keep going after seeing a llama's cute, fuzzy face?

And it seems the animal motivation is working; anti-Trump protesters have been all over the city, but especially around the National Mall. Some protesters attempted to block entry points to the inauguration, and three women were even chained together on 10th Street, CNN reported. "We're here to take a stand against the ideas that Trump spouted throughout the course of this campaign — sexism, Islamophobia, his bigotry and nationalism," protester Jed Holtz from New York City told CNN.

Soooo, it's official: We're in the Upside Down.

Outside of the National Mall isn't the only place anti-Trump protests are taking place (though it's likely D.C. is the only urban city where llamas and alpacas are part of the protests). Protests, many of which were organized through social media tools such as Facebook events, are taking place across the country, and even internationally.

Trump supporters are still showing up for their president — but they aren't filling the National Mall to its capacity. Despite Trump’s tweet encouraging his supporters to “set the all time record!” for inauguration attendance, planners only expected 800,000 people, which is less than half the 1.8 million people at President Barack Obama’s first inauguration in 2009, Politico reported. If you want a more visual representation of how much attendance has shrunk since the last two inaugurations, you can check out these photos collected by Buzzfeed News.

In the meantime, much of downtown D.C. has been shut down due to the inaugural festivities, which include a parade. Five metro stations have been closed. Of course, this won't impact the llamas — after all, they don't ride the subway.