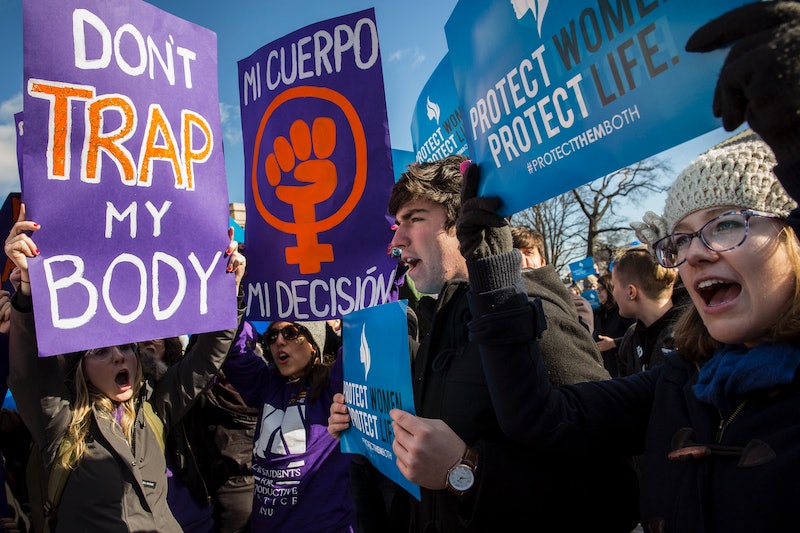 Have you ever felt the call to go counter-protest at an abortion clinic? You know — protest the protestors? I have. I think that what abortion clinic protestors do is wrong and part of me absolutely itches to get in their faces and fight back. But, unfortunately, a lot of abortion clinics say that counter-protestors actually do more than harm than good by escalating an already volatile situation outside the clinic. So what’s a dedicated pro-choicer to do? I have the answer: Join the #ExposeFakeClinics movement and protest outside fake abortion clinics.

Did you know that there are over 4,000 fake abortion clinics — which is about five times the number of real abortion clinics — in the United States? They’re called “crisis pregnancy centers” and they spread false information about abortion, get in the way of women trying to have abortions, and shame women for getting pregnant in the first place. They even have people who dress up like doctors who pretend that they’re actual medical professionals in order to be more convincing. Across the country, these unlicensed, unregulated clinics are targeting women — and, in particular, women of color — at their most vulnerable.

At a recent protest in front of a crisis pregnancy center in Pittsburgh, Lizz Winstead, founder of the pro-choice activist and performance group Lady Parts Justice League, went head-to-head with a woman who was dressed like a nurse. Turns out, she wasn’t a medical professional at all.

“The whole thing was just crazy,” Winstead tells Bustle. “She lied right to our faces about the information they pass out at their clinic, when two of our staff had gone in and gotten information that said if you have oral sex, you’re at a very high risk of HIV. And that’s just not true.”

Sound too weird to be true? Unfortunately, it gets worse. Not only do these clinics spread false medical information and pressure women to continue their pregnancy, but some are funded by taxpayer dollars. Yup, you read that right: Your money could be going to fund these misleading, damaging clinics. While we saw 46 anti-abortion laws put in front of state legislatures within the first two weeks of 2017, California is the only state that regulates what crisis pregnancy centers can tell women. The only state! Of all 50 states! And other states — like Texas — are actually increasing funding to crisis pregnancy centers, while simultaneously defunding real women’s health centers, i.e. Planned Parenthood. This is some weird, backwards, upside-down BS.

If the idea of women being lied to and shamed while they’re trying to decide what to do about an unplanned pregnancy infuriates you, then welcome to the #ExposeFakeClinics movement. Created by the Abortion Access Hackathon and Lady Parts Justice League and supported by a long list of partner organizations, #ExposeFakeClinics is having a week of action from July 17 to July 26. The goal is to spread the word about crisis pregnancy centers and to fight back, both online and IRL. Want to get involved? Here are some ways you can help #ExposeFakeClinics.

More like this
The 19 Best Tweets & Memes About Bisexual Awareness Week
By Lexi Inks
Are Quality Time & Gift-Receiving Love Languages Compatible?
By Lexi Inks
How To Politely Reject Someone Who Keeps Asking You Out
By Laken Howard and Lexi Inks
Why A Libra & Libra Couple Might Become Codependent
By Kristine Fellizar
Get Even More From Bustle — Sign Up For The Newsletter