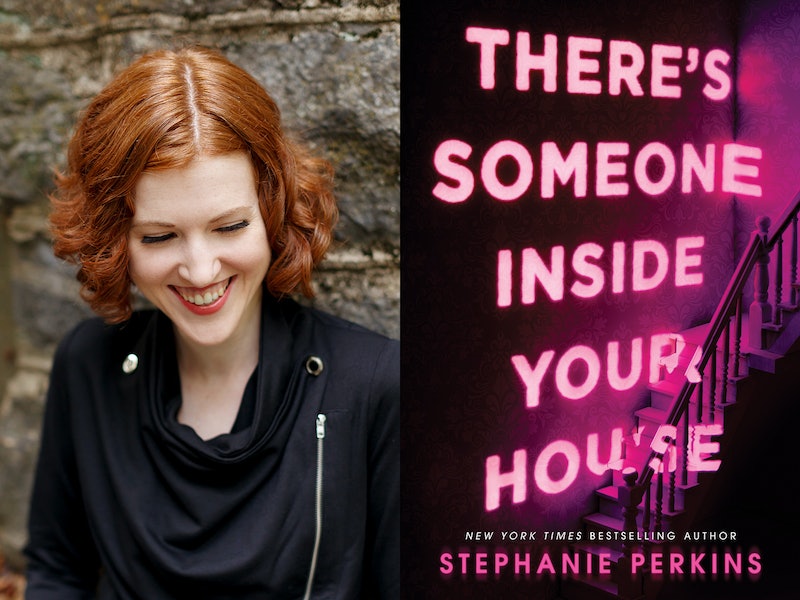 There's one image of Drew Barrymore — guts out, hanging from a tree in front of her home in the opening scene of Scream — that is forever imprinted upon my brain. The cruelty, the gore, the unimaginable disregard for humanity displayed in this one, single image is almost too terrifying to contemplate. But, as anyone who has seen Scream knows, the next scene is... well, kind of funny. It's as much a comedy flick as a horror movie; as much a thoughtful, nuanced coming-of-age as a slasher flick. It's that same delicate balancing act that makes Stephanie Perkins' new horror YA book, There's Someone Inside Your House, so addictive.

Horror — and gore, particularly — might seem like an odd choice for Perkins, especially since this is her first novel in over three years. For the uninitiated, Perkins is beloved in the YA world for her rom-coms — Anna and the French Kiss, Lola and the Boy Next Door, and Isla and the Happily Ever After — two of which take place in a Parisian boarding school. Those three books are gauzy, gushy dreamscapes — quite the opposite from her latest work.

"People who don’t know me personally were startled, of course, but it made perfect sense to my friends and family," Stephanie Perkins tells Bustle. "I’m a huge horror fan. My house is year-round Halloween. Also, I feel like there’s this dangerous assumption out there that people — usually women — who enjoy more traditionally feminine things like romance novels or vintage dresses — like me – are typically only that one thing. But nobody is one thing."

There's Someone Inside Your House by Stephanie Perkins, $13, Amazon

There's Someone Inside Your House follows Makani, a Hawaii-native who's been living with her grandmother in Nebraska since a mysterious incident forced her from her childhood home. ("After that... [her parents] couldn't look at her at all anymore," Perkins writes in the first chapter. "She didn't like looking at herself, either. She deserved this exile.") But what she finds in the American Midwest is more horrifying than the past she's running from: there's a serial killer on the loose, and they're only murdering teenagers.

And the boy she's had a crush on forever —  pink-haired, quiet Ollie — might be the killer.

Like in Scream, this book doesn't skimp on the gore — the murders are brutal, bloody, messy, psychologically troubling, and worst of all, narrated in extreme, precise, gruesome detail. "Gore isn’t for everyone," Perkins says. "It felt natural for me to include it simply because I do like that kind of horror, as long as it serves a narrative purpose. Perhaps this sounds terrible, but I watch The Walking Dead because I enjoy how the writers and special-effects artists are forced to continually come up with new ways to kill the zombies. There’s a lot of creativity there!"

"So no, it wasn’t difficult emotionally for me to plot the murders," she adds. "The challenge was on the creative level."

The identity of who is perpetrating such disturbing crimes doesn't stay a mystery for long; Perkins bucks tradition and unmasks the killer about halfway through the book. Although the murderer's identity is known both to readers and to the characters for the second-half of the novel, Perkins is still able to maintain a level of propulsive suspense and terror.

"This was one of the trickier aspects," she says. "It’s impossible for me to discuss all of my reasons for breaking narrative tradition without spoiling it, so I’ll just say this: I don’t believe the killer is the most interesting person in stories like this, whether it’s fictional or true crime. For me to care, it has to be about the victims and survivors. That’s who matters."

And it's the victims and survivors who truly shine through; each character, whether or not they live or die, are given a detailed backstory. They are fully-fleshed human beings with inner selves and outer selves that often contradict each other. It's that contradiction that makes Makani so fascinating; she's Native Hawaiian and African-American, at a loss about her new home, ashamed of her past but afraid to make it right, and both thrilled and terrified by the prospect of falling in love with Ollie. Though teenagers are dropping like flies around her, Makani still spends a fair bit of time joking around with her friends and forming a deep intimacy with Ollie.

"As for the balance between scary and funny, I think that’s what makes the slasher genre unique from other types of horror. It’s common for slashers to use humor to alleviate tension," Perkins says. "They’re often very funny and self-aware, which is what I’m interested in — in any context or in any type of story."

So will Stephanie Perkins ever return to these characters again, or to YA romance? "Perhaps and perhaps! This book actually is connected to my other books," she says. "But I’ll let my most avid readers discover the Easter eggs."

There's Someone Inside Your House by Stephanie Perkins, $13, Amazon