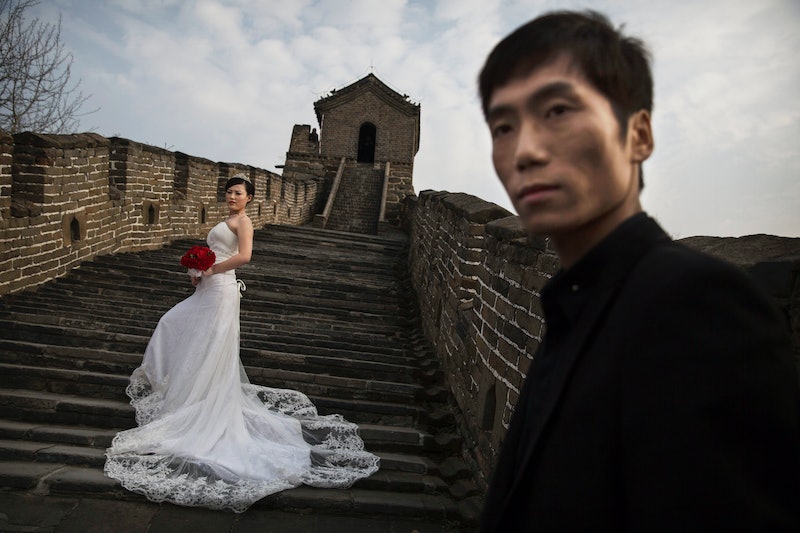 If you grew up in the West, you might have thought that exchanges of money between families when their children got married was a practice that ended at least centuries ago. That practice is still a normal thing in some parts of the world, though, and one of them is China, where the so-called "bride price" isn't just a normal thing — it's actually going up, and this is causing huge problems in society.

For low-income families who want their sons to get married, the bride price can prevent that from ever happening, The Washington Post reported. In one small village north of Beijing, the average price that parents of sons would have to pay the parents of the potential bride was $38,000 — but the average yearly salary in the village was one-fifth that amount.

The direct cause of these inflated bride prices isn't a tradition that developed over the millennia; instead, it's the one-child policy that China had in effect between 1979 and 2015, which aimed to cut population growth by limiting families to one child. The policy successfully cut births by 400 million by the time the Chinese government terminated it, The Post reported, but it left Chinese society with numerous unintended consequences.

For example, the Chinese population currently has about 34 million more men than women, according to The Post. That is approximately equivalent to the entire population of California, and is also the number of Chinese men who will not be able to find women to marry unless they look abroad. This problem is also exacerbated by the urban-rural divide in the country, because according to Chinese social and cultural site What's On Weibo, there are more unmarried men in rural areas and small villages and more unmarried women in bigger cities.

Under the one-child policy, female fetuses were often selectively aborted and infants were killed upon their birth, according to the BBC. Male children were valued more for their labor potential and their traditional role of looking after the parents in their old age. Now, the BBC wrote, that manufactured shortage of girls has pushed the bride price up from the traditional small token gift, like a set of bedding, to items and cash totaling the equivalent of tens of thousands of dollars.

This, as The Post laid out, is a particular problem in small villages where people have low annual earnings. City officials are now reportedly trying to limit the bride price to something more reasonable: $2,900, rather than the current average of $38,000. When you turn back to the cities, though, the traditional pressure for women to marry young has turned a whole class of professionally-oriented women into “leftover women,” according to the South China Morning Post. If a woman isn't married by 25, then society gives her that designation — and the problem is most pronounced in the cities, which are full of women who left their villages to get a better education and a better job.

All of this, though, is connected to the broader problem of gender inequality in China, as Human Rights Watch noted. The country officially forbids gender discrimination — part of the communist on-paper commitment to equality — but it's perfectly normal for male leaders in business and academia to express their views about how men are superior. The anti-discrimination laws are hardly ever enforced, according the Human Rights Watch — much like the bride price limits would be.