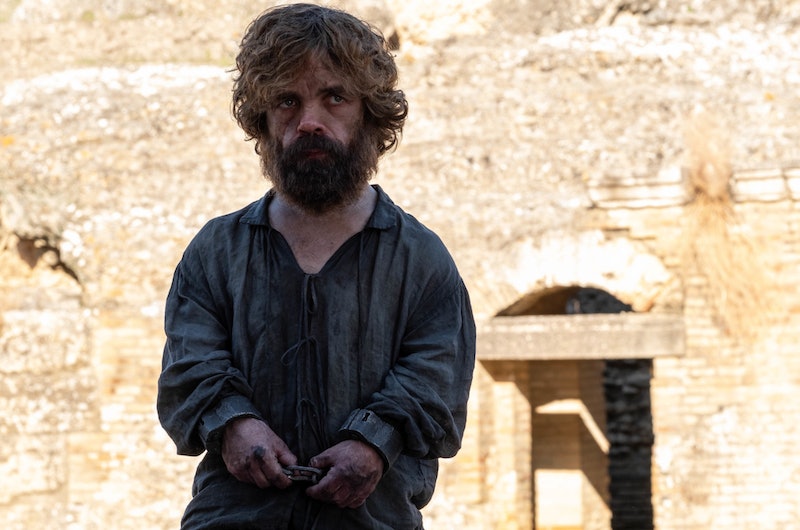 Con-dragon-ulations, my fellow Thrones fans. We made it to the bittersweet finish line that is the 73rd episode of Game of Thrones Season 8. Winter has come for the last time, and now we shall warm our hands over the piping hot Game of Thrones series finale tweets. You cannot throw a Hand of the Queen pin at your Twitter feed without hitting a GoT finale joke, and thank goodness for that. As polarizing as the show's final season was, there is one thing many fans probably agree on: Game of Thrones will be missed. It is so hard to say goodbye to Wester-day, and I will take all the silly GoT memes and jokes and GIFs I can get.

This goes without saying/you do not have to be the Three-Eyed Raven to figure this one out, but there are Game of Thrones Season 8 finale spoilers ahead. If you haven't watched the final episode of the series but are serious about avoiding spoilers, what are you doing? Look away!

Now that the warning is out of the way, it is time to get meme-y with it.

1. Who Do You Think Would Be On Bran Stark's Favorite Contacts List?

Followup question: Can you imagine trying to talk to Bran over the phone? He's not exactly much of a conversationalist when face-to-face, and I doubt he reins in his Three-Eyed Raven-ness when he's got someone on the horn. Like, you know the second you start telling him a story about your coworker who refuses to admit they are the one who spilled the coffee creamer all over the inside of the office refrigerator, he goes and hits the mute button and starts warging. Dude is not going to listen to your rant about break room etiquette when he could be out flying around a volcano or whatever.

2. Way To Not Use Those Three-Eyed Raven Powers For Good, Bran

On the other hand, at least he didn't give away any spoilers.

3. GoT Really Did Give Us Twists & Turns Up Until The End

Who knew it was that easy? Sansa, apparently.

5. The Night's Watch Out For That Cup Of Water

8. Just Call Her Brienne Of George

Or Regina of Tarth? Or Brienne of Plastics? Burn Book Of Tarth?

10. Did Tyrion Miss The Memo About Arya Killing The Night King Or...?

Seriously though, how are they not always talking about that one time Arya killed the Night King?

...If it wasn't for his meddling conscience.

13. And Finally, Jon Snow Rights One Of His Wrongs

We have forgiven Jon for sending Ghost away without a proper goodbye, but we have not forgotten. The Twitterverse remembers.