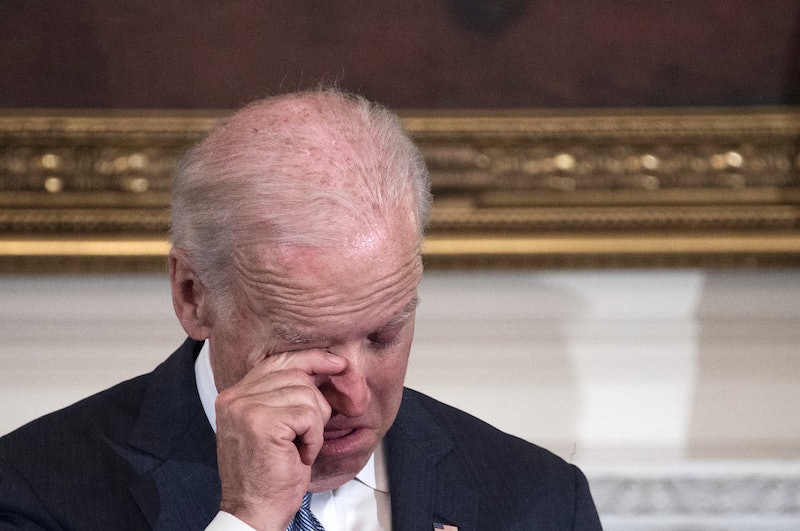 President Obama has made no effort to hide his affection for Vice President Joe Biden, and included a touching tribute to the vice president in his farewell speech on Tuesday. But the president truly outdid himself on Thursday, when he surprised Biden in public by presenting him with the Presidential Medal of Freedom. It was one of the most touching moments of Obama's presidency — a ceremony joyous enough to melt even the stoniest of hearts. There were some pretty emotional reactions to Biden's Medal of Freedom ceremony on Thursday, and that's not a surprise — it was almost too heartwarming to handle.

"The best vice president America's ever had: Mr. Joe Biden," Obama said at the ceremony. "To know Joe Biden is to know love without pretense, service without self-regard, and to live life fully. As one of his longtime colleagues in the Senate, who happened to be a Republican, once said, 'If can't admire Joe Biden as a person, you've got a problem. He is as good of a man as God ever created.''" (It was Lindsey Graham who said that, for the curious).

Obama extolled Biden's virtues for almost 15 minutes, speaking fawningly about not just their relationship, but of the friendships that have developed between their spouses and children as well.

"Even though our terms are nearly over, one of the greatest gifts of these past eight years is that we're forever bonded as a family," Obama said.

And then, he announced — to Biden's shock — that he was presenting the vice president with America's highest civilian honor: the Presidential Medal of Freedom. He gave it to Biden with distinction, an official designation that Obama has never used before during his presidency.

Biden broke into tears. And so did the rest of the country.

A Friendship For The Ages

Chicken Soup For The Soul

It's a dark time in American politics, but the look on Biden's face when Obama gave him that medal was a beacon of light.

The Exception To The Rule

There aren't too many men worth shedding a tear for this year, but POTUS and VPOTUS are the exceptions.

Watching those two on stage, it's hard not to.

Even Republicans Dig It

Even former chief strategists for George W. Bush were touched by the ceremony. Well, at least one of them was.

It's true: Even Biden and Obama were surprised by how close they became.

Do Obama-Biden count as a celebrity couple? If so, they're one of the best.

I Swear I'm Not Crying

What a coincidence — this keeps happening to me, too.

Squeezing In A Cry On Break

That's what breaks are good for.

The Most Beautiful Thing In The World

You might think this is an overstatement. But then you'll watch the video, and you'll realize it's not.

The Situation Has Been Compromised

That's actual footage from the ceremony, believe it or not.

Too Much To Handle?

Just speaking for myself here, but the answer is, "not enough."

A Friendship Fit For A Greeting Card

Is this a thing? Can we make it a thing?

I am legitimately having a hard time keeping it together, guys. For real.

Will The Tears Ever End?

Veronica won't be the only one.

"This also gives the Internet one last chance to talk about our bromance," Obama said at the ceremony. He was wrong about one thing: This isn't going to be the last time.