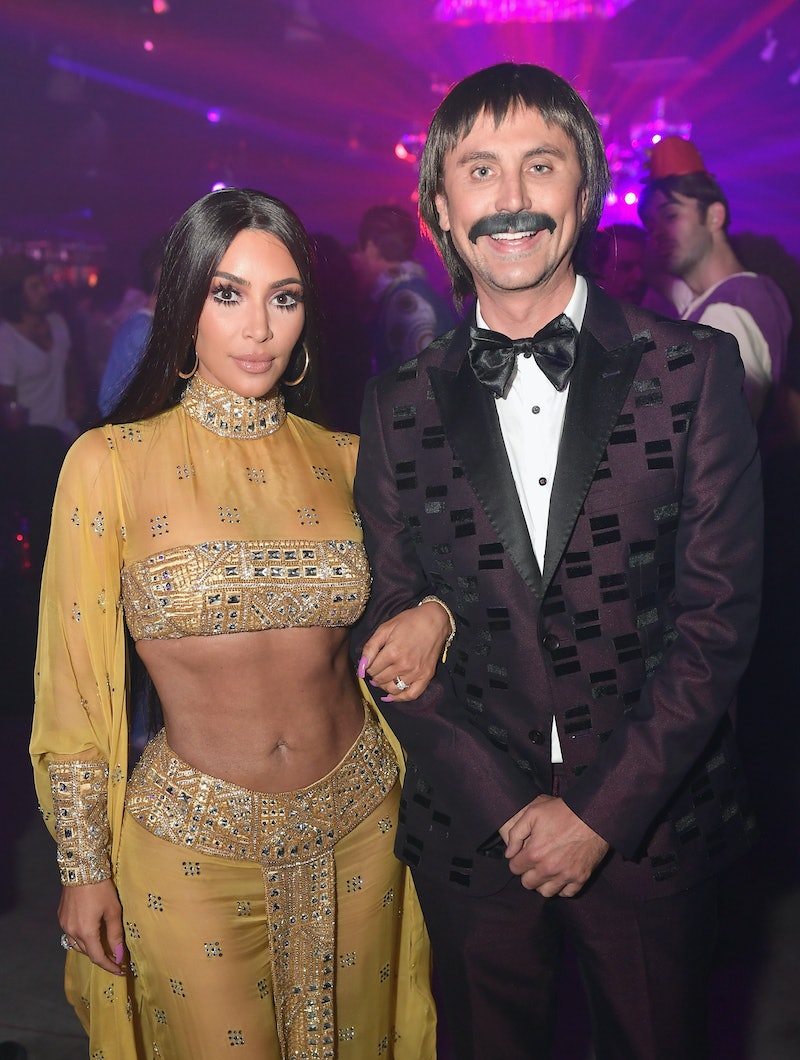 As much fun as it is to dress up for Halloween, one of the best parts of the holiday is seeing what Hollywood comes up with. Amazing celebrity Halloween costumes have been everywhere this year, and fortunately, nobody's been too shy about sharing them on social media. What's better than scrolling through Instagram on October 31 and seeing your favorite stars dressed up for the occasion?

Halloween 2017 has a lot to offer, from adorable, coordinating family costumes to totally hilarious ones. And then, of course, there are celebs like Kim Kardashian who have made Halloween into a several day event with a different costume for each celebration she attends. And somehow, just a little extra spooky joy is injected when we get to see celebs and their kids transform every year. Seeing little kids show up at your door dressed as Moana and a pirate while they're trick-or-treating? Adorable. Seeing Neil Patrick Harris' children as a bearded lady and a strong man as part of the traditional group costume with their dad? Well, nothing beats that.

In case you're looking for ideas for next year, these impressive looks should provide you with plenty of inspiration. This Halloween definitely did not disappoint.

NPH was in American Horror Story: Freak Show, so is it really that surprising that he decided to take inspiration from that season's theme? His family's group costumes are always incredible, year after year, and this time, it was no different. How adorable are Gideon and Harper? If only David Burtka's clown was actually Twisty.

A Lego ninja and a bunny don't exactly go together, but Duff and her son, Luca, were adorable together anyway.

Madonna to Kourtney Kardashian's Michael Jackson, Aaliyah, and, of course, the Cher to Jonathan Cheban's Sonny... Kim has been very busy this Halloween season, but what else is new?

What do you dress up as if you're the voice of Princess Anna of Arendelle from Frozen? Elsa, of course, because according to Bell, she was just filling her daughter's request. It's fine — everyone knows Bell is really the superior Anna at heart.

Somehow, Kloss managed to flawlessly pull off Marilyn Monroe to the point that she was almost unrecognizable. The combination of the dress, hair, and makeup really pulled the whole look together, making her look so convincing as Monroe.

No one is quite sure what Adele is supposed to be dressed up as this year, but she's Adele — does she even need to explain anything she does, let alone her Halloween costume? The jury's out on who she's attempting to be, so for now, it remains a mystery... even though anyone with eyes can see that she looks amazing.

It would be hard to imagine Lauren Conrad doing anything harmful to puppies, but still, she pulls off Cruella DeVil so well. Her hair looks amazing, and the red pop of color from her gloves is the perfect finishing touch. Now all she needs is a family of 101 dogs. Surely, that can't be that hard to find, right?

Apparently not, because Cardi B.'s rendition of the Disney villain included a real life dalmatian. Throw in the throne, and it's hard to say who wore it better.

Here's an unexpected Halloween pairing. Over the weekend, Sarah Hyland Wells Adams (yes, that Wells, from The Bachelorette and Bachelor in Paradise) went to a party dressed as Eleven and Dustin from Stranger Things.

It seems so typical of Plaza to dress as Wednesday Addams... but then again, her Parks & Rec character, April Ludgate, totally would have killed this costume, too. Can we bring that show back, please?

Paltrow took the opportunity to dress as her character from the 1995 movie she starred in with Brad Pitt, Se7en. Being your own severed head for Halloween? Pretty impressive.

At the Halloween party hosted by their husbands' tequila brand, Amal Clooney and pal Cindy Crawford dressed like they were straight out of the '70s disco era. And obviously, they're both perfect, as per usual.

Khloé and Thompson decided to dress as Game of Thrones characters Daenerys and Khal Drogo for LeBron James' Halloween party. And they won Best Couple's Costume!

Bey and Jay went for a '90s throwback look and went as Lil' Kim and Biggie.

Lovato found her Halloween inspiration from a singer who came before her and went as Selena Quintanilla.

Zayn Malik's girlfriend, Gigi Hadid, posted this video of him dressed up as Spider-Man.

The Hamilton creator and star dressed as another Broadway character, Evan Hansen.

It's hard to believe that Halloween is already here, but these costumes will make anyone really happy it's that time again. Good luck, Halloween 2018 — this year is going to be tough to beat.