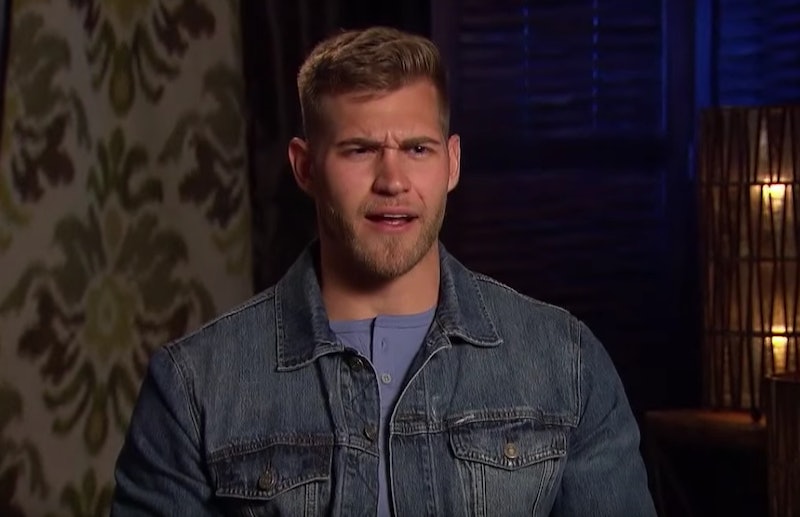 Every week, fans and contestants alike hope Hannah will send home Luke P. And every week, Hannah almost gives the people what they want — until the last second, when Luke is given his 500th chance. Unfortunately, there are a number of clues that Luke makes it to the Fantasy Suites with Hannah, which means we're stuck with him for a while longer. But on the bright side, it seems like things go almost immediately south once they get there.

ABC's mid-season trailer for The Bachelorette focuses on Hannah and Luke's conflict over premarital sex and religion. It's a fight we've started to see playing out with Luke's objection to Hannah being naked during her bungee-jump date with Garrett, but many of the clips in the trailer have not yet aired. First, we see Hannah and Luke making out in what appears to be Greece. Hannah's getting excited about their chemistry — but the fun grinds to a halt as Luke P. tells a producer: "I want to make sure that she's not sleeping around."

Given the subject matter of Luke P.'s next few clips, it seems very likely that he and Hannah are having these conversations on their Fantasy Suite dates. That's when it would make the most sense for Luke P. to be worried that Hannah was having sex with other contestants, and for these two to be discussing sex in general — though honestly, "screaming about" feels like a more fair description than "discussing."

Around the 1:40 mark, the promo shows the two on a date (in outfits we've never seen before). Luke says to Hannah: "Let's talk about sex, and how the marriage bed should be kept pure." Hannah's face, bright seconds earlier, immediately starts to crumble. "And let's say you have had sex with one or multiple of these guys," Luke continues, "I'd be wanting to go home."

Hannah's reaction is immediate: "I cannot believe you just said that! I'm so mad. I don't owe you anything." We then see her storming away, shoving her hand into a camera that follows her. "My husband would never say what you've said to me," she says to Luke, standing in front of a limo — though it's not clear whether the car is for her or for him. In the same outfit from the rest of this date (though it could be earlier or later than the car scene), she adds this: "I have had sex. And honestly, Jesus still loves me."

Once again, Hannah saying in this moment that she has had sex is a strong indication that she's in the midst of Fantasy Suite dates. But then again, she and Luke could be discussing pre-marital sex in general. Either way, it really seems like Luke goes home after this confrontation: again in the same date outfit, Hannah watches the limo drive away, glaring and flipping it off as it goes.

While Hannah made it very clear that what she does with her body is not up to Luke, this promo proves our least-favorite CrossFit enthusiast is struggling with that concept. It's not an issue of religion: in fact, Luke and Hannah bonded early on over their shared faith and the role it plays in their lives. It's about Luke distorting concepts of purity from Christianity as a way to hold Hannah to a higher standard than himself.

While everyone likely hoped that Hannah's final straw with Luke would come earlier, it's good to know she (seems to) send him out with a bang. Oh, and one final thing that's clear from that promo: even if Luke does make it to Fantasy Suites, he'll be spending a very chaste night there when he does. Hannah's other Fantasy Suites, though...those look like fun.