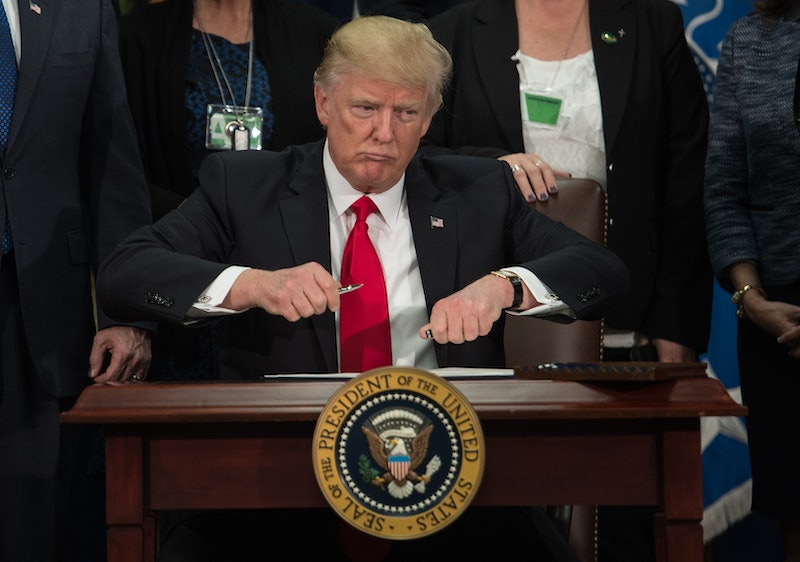 President Donald Trump is entering office with an action-packed week, enacting numerous executive orders almost immediately upon taking office. Though his accelerated pace is not unprecedented compared to the president he is succeeding, the large potential impact of the orders he's signed set this incoming administration up to already be one of the most controversial in modern history.

President Trump's glee at using his pen to change the country is a continuation of an example set by President Obama. The 44th president used unilateral executive power to accomplish several of his policy priorities, most notably creating the Deferred Action for Childhood Arrivals (DACA) program, allowing undocumented immigrants brought to the United States as children to receive work permits, and by extending Title IX sexual nondiscrimination protections to cover transgender people on college campuses.

Republicans often complained about Obama's use of his authority to bypass Congress, going as far as to sue the president over some of his actions, but unsurprisingly (and understandably), many of those same Republicans have been less troubled by Trump's use of the executive order.

Thus far, Trump has not done anything unconstitutional by exercising his power to issue executive orders. However, there are many ways that Trump's executive actions could be stymied by other parts of the government. Here's a list of executive orders that may not actually come into fruition, in order of the difficulty he'll have getting what he wants done.

1. Rolling Back Restrictions On Interrogations

Throughout the campaign, Trump insisted that "torture works," a claim he reiterated in an interview Wednesday with ABC's David Muir. In a yet-to-be-signed order draft obtained by the New York Times, Trump seems poised to undo some of the restrictions of the Obama administration, including the use of secret CIA prisons and interrogation techniques that have been labeled torture by international law, the Obama administration, and the Senate Intelligence Committee.

That opposition could be a major obstacle. The "enhanced interrogation techniques" of the Bush era were seen by many as a black mark on the U.S. intelligence community that few working in it hope to return to. Current law requires interrogation techniques to abide by standards of the U.S. Army Field Manual and the Geneva Conventions. Trump's own CIA director and secretary of Defense were reportedly alarmed by his plans to bring torture back. And Senate Republicans have made clear that they aren't willing to let it slide.

There is further reason to worry that a return to torture would cause U.S. allies to stop sharing intelligence with the United States:

Of course, many of these obstacles were in place when the Bush administration superseded them. But this time around, it will hard for U.S. allies and others watching for it to be misled by the administration like they claim they were before.

2. Building A Wall On The Mexican Border

Trump's executive order to fulfill his signature campaign promise cites the Secure Fence Act of 2006, which gave the government authority to build protections securing the border.

But the biggest obstacle to the Trump administration's plan to build the wall will be cost. Trump's claim that Mexico would pay for the wall remains as far-fetched as ever, with Trump and Mexican President Enrique Pena Nieto entering a diplomatic standoff over it. Experts assess the cost of the wall at somewhere between $15-$25 billion, with hundreds of millions in additional yearly spending to maintain it. Trump could not pay for that just by allocating money from the government's normal budget — the Department of Homeland Security's total discretionary budget for Fiscal Year 2017 is just $40.5 billion. And if Trump wants to pay for enforcement of immigration law (more on that later), he presumably would not be able to cut into it that much just to fund the project.

House Speaker Paul Ryan has so far said he plans on allocating the money through Congress, but that may be easier said than done with so many Republicans in Congress usually opposed to government spending.

Beyond issues of cost, there are bound to be legal issues impeding the wall as well. Legal scholars have suggested that a Supreme Court opinion by the late Justice Antonin Scalia (whom Trump has frequently praised) suggested that executive authority on the Secure Fence Act would be bound by stringent cost-benefit analysis, not to mention the usual requirements of environmental impact assessments and other regulations. And since much of the border land is owned by private citizens, building the wall would require massive amounts of eminent domain seizure by the government, triggering long and heated legal battles.

Among the first things Trump did upon entering the government was sign an executive memorandum calling upon federal agencies to "ease the burden" of Obamacare. It's a little hard to figure out exactly what that means.

Full Obamacare repeal cannot be enacted without Congress, and even then, without 60 votes in the Senate, it will be hard for the full law to be destroyed. Trump's executive order cannot even defund it, though Congress can do it with just 50 Senate votes.

What Trump's executive order can do is lessen the impact of some of the penalties associated with Obamacare. The Affordable Care Act depends on the individual mandate, a tax upon people who do not buy health insurance, encouraging more people to enter the market, spreading the risk around and lowering costs. The memorandum appears to give latitude to federal agencies to give tax waivers easily, allowing more people to avoid buying health insurance without penalty. This could keep healthy people out of the market, causing the pool of people with insurance to be sicker, and therefore more expensive.

There's a possibility that this memo will cause a "death spiral" for the program, with people leaving and costs climbing — or there's the possibility nothing will really happen.

At the same time he ordered the construction of a Mexican border wall, Trump signed an order defunding "sanctuary cities," which have allowed undocumented immigrants to live without fear of immediate deportation. Many constitutional scholars doubt that Trump has the authority to do this, since local law cannot usually be overruled except by explicit federal law, which Trump does not have when he is just ordering it through the executive branch. George Mason University law professor Ilya Somin wrote in the Washington Post, "The order has serious constitutional problems. Unless interpreted very narrowly, it is both unconstitutional and a very dangerous precedent."

Mayors of many of these cities — the big three of New York, Los Angeles, and Chicago, but also smaller cities like Austin and Oklahoma City — have already made it clear that they intend to fight this executive order.

In the same order as the one addressing sanctuary cities, Trump ordered increased law enforcement officers, with a goal of deporting undocumented immigrants. However, just like with the wall, Trump's administration has not yet received funding from Congress to pay for the thousands of new employees that the order calls for.

Trump's order also seeks more aggressive enforcement against immigrants with criminal records. In this respect, it is not wholly dissimilar from the status quo — the Obama administration also prioritized enforcement against criminal immigrants, and deported millions. However, included in this executive order is a call for deportation for any alien accused of a crime, even if not convicted. Though non-citizens do not enjoy the same civil rights as citizens, there are still court rules about ensuring due process, and this could certainly be blocked.

Furthermore, Congressional Republicans have indicated that they want to save the DREAMers — undocumented immigrants brought here as children who are protected by Obama's DACA action and other government laws. So the mass "deportation force" Trump talked about on the campaign may be lessened.

Trump signed orders reinstating construction on the Keystone XL and Dakota Access Pipelines, which were halted by the Obama administration after intense protests. Since the pipelines were already largely approved under Obama, it seems that he can essentially go ahead and get them started again.

But don't count your pipelines before they're built. The #NoDAPL movement has restarted, and will likely meet the construction with even more intense protests than those that led the Obama administration to reevaluate the projects. Though the Trump administration will certainly not be as sympathetic as Obama's was, there is a possibility of delay through civil disobedience.