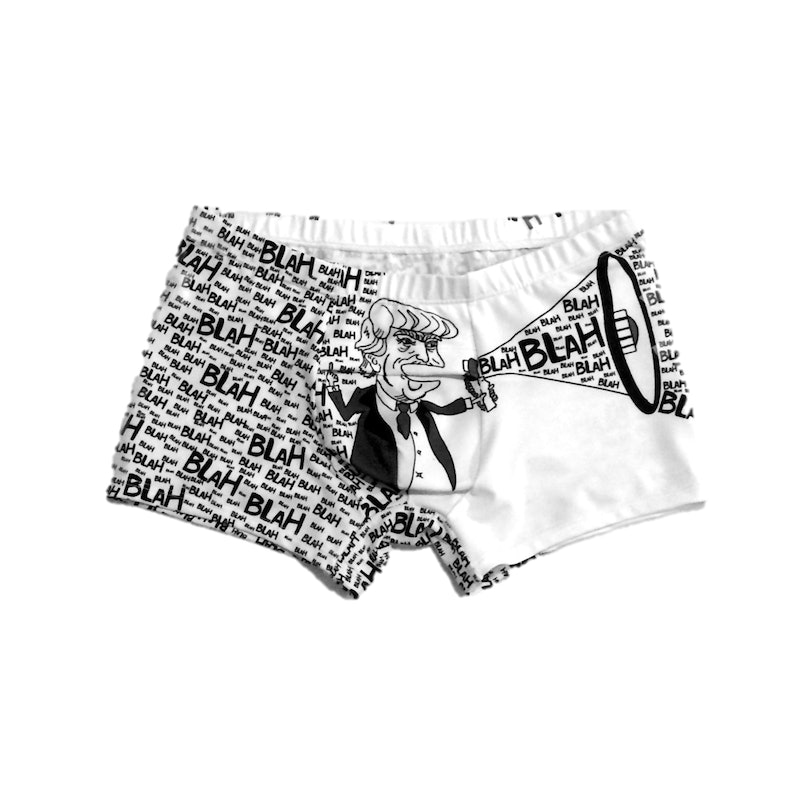 Sometimes, the best way to cope with disappointment and fear is through humor. And that may be the best antidote to the 2016 presidential election for the majority of American voters who did not want to see Donald Trump taking the White House. That humor can take the form of a Saturday Night Live sketch skewering Trump or political cartoons about the president-elect. Or underwear.

The desire for some comic relief fueled Canadian entrepreneurs Matthew Paish and Sarbjit Gill when they designed a pair of Donald Trump-themed underwear for their new company, Undies For Humanity.

The two 24-year-old business partners were already hard at work developing their underwear brand, Fair Undies, which has yet to officially launch, when they witnessed Trump win the election. When they observed the reactions to Trump's victory, the pair saw an opportunity for a novelty design that could hopefully make light of the election results without undermining people's real fears. They shared how the election inspired them to design the pair of underwear in a press statement sent to Bustle:

With our moods mired in the heat of the moment, we wanted to create a pair of underwear that provides much-needed solace and a light-hearted take on a delicate subject. A pair that reflects a many number of people's opinion of the man who will soon be known as Mr President. A pair that gives people the chance to give a voice to the incoming administration and gives us back some power to challenge or support change, whether we wish to shamelessly or underneath our garbs.

Granted, the tone of the statement is all a bit high-minded for underwear. However, it also nods and winks at the silliness of the design, which "features Mr. Trump yelling into the abyss, holding a megaphone in his teeny-tiny hands. 'Blah blah blah blah blah' is written all over to represent his tweets," as Paisch explained to Bustle in an email.

"Trump needs to be held accountable and listen to the diverse communities across the U.S."

The pair of Trump-themed underwear, officially named "The Protest Underwear" was created in conjunction with their Undies For Humanity Kickstarter. All of the pairs of boxers cost $20 through the Kickstarter until Inauguration Day, at which point they'll be available exclusively on the website (for a TBD higher price point), according to Paish.

"We wanted to design something that would give people a moment of lightness after a disappointing election season."

Both Paish and Gill have made pledges to make personal donations to Planned Parenthood, the Southern Poverty Law Center, the NAACP, the Trevor Project, and the Refugee Assistance Program under the pseudonyms of Trump, Mike Pence, and Paul Ryan as the donations roll in, as confirmed by their Kickstarter and Paish's conversation with Bustle.

However, as much laughter as this underwear is supposed to invoke, the founders acknowledge concerns about people potentially misconstruing the humor as a form of normalizing Trump's more offensive behavior. After all, between his proposed ban on Muslims (which he still seems to support, although he has been a bit more vague), stoking anti-immigrant rhetoric in multiple speeches, and growing conflict of interest concerns, it can be hard to laugh at Trump.

While speaking with Bustle over the phone, Paish emphasized that his intention is to walk the difficult line of poking fun at Trump without normalizing him. "Trump needs to be held accountable and listen to the diverse communities across the U.S," he said. Paish added that, in fact, treating Trump seriously hit him and the company on a more personal level. "My partner in this, Sarbjit Gill, emigrated to Canada from India and is part of the LGBT community, so the potential effects of this election have hit him in a personal way. We're hoping our design can point out his absurdity without undermining the situation."

During the process of promoting and work-shopping their underwear, Paish and Gill posted the design in Facebook groups and Reddit threads both for and against Trump in order to get a finger on the pulse. While Paish said the reactions have largely shown people are receptive to the humor, he said some have misconstrued their concept.

"Our feedback has been supportive for the most part. We've had people reach out to us congratulating us on being vocal about what we believe in. Even a few Trump supporters have expressed that they find the underwear funny," he said. However, he noted, "Our biggest negative feedback is that we need to hone our messaging so our tone is clear."

Yet the founders have been making efforts to be cognizant of how their underwear could be misinterpreted and encouraging Trump's uglier behavior. In fact, Paish said they have chosen not to make a women's line of their underwear for that reason. "We did think of doing a women's version, and a different design for women," he admitted. However, he said they decided against it "particularly because we disagree with his statements about sexual assault. It is a sensitive topic."

Paish said they are still deciding whether they want to develop more politically charged designs or stick to the regular undies they'll be releasing through Fair Undies. Either way, according to Paish, the hope is that this pair will give people a moment of escape: "We wanted to design something that would give people a moment of lightness after a disappointing election season."