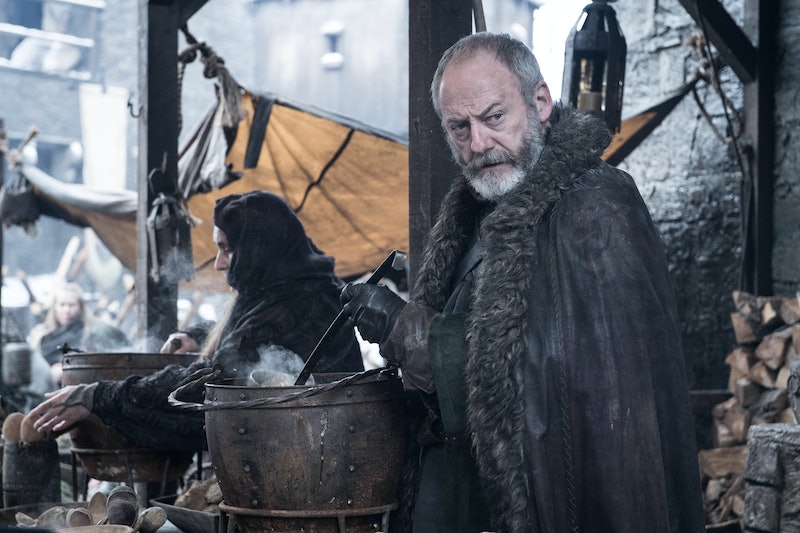 Ser Davos Seaworth may not have been at the forefront of the Battle of Winterfell on Game of Thrones, but Liam Cunningham — the actor behind the character — was part of a heartwarming message to a fan of the show. Some Game of Thrones actors sent a hospice patient messages of comfort and encouragement ahead of the April 28 episode, "The Long Night." As E! News reported, HopeHealth hospice center patient Claire Walton had requested to watch the third episode of Season 8 of Game of Thrones. But her caretakers at the Providence, Rhode Island, facility took this wish one step further by reaching out to stars of the HBO series and getting them to send her well wishes via video. So while the final season of Game of Thrones is sure to have more destruction, these stars are showing the uplifting side of humanity.

Game of Thrones might not be for viewers of all ages with its TV-MA rating, but the 88-year-old Walton was a fan. And according to a post on the HopeHealth Facebook page, she didn't want her health to stand in the way of watching one of the most buzzed-about episodes of the series. After she asked to watch the episode, HopeHealth made this moment even more meaningful by getting 10 Game of Thrones actors to contribute to a video message for her. Among them were Cunningham, Josef Altin (who played the Night's Watch steward Pyp), and Miltos Yerolemou (who played Syrio Forel).

"I hope you're feeling well enough to watch the battle, which is tonight. I wish you the very best," Cunningham said in his message to the fan. As one of the only cast members included in the project still featured on the show, the Davos actor taking the time out from attending Wales Comic Con was particularly kind. Then, there's Altin, who saw his end when the Wildlings attacked Castle Black in Season 4. "Someone said you're a really big fan of Game of Thrones, so I just wanted to make this video and send it to you and just send you my love and well wishes," the actor said. "Enjoy this Sunday — it's going down. Lots of love, darling."

Altin filmed his message at the South Texas Comic Con where Yerolemou also was. Back in Season 1, Yerolemou's character was responsible for training Arya in sword fighting — which came in extremely handy during "The Long Night." The First Sword of Braavos told Walton, "I just wanted to say hello and that you are with us in spirit and that we're thinking of you and sending you all our love. And I hope this message brings a smile to your face."

Syrio Forel taught Arya the saying, "What do we say to the god of death? Not today," which helped inspire her to kill the Night King during the Battle of Winterfell. The HopeHealth spokesperson told E! that Walton was able to watch "The Long Night" before she died at around 5 p.m. on Monday, April 29. And thanks to these kind wishes from the cast members of Game of Thrones, her final viewing experience was all the more special.