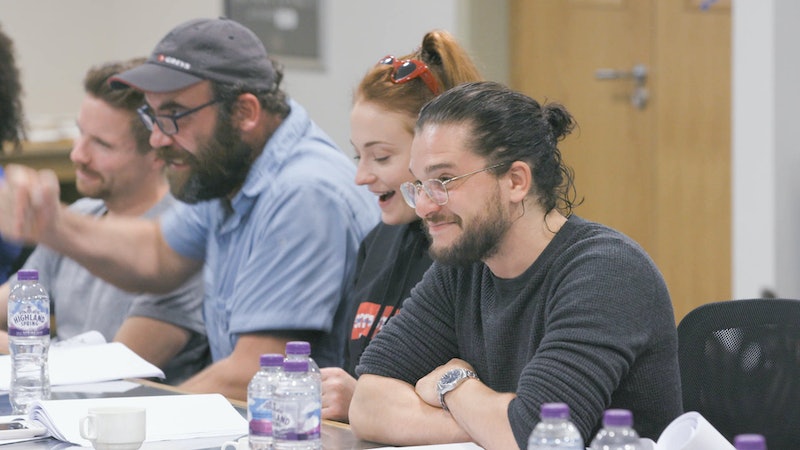 In the series finale of HBO's hit fantasy series, Tyrion Lannister opined that stories are the most important thing in the world — and the best stories let you sink inside them and forget the outside world. But the Game Of Thrones documentary, The Last Watch, which aired on HBO one week after the show wrapped its historic run, shows fans exactly how much real-life magic goes into making that onscreen magic. Of course, dragons and ice zombies and direwolves don't exist in real life — but it can be easy to forget that while watching the drama unfold on your TV screen.

To that end, The Last Watch exists as a reminder of the blood, sweat, and tears that went into making Season 8 — and all of Game Of Thrones over the past decade. No matter what you thought of the show's divisive final season, it wasn't a product that magically arrived on the airwaves fully formed. This was a product crafted by hundreds and hundreds of human beings; actors and writers, yes, but also costume designers and makeup artists and cinematographers and production assistants and extras who volunteer to dress up in Stark armor and shoot battle scenes in the cold winter nights of Belfast, Ireland.

Here are just some of the coolest revelations from The Last Watch that make Game Of Thrones even more magical than it was before:

The final season of Game Of Thrones would require the production team to destroy the fictional city of King's Landing, which for most of the show's run was represented by the real-life city of Dubrovnik, Croatia. Obviously, they weren't allowed to burn down people's actual homes, so the team had to meticulously recreate the entire city. But where to build the capital of Westeros? It was too big to fit inside the Titanic Studios of Belfast, Ireland… so they built the streets of King's Landing on top of the asphalt parking lot behind the studio. Good luck to all those production members who suddenly needed to find street parking!

Some of the cast read all six Season 8 scripts before they arrived at the first official table read; others, like Kit Harington, had chosen to wait until that moment to experience the final scripts for the first time. But whether they knew what was coming or not, it's clear that the actors care as deeply about their characters as the fans do. Watching them react to some of the twists and turns of the final season — like Jorah's death or Varys' execution or Jon's murder of Dany — closely mirror viewers' tear-filled reactions at home.

3. The Beast From The East

Halfway through filming the final season, Westeros found itself faced with the threat of a "beast from the east." No, that's not a reference to Dany's dragons invading from Essos — it's a reference to a very real blizzard that engulfed all of Britain and Ireland, shutting down production for several days. The Starks always warned that winter was coming, but the timing of its arrival didn't prove very efficacious for the team behind-the-scenes.

While the moment Arya killed the Night King was unexpected and thrilling, some fans have wondered where exactly Arya came from. Was she hiding in the trees? Did she wear the face of a White Walker to get close enough to the Night King to make her strike? During the table read of the scene in question, the stage directions reveal the answer: although it wasn't shown onscreen, the script makes it clear that Arya simply took a running leap off a pile of dead wights. Even if we still don't know the identity of Azor Ahai, at least that's one mystery solved!

Another thing fans were wondering about was whether the white substance covering King's Landing in the finale was snow or ash. There's a scene in The Last Watch of the team's snow guy spreading fake flakes around the Dragonpit set in Spain, which certainly implies that it's snow, not ash. Or maybe it's snow and ash — ice and fire?

When it came to the show's climactic scene — the Great Council in the Dragonpit to decide the fates of Tyrion Lannister and Jon Snow and elect a new king of the Seven (Six) Kingdoms — the production team brought in a couple of ringers to throw spoiler-seekers of the scent. Faye Marsay, who played The Waif in Seasons 5 and 6, was brought in to set to fuel the fire of the fan theory that Arya had actually been killed by The Waif at the end of Season 6, who had been masquerading as the Stark girl ever since. Other cast members flown to Spain to obfuscate the truth included Tom Wlaschiha (Jaqen H'ghar), Vladimir Furdik (the Night King), and Kit Harington.

Some fans wondered at the motivation of Jon's Northern soldiers, who joined on the rape and pillage of King's Landing when Dany went Mad Queen, sacking the city alongside Daenerys' Unsullied and Dothraki. At least one extra has a theory: getting into character as a Stark soldier for the bloody sequence, he described the soldiers' actions as long-awaited vengeance for the Red Wedding. The North remembers, indeed. All these years later, they're still holding the Southerners accountable for the brutal murder of Robb Stark, the Young Wolf, the King in the North.

It's no secret that films and TV shows aren't usually shot in strict chronological order; due to the demands of production, scenes are shot out of order and later stitched into sequence in the editing bay. And yet, it still feels odd to find out that Emilia Clarke's last day on set wasn't her death scene; Kit Harington's last day wasn't riding off into the North with the wildlings. Clarke's last scene isn't totally clear, but it involved Dany and Jon outside, with the Mother of Dragons wearing her striking white winter coat. The last scene Harington shot was Jon's confrontation with Grey Worm on the streets of King's Landing as the Unsullied executed Lannister captives. An oddly low-key ending to a decade's worth of work.

And now our watch is ended…