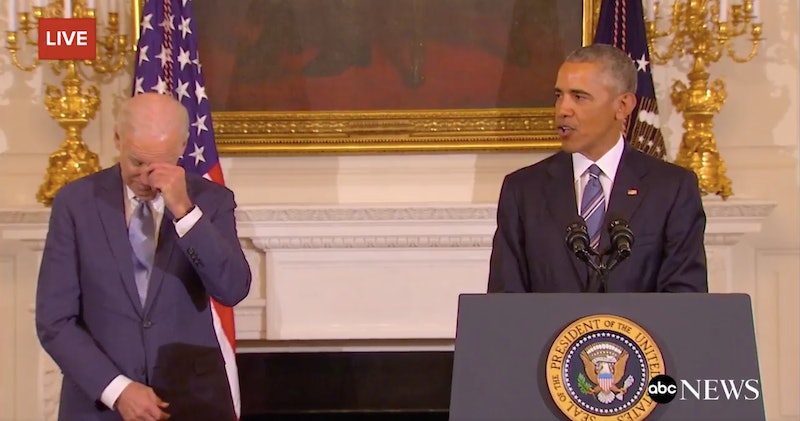 As if the bromance between the President and Vice President wasn't already endearing enough, on Thursday, Barack Obama showed his love and respect for his right hand man when he awarded Joe Biden with a Presidential Medal of Freedom. Biden couldn't hold back his emotions after receiving the medal from his friend, and in a touching moment turned his back to wipe tears from his eyes.

Obama surprised Biden with the gesture during a private farewell when he brought Biden into a room full of friends, family, and colleagues. The medal is the highest civilian honor. Other Presidential Medal of Freedom recipients during Obama's presidency include Grace Hopper, Diana Ross, Frank Gehry, Alvin Ailey, Madeleine Albright, and Barbara Streisand. With more than 100 given away, Obama has awarded more Medals of Freedom than any other president. Obama spoke of Biden's longtime public service, and called him "the finest vice president." He said,

For your faith in your fellow Americans, for your love of country and for your lifetime of service that will endure through the generations, I'd like to ask the military aide to join us on stage. For my final time as president, I am pleased to award our nation's highest civilian honor, the Presidential Medal of Freedom.

It was a touching tribute to a friend and coworker. And just as touching was Biden's reaction to being honored by the man he worked with for so long.

When He Learned What Was Happening

When he heard that Obama was giving him the medal, he couldn't hold back his tears, and had to step back for a moment.

You can see how grateful and honored Biden is to be receiving the award.

Biden accepted the medal, though he said, "I don't deserve this, but it came from the president's heart."

You can just tell how much the award meant to Biden, and he took to the podium to say to Obama that he'd never met anyone with the "integrity and the decency and the sense of other people's needs like you do."

Fittingly, Obama addressed the nation's obsession with the pair. Before concluding the conference, Obama said, "This also gives the internet one last chance to talk about our bromance."

In a week of very sad goodbyes from the current administration, this one definitely hurt a lot. We'll certainly miss this dynamic duo, and look forward to their reunions in the future.