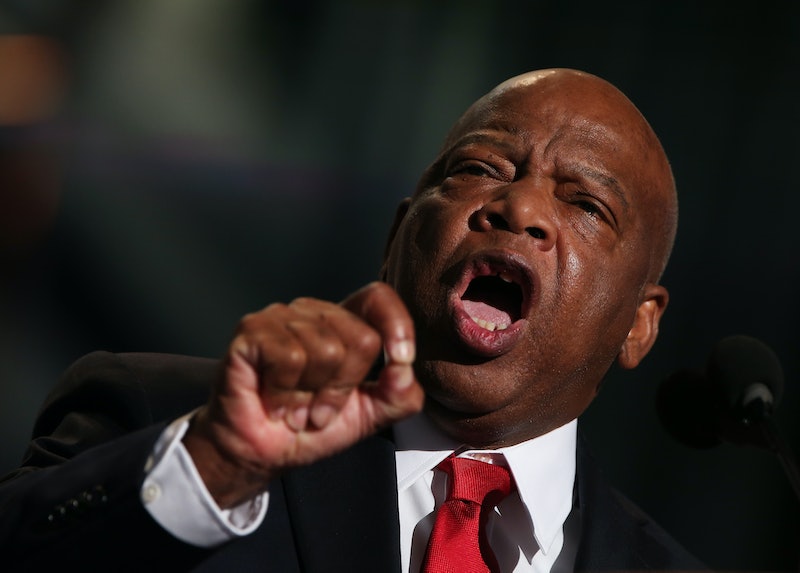 President-elect Donald Trump began his Martin Luther King holiday weekend by attacking John Lewis, a prominent civil rights leader who now serves in the House of Representatives. Trump called Lewis all talk and no action in a series of tweets published Saturday. While the list of Lewis' accomplishments is proof he's hardly all talk and no action, an examination of some of Lewis' best quotes prove he's a powerful change-maker.

Although Trump's not known for letting criticisms of him pass without comment, his latest rebuke has sparked fresh outrage given its timing and target. "Congressman John Lewis should spend more time on fixing and helping his district, which is in horrible shape and falling apart (not to mention crime infested) rather than falsely complaining about the election results," Trump tweeted. "All talk, talk, talk - no action or results. Sad!"

Trump's tweets followed Lewis' public questioning of the president-elect's legitimacy. "I don't see this president-elect as a legitimate president," Lewis said earlier in the week during an interview regarding his decision to boycott Trump's upcoming inauguration on NBC's Meet The Press. The congressman said he believed Russia had helped Trump win the election.

While Trump may want to redefine Lewis' legacy as "all talk, talk, talk – no action or results," history paints a different picture of the civil rights activist and politician. From his role in the 1965 Selma March, an event widely considered to have been a major turning point in America's civil right movement and a catalyst for the passage of the Voting Rights Act of 1965, to his leadership of the Student Nonviolent Coordinating Committees (SNCC), which helped African Americans register to vote, to his work representing Georgia's fifth district in the House of Representatives, Lewis has directly inspired a significant amount of change in this country.

Here are eight quotes from Lewis that prove his "talk" is powerful:

We Have An Obligation To Do Something

"We have a right to protest for what is right," Lewis told House Democrats while he led them in a sit-in demanding a vote on gun control measures in June 2016. "That's all we can do. There are people hurting, there are people suffering, so we have an obligation, a mandate, to do something.

Focus On Our Similarities, Not Our Differences

"Once people begin to see the similarities between themselves and others, instead of focusing on differences, they come to recognize that equality is essentially a matter of human rights and human dignity," Lewis said in a statement following President Barack Obama's decision to endorse same-sex marriage equality.

Get In Good Trouble

"History will not be kind to us," Lewis told Lawrence University's 2015 graduating class. "So you have a moral obligation, a mission and a mandate, to speak up, speak out and get in good trouble," Lewis said. "You can do it. You must do it. Not just for yourselves but for generations yet unborn."

Have The Courage To Speak Up

"You cannot be afraid to speak up and speak out for what you believe. You have to have courage, raw courage," Lewis said in a tweet published July 16, 2014.

Do What Your Spirit Tells You To Do

"Sometimes you just have to do what your spirit says do," Lewis said in an 2013 interview with In These Times about his decision to join the Selma March in 1965.

Despite Our Various Backgrounds, We're In This Together

"Maybe our forefathers all came to this land in different ships, but we're all in the same boat now," Lewis told House Democrats while he led them in a sit-in demanding a vote on gun control measures in June 2016.

Equal Justice Cannot Be Reserved For Only Some Citizens

"You cannot protect equality for one group and allow unequal treatment of another," Lewis said following the 2013 Supreme Court ruling stating the Defense of Marriage Act (DOMA) was a violation of the Constitution. "If we are a society committed to the concept of equal justice under the law for every individual, then it must apply for every citizen, and cannot be reserved for some citizens."

If Not Us, Then Who?

"If not us, then who? If not now, then when?" One of Lewis' most famous questions has been serving as inspiration for continuing the push toward equality for decades.

These are just a sample of some of John Lewis' most powerful quotes that show that yes, Donald Trump, sometimes "talk" can lead to incredible change.