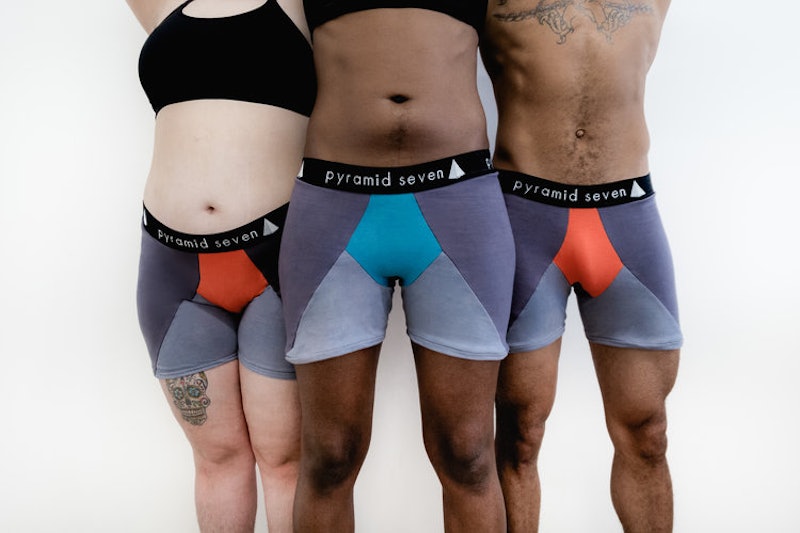 Periods are annoying (read: agonizing and miserable) enough on their own, but when your underwear literally can't support a pad, it's a whole new level of inconvenient. The folks over at Pyramid Seven understand the menstrual struggle, which is why they designed a line of period-friendly boxers for transgender men. Although cisgender women might not think about it, lady underwear is designed to hold period products — or maybe period products are designed to fit lady underwear. Either way, feminine underwear is capable of holding panty liners and pads without much hassle, but that isn't true of masculine underwear.

Enter Pyramid Seven, a Chicago-based boxer brief company. Its offerings are designed for anyone who menstruates, no matter how they identify. "After noticing there was a lack of conversation around people with periods who didn't normally wear feminine underwear, we decided to do something about it," explains the company website. One year later, Zipporah Jarmon and Michelle Janayea have released their first collection of genderless boxer briefs.

So what does that entail? On top of being ever so fashionable, Pyramid Seven's boxer briefs are made with an extra panel on the gusset, making it easier to attach menstrual products.

According to its website, the underwear are made and dyed by hand, and the fabric is chosen for "breathability, comfort, and flexibility." A single pair costs $26, and a pack of three goes for $66. (If you're interested, you can head over to Pyramid Seven's website.)

Jarmon told Mashable that the company's products are meant to help fill the "need for products that cater to all bodies," adding that they have personally experienced the frustration of being forced to wear feminine underwear while menstruating.

Pyramid Seven isn't the only company to cast away the gender binary during the design process. Thinx, the company that popularized "period panties" with built-in absorbent material, is a popular option for anyone who menstruates, including transgender and genderqueer people. Last year, it even featured transgender male model Sawyer DeVuyst in an ad campaign. There are a growing number of lingerie and underwear companies meant specifically for transgender men and women as well.

Meanwhile, Pyramid Seven's products have entirely sold out. (Jarmon told Mashable that more are being manufactured currently, and the company plans to eventually ship worldwide.) Clearly, there's a demand for trans-friendly underwear — all that's left is for manufacturers to meet it.

More like this
An Honest Review of MeUndies Boxers, According To A Non-Binary Person
By Megan Lasher
The 19 Best Tweets & Memes About Bisexual Awareness Week
By Lexi Inks
You've Probably Never Heard Of These Strange Products That Make Life SO Much Better
By Maria Sabella
I'm A Shopping Editor & I'm Obsessed With These Cheap Products With Near-Perfect Amazon Reviews
By Rebecca Martinson
Get Even More From Bustle — Sign Up For The Newsletter