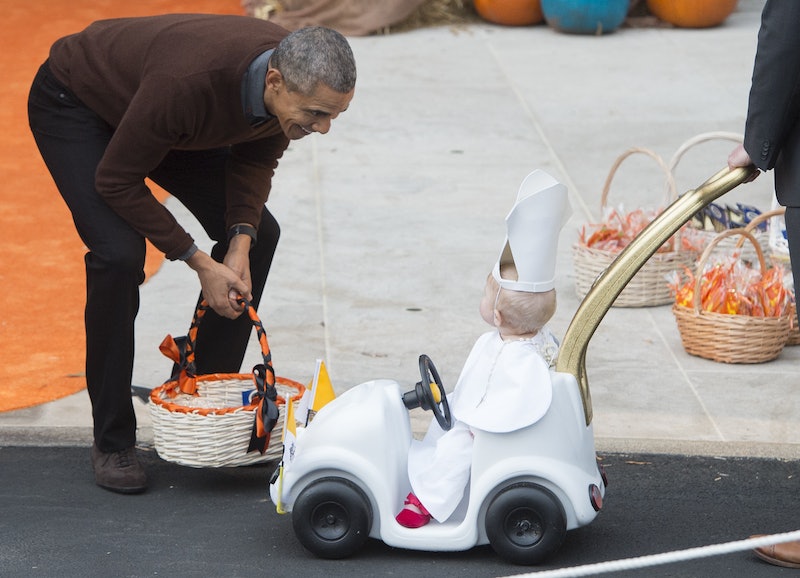 Over the past eight years, President Barack Obama has given us countless adorable (and meme-able) moments. From the time a young Black boy asked if he could touch the president's hair to the time he let a tiny Spiderman vanquish him, it seems that Obama has a particular penchant for cute photo ops with kids. But these photos of Obama meeting a baby dressed like the Pope in 2015 might just be his most genuinely adorable moment with a young constituent.

This adorable encounter came during Obama's second-to-last Halloween at the White House, when he and Michelle hosted a trick-or-treat party on the White House lawn. Though there were dozens of cute kids in interesting costumes that their parents likely spent hours and hundreds of dollars making, it was the "Lil' Pope" and his parent-powered popemobile that most delighted the president. In fact, he loved the little papa so much, he awarded him the "top prize" for having the best costume. Just think — one day, that little guy will not only get to say that he was pushed around the south lawn of the White House in a tiny popemobile, but that the president himself deemed his costume the best, all before this baby Pope was potty trained.

President Obama's meeting with the Lil' Pope is just one of many moments where Americans were treated to a softer side of the commander-in-chief. That same Halloween, Obama was photographed lying on his back on the floor of the Oval Office while holding the baby daughter of a deputy security chief who was adorably-clad in a fluffy elephant costume, which joins the many amazing photos of the president goofing off with kids throughout his two terms. While presidents are often subject to being negatively defined by their personal lives, Obama has proven himself to be a loyal family man who seems to be an excellent father who genuinely loves and cherishes his wife.

While the entire country (and the president himself) muse on the legacy of the Obama administration following his farewell address, one thing won't be lost to the annals of history or of the political pendulum — that for all the power he held, for all the mistakes he made and all the good he did, Barack Obama remained the affable, charismatic man that so many of us supported in 2008 and 2012. With the dark cloud hovering over the incoming administration, that might just act as a retroactive silver lining.