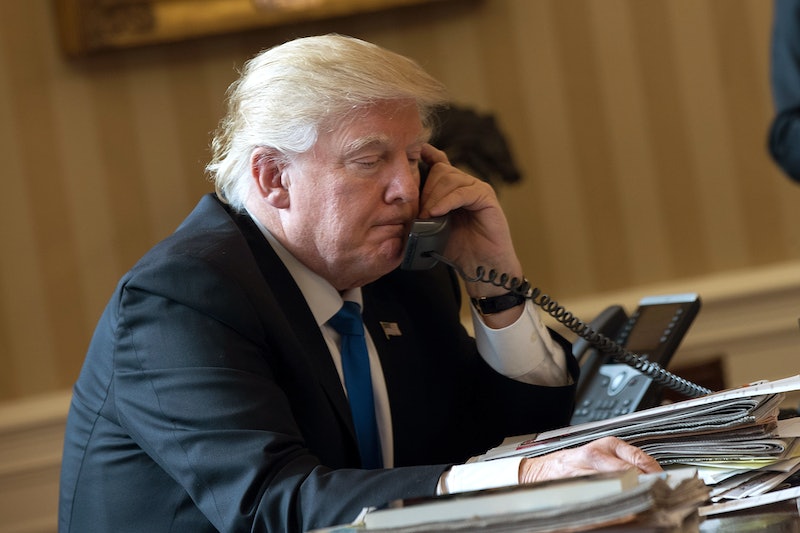 In the immortal words of Justin Timberlake, "What goes around comes back around." Dozens of private White House phone numbers were leaked online on Tuesday by a group of anonymous hackers, definitively proving that karma exists and it's coming after Donald Trump. Somewhere, underneath the 19 layers of irony, there's a national security threat to be concerned about, but for the moment it's OK to just revel in the ways life plays itself out.

The anonymous group, not to be confused with the hacking group Anonymous, posted the numbers on a website ironically titled White House Comment Line. Trump infamously shut down the public comment line last week as one of his first acts as president, though administration officials told The Los Angeles Times that there are vague plans to reinstate it at some point in the future. “We’re still learning how to work our computers,” a member of the White House communications staff said, totally reassuring the American public.

As of 3 p.m. ET on Tuesday, most of the phone lines had been shut off, though Gothamist reported that one number had redirected to a voicemail belonging to a "Conway, Kellyanne." That's the only current indication of the stature of the phone numbers' owners, and while it's pretty hilarious that hackers just put Trump's senior staff on blast like that, it's also a pretty troubling national security issue. These numbers aren't really supposed to be publicly available, and this alone could have sent the White House into complete chaos for the day. It's funny because it happened to Trump, but realistically, this is a pretty big hole in the federal government's cyber security that should probably get fixed ASAP.

If you do happen to reach someone by calling one of these numbers, ask them to speak with you briefly and politely regarding your concerns about the Trump administration. The spokesperson from the anonymous group behind the leak told Gothamist that people should talk to anyone who answers the same way they would talk to a Congressional representative. "[C]almly share your views with the White House. You have the right to be heard," the spokesperson said.

If it helps, write out a script first in case you get anxious on the phone. Although most of the numbers were entirely disconnected Tuesday afternoon, it can't hurt to give them a try over the next few days when you've free time. Any possible way to make yourself heard by this administration that keeps turning its back on the people is worth a shot.