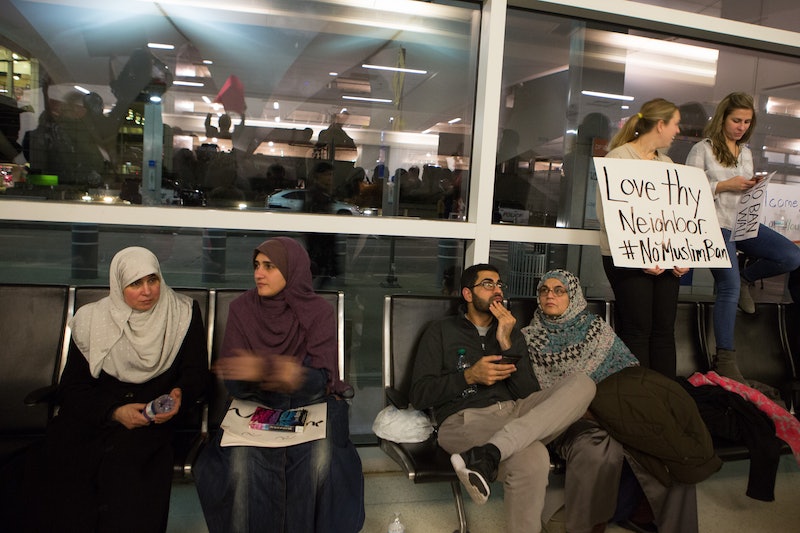 On Friday, President Donald Trump issued an executive order that temporarily banned all refugees from seven predominately Muslim countries — Iran, Iraq, Libya, Somalia, Sudan, Syria and Yemen — from entering America for 90 days. While this measure may not be permanent, it's completely devastating, and goes against the foundation of America, a country founded by refugees and immigrants. Like many people, you might feel lost and alone with seemingly no response to this news. Yet there are ways to take action, from the big (calling representatives, protesting, and donating to organizations like the ACLU) to the small (sharing pro-refugee memes and images on social media).

Sharing a funny or touching image may not shake President Trump to his core, but it is a way to spread your beliefs and make your voice heard during these trying times. Art can be a powerful way to handle injustice, and this generation has provided countless outlets for sharing one's thoughts and ideas about political topics. Here are some suggestions of memes and images you can share on social media to show your support of an equal America for all Americans — even those who haven't made it into the country yet.

1. This Point About Muslim-American Soldiers

2. This Moving Statue Of Liberty Image

"Give me your tired, your poor, your huddled masses yearning to breathe free.”

If you ever feel alone in your despair, just take a look at this huge crowd in protest and you'll cheer right up.

A Washington Post article from 2015 serves as a reminder that Anne Frank's family attempted to get into the U.S. but were denied entry. All but Frank's father, Otto, perished in concentration camps. And now, this silent couple at the Philadelphia International don't need to speak the words "never again" for their meaning to be clear.

As much as things change, they also seem to stay the same.

6. This Display Of The Cold, Hard Facts

Huh. What an awfully interesting choice of "dangerous" nations by our president.

7. This Comparison Of Pro-Life & Pro-Immigrant

In September 2015, three-year-old Aylan Kurdi became the face of the refugee crisis when his dead body was photographed washed up on a Turkish shore. Kurdi's family was attempting to escape from war-torn Syria when their boat capsized and the infant (as well as his mother and young brother) passed away. This image discussing what it truly means to be "pro-life" is jarring but important.

8. These Statistics About Real Dangers To American Lives

I think these numbers speak for themselves.

9. This Crucial Reminder About Young Refugees

Seeing so many babies and children forced to seek refuge with their families is heartbreaking.

When does the learning-from-previous-mistakes part happen? Anybody have an idea on that time frame?

12. This Play On A Popular Quote

This comes from a famous quote by Martin Niemöller, which starts, "First they came for the Socialists and I did not speak out — because I was not a Socialist" and ends with "They they came for me — and there was no one left to speak for me." This poster is a hilarious and outspoken play on that famous passage.

13. This Muslim Teen Who Brought Pizza To Protestors

What a sweet, inspiring sight.

Keep on fighting the good fight.