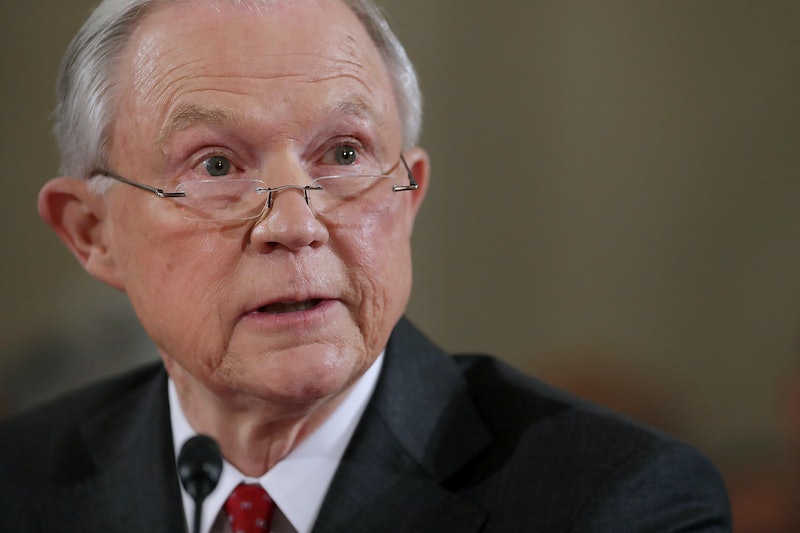 On Tuesday, the Senate Judiciary Committee heard testimony in the confirmation hearing of Sen. Jeff Sessions, who is nominated for attorney general in Donald Trump's incoming cabinet. The senator was grilled for hours on his past as a prosecutor and a legislator. The most striking part of Tuesday's testimony was the clear divide that emerged between Session's personal beliefs and U.S. law.

While Sessions has come under fire for his religious beliefs and past claims of racial insensitivity, he attempted to make clear in the hearing that his role as attorney general would be to uphold the laws, not to influence them. Sessions has spent two decades as a Senator, where his role as a legislator is to make the laws of the country. Legislators tend to vote for laws that reflect their beliefs. The role of attorney general, however, is very different.

As a member of the executive branch of government, Sessions' role would be of law enforcer, not law creator. Sessions conceded many times in his confirmation hearing that his personal beliefs, like his pro-life stance and his religious resistance to same-sex marriage, do not align with the laws on record in our country. But he continued to state that as attorney general, he would put his personal beliefs aside in order to uphold and enforce the laws.

These five quotes from Sessions' hearing show how he'll try to govern fairly while maintaining what some think are controversial personal beliefs.

"It is a violation of the law to excessively, or improperly, hinder the access to abortion."

Sessions doesn't mince words when it comes to his views on abortion. When probed on Roe v. Wade by Sen. Dianne Fienstein, Sessions said that he believes the ruling "violated the Constitution." But on the many occasions that abortion rights were raised by members of the committee, Sessions continually said that Roe v. Wade is the "law of the land," and that he would "enforce the laws that make clear that a person who wants to receive a lawful abortion cannot be blocked."

"It was 5-4, and the majority of the court set a definition of marriage for the entire United States of America, and I will follow that."

Sessions has fought against expanding LGBT anti-discrimination protections in the past, and is not in favor of same sex marriage, but again said that the Supreme Court has spoken, and that he would uphold the ruling that authorized same-sex marriage nationwide in 2015.

"Fundamentally, we need to fix this immigration system."

Democrats pushed Sessions to find out whether he would uphold DACA, President Obama's executive action which allows children who were brought into the U.S. illegally to remain in the country. Sessions would not say what would happen to the 800,000 young people affected by DACA, but said that he would be not be opposed to rolling back Obama's executive actions on immigration, and has a reputation of supporting hard-line immigration policies.

Over the past few years, the country has largely changed its stance on marijuana, and the drug is legal recreationally in a few states and as a medical treatment in many more. Sessions is strongly opposed to all drug use, and has been quoted as saying, "good people don’t smoke marijuana." The Department of Justice under attorneys general Eric Holder and Loretta Lynch has not prosecuted individuals who use marijuana in a state where it is legal. When asked whether he would intervene in these cases, since the federal law still prohibits marijuana use, Sessions would not rule it out, but said that action by the federal government is impeded by a lack of resources.

"If I am so fortunate as to be confirmed as attorney general, [police] can be assured that they will have my support."

In his opening statement, Sessions spoke about how law enforcement officers feel "abandoned" by their country, and that they need to feel supported to effectively do their jobs and keep our communities safe. This is a particularly charged issue, and over the past few years, the federal government has attempted to hold police accountable for their actions, in an attempt to erode distrust in the police. Sessions is tough on crime, and some of the provisions installed to make policing more transparent, like body camera initiatives, could be repealed by an Attorney General Sessions.