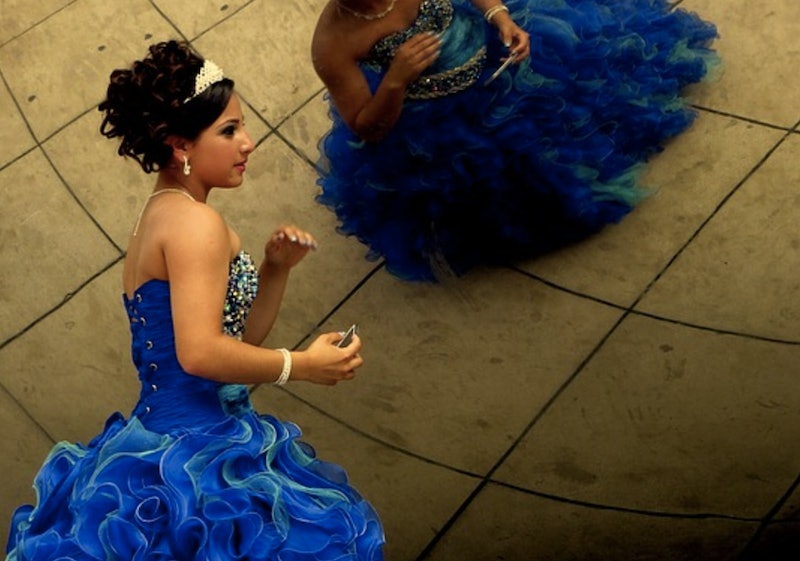 On Wednesday, people outside the Texas capitol building in Austin witnessed a particularly colorful — and sparkly! — demonstration. Fifteen Texas teens wore their quinceañera dresses to protest Senate Bill 4 (SB 4), the state’s recently passed immigration law. Wearing the brightly colored, voluminous dresses typical of quinceañeras, the young Latina women celebrated their heritage and protested a law that they allege is discriminatory.

Texas Governor Greg Abbot signed SB 4 in May. The law, which will go into effect in September, bans sanctuary cities in the state; once in effect, police chiefs and sheriffs will not be allowed to prevent their officers from asking people about their immigration status if they’ve been arrested or lawfully detained (that includes being pulled over for routine traffic violations). Under SB 4, appointed or elected state officials can be removed from office if they don’t cooperate with federal immigration officers. Critics of the law argue that SB 4 is unconstitutional and that it unfairly targets Latino people. A number of cities, including Houston, Austin, and San Antonio, have filed a lawsuit to have SB 4 struck down.

At Wednesday’s quinceañera-themed protest, the 15 young women, wearing tiaras and sashes printed with messages like “equality” and “sin racismo,” performed choreographed dances (traditional at quinceañeras) on the steps of the capitol, to songs including “Somos Mas Americanos” and “Immigrants (We Get the Job Done).”

They also gave handmade paper flowers to legislators who voted against SB 4 and handed out flyers to those who supported the law. Those flyers featured the poem “The New Colossus,” engraved inside the pedestal of the Statue of Liberty: “Give me your tired, your poor,/ Your huddled masses yearning to breathe free….”

“I want every Latino here to know that we are an 11 million, 40 percent, of the population here in Texas,” 16-year-old Viridiana Sanchez told the Austin American Statesman. “And if these politicos think we are going to go back down to where we came from, we’re not, because our ancestors have worked way too hard for us to be where we are.”

Magdalena Juarez, 17, told BuzzFeed News that she protested SB 4 because “[i]t discriminates against people for being brown… It’s hard because a lot of the people are going to be affected; a lot of us are going to be suffering.”

Emelyn Macias, 16, told BuzzFeed News that she protested because others can’t. “The reason I speak up is I see that many people are scared to talk about certain topics like this. They are intimidated by the fact that, 'Oh, what if I’m asked for papers?' They’re afraid to speak up for their rights.”

The protest, dubbed “Quinceañeras at the Capitol,” was created by Jolt, a Latino activism organization. Before the protest, Jolt communications director Tania Mejia explained the idea behind the event to Remezcla: “We thought that this event would be a great way to show people that this is our home, celebrate our culture, and send the message that young Latinas are standing up to the ongoing attacks on our community by our elected officials who work at the Capitol.”

SB 4 is set to go into effect September 1.