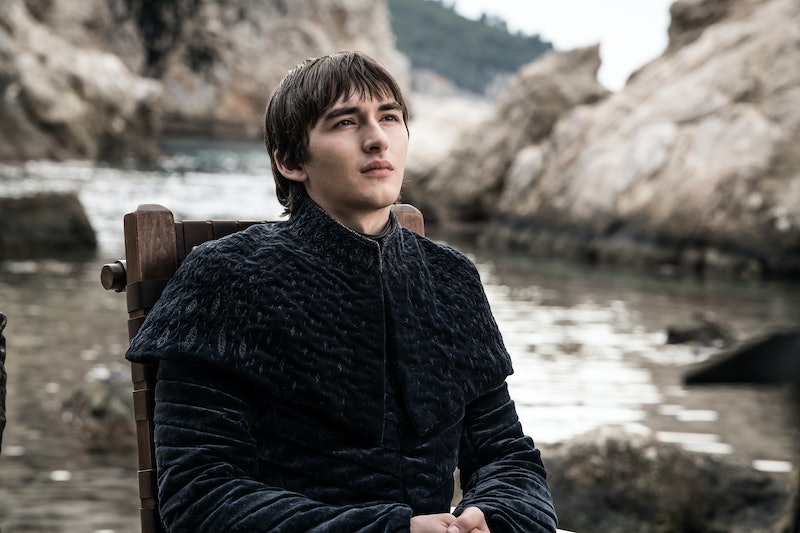 Spoilers for the Game of Thrones series finale ahead.

Whether you liked the ending or not, Brandon Stark is the new king of Westeros (minus the North) and there's nothing you can do about it. You might want to scream, or call foul, but it is what it is. And the Three-Eyed Raven seems ecstatic about the outcome, at least as ecstatic as he can be. And with this massive reveal, the Internet has responded with tweets and memes about Bran becoming King of Westeros, and they're hilarious. Hilariously upset that Bran's king, actually.

But it seems like there's one person who thought it was a good end, and it's no surprise that that's Bran himself, actor Isaac Hempstead Wright. Speaking with Entertainment Weekly, he said that though he wished he had gotten in a cool death scene he does think Bran will be a good king. That said, he doesn't expect fans to be happy about this turn of events. “Not everyone will be happy,” he said. “It’s so difficult to finish a series as popular as this without pissing some people off. I don’t think anybody will think it’s predictable and that’s as much as you can hope for. People are going to be angry.”

While he's right, not everyone will be happy, there's a difference between having an ending that makes sense and satisfies most and an ending that a majority of fans virtually everyone is pissed at. If the ending had made sense and all the signs and prophesies pointed to this moment, it would be acceptable even if Bran wasn't a favorite of yours. This isn't that. But alas, it's the ending we all got, so enjoy some amazing memes and commentary from the Twitter community to ease the post-GoT stress.

Leslie Jones' commentary on Game of Thrones has been something to look forward to week to week. And for the last episode ever, she did not disappoint, pointing out here that Bran's title, Bran the Broken, was "bullsh*t." Not only is it ableist language, it's also completely unnecessary. Why does that have to be his title? Broken from what?

Kacey Musgraves' reaction at the 2019 Grammys has turned into a meme perfect for every occasion, and this is no different. Bran, as the Three Eyed Raven, might have known all along — or at least for a few seasons now — that he was going to end up as king of Westeros' six kingdoms. He didn't act fake-surprised — instead he didn't really have much expression, per usual — but if he could show feelings, it might have looked like this.

Hmmm, Bran's statement does seem eerily familiar? Does he sound like anyone?

4. It's What He's Been Waiting For

Again, Bran could have known this was the outcome, or he might have sensed it could possibly go this way. He didn't seem too upset about it, though.

5. Sansa Was Right There

While Sansa has had Winterfell as her top priority, and was more than happy to establish it as an independent region and become its queen, you can tell she wasn't ecstatic about Bran being proposed as king. Plus she was right there while Tyrion was going on about who was best fit to rule. How could he gloss over her like that?

On that note, Tyrion said that Bran having the best story meant he should be king. However Arya Stark and Sansa Stark — Tyrion's ex-wife, who he knows very well — would beg to differ. Arya's arc and training has made her out to be one of the best, most successful characters on the show (see: the Night King), and Sansa went from being a naive, starry-eyed girl to having major political knowledge and strategy. Bran... hasn't done nearly as much.

Bran turned down being Warden of The North or any other type of leadership position because he was the Three-Eyed Raven. But when the kingdom comes knocking, he just puts that aside to take the crown.

8. Out Of Left Field

Again, Bran must have been king or bust this whole time.

Was Bran turning down the other roles of power to ensure his spot as king? He didn't need to, since he could have to assumed the king title on top of any of others he might have been given, so who knows. Maybe he was trying to throw everyone off. It definitely worked.

As this tweet points out, Tyrion insisting that Bran has the best story and should therefore sit on the throne is utter BS and that's the problem. This whole season has been accused of using sexist tropes and misogynistic writing, so it's no wonder this is the ending fans get.

Want more proof that Sansa and Arya are more deserving than Bran? Look no further than these here receipts.

Sansa was obviously a close runner-up on the throne after Daenerys and Jon, with Bran nowhere in sight. Bran was elected by a small group (Tyrion and the council), but he wasn't the people's choice. And he definitely wasn't the audience's choice either.

It may have been a little TMI, but Sansa had a point if they were going to go the traditional route of familial succession.

14. Another Man Fails Up

As this tweet pointed out, fans should have known something crazy, unfitting, and borderline sexist would come of the ending. It's a mediocre finish to a rather lackluster season (to say the most).

Some people who have been with Game of Thrones since the very beginning are feeling robbed by an underwhelming series finale. Just know you're not alone.

Again, assuming he knew this was going to happen, he just let millions die and people he "loved" suffer because he wanted his king endgame.

Poor Meera. Because she believed Bran was essential in defeating the White Walkers (lol) she and her brother Jojen did all they could to keep him safe, with Jojen even sacrificing his life. And she was visibly upset when Bran didn't say so much as "boo" to her when she headed home. The audacity.

Again, it's been a long road and while not everyone will be satisfied with the way a beloved show ends, it should make sense and feel like fans spent their time wisely with the show. Not like this.

There were so many other better, viable options when it came to the Iron Throne and who would rule Westeros. Bran was not one of them.

20. What Could Have Been

This tweet pointed out that even if King Bran was the endgame all along, it could (and should) have been done differently. Having Jon publicly acknowledge his Targaryen blood — which no one knows other than a handful of main characters — would have made him being Aegon Targaryen II actually mean something.

It might always feel wrong, or unearned, but Bran is the king now. And personally victimized fans can take a note out of Drogon's book and just peace out now.

So, go forth and mourn Game Of Thrones for the infuriating, fantastic, complex, and frustrating show that it was.