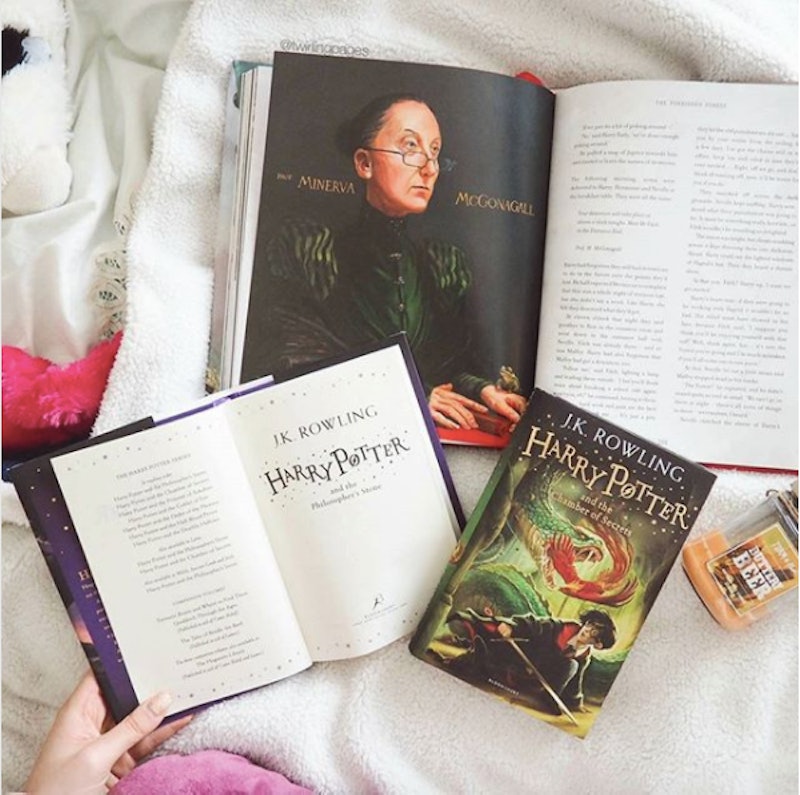 Attention all Potterheads: There is a new batch of Potter-related art out for your viewing pleasure! These unreleased Harry Potter covers by Olly Moss are full of magic and mystery, and the fact that we can still be impressed, after all this time, always, by the allure of the Potter franchise, is proof of just how powerful the magic of J.K. Rowling's wizarding world is.

Harry Potter fans will recognize Olly Moss' work, even if they don't know his name. Pottermore frequently features Moss' art as buyable prints and posters. The Winchester, U.K.-based artist created the 2015 Harry Potter covers, which were later used when the audiobook editions appeared on Audible for the first time. Moss also redesigned the cover of Fantastic Beasts and Where to Find Them for a new, updated edition, published in March 2017.

In a Thursday tweet, Moss revealed that he developed five different treatments for the Harry Potter book covers, only two of which have appeared in the real world so far. The "Optical Illusions" set became the 2015 Harry Potter covers. "Hogwarts" appeared in the Pottermore shop, and was also used as the cover art for the German Harry Potter audiobook editions.

The three other sets of unreleased Harry Potter covers — "Heraldry," "Silhouettes," and "Illustrated" — are just as gorgeous as the ones you have already seen. As a kid who grew up reading old library books in a rural county, the "Illustrated" set holds the most magic for me. I can just imagine running my hands over that buckram binding, taking in every inch of the illustration on the cover before cracking the spine and diving into Harry Potter all over again.

Unfortunately, plans to bring out Moss' unreleased cover art in a collectible format — books, posters, prints, etc. — do not appear to be in place at this time, so if you have fallen in love with one of those three sets, you're in for some anguish. (But if you start a petition to get Moss' recently revealed cover illustrations released in the Pottermore shop, send it my way.)

These unreleased Harry Potter covers by Olly Moss are absolutely stunning, and you can check out all of them by clicking on the tweet above. Be sure you have some time to kill, though. Since we both know how good Moss is at hiding little clues in his work, I can pretty much guarantee that you won't be able to pull your eyes away from the search for all the secret imagery in those covers.