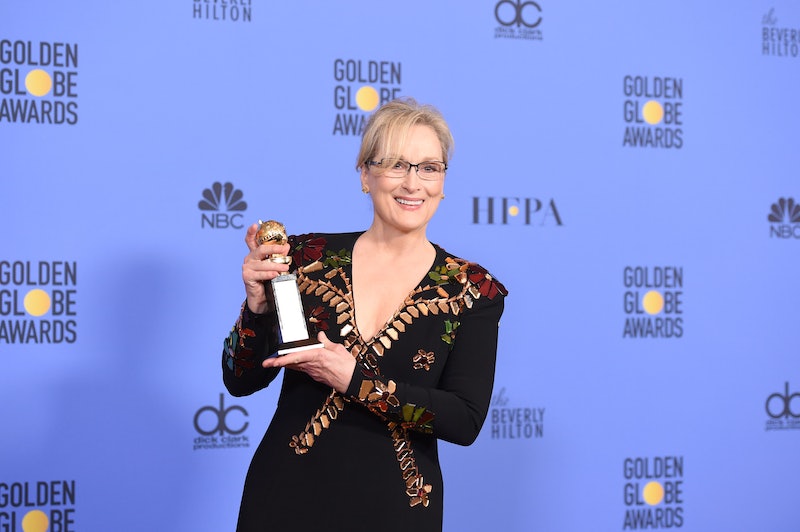 When Meryl Streep took to the stage at the Golden Globes and began to critique president-elect Donald Trump, she didn't use his name. Instead, she said, "There was one performance this year that stunned me — it sank its hooks in my heart. Not because it was good; there was nothing good about it. But it was effective and it did its job. It made its intended audience laugh, and show their teeth." Few would argue that Trump's rallies, speeches, and tweets aren't a performance, but perhaps Streep knows that to be true from prior experience. This old photo of Streep and Trump, for example, is a must-see.

The photo was taken on the set of Falling In Love, a 1984 film shot mostly in New York City. Whether this was a one-time interaction or if Trump and Streep have crossed paths other times is anyone's guess. But it's clear that whatever Streep once thought of Trump, his current actions have struck a chord. "It was that moment when the person asking to sit in the most respected seat in our country imitated a disabled reporter," Streep said at the Globes. "It kind of broke my heart when I saw it, and I still can’t get it out of my head, because it wasn’t in a movie. It was real life.”

After that came the real kicker in Streep's speech:

Disrespect invites disrespect, violence incites violence. And when the powerful use their position to bully others we all lose.

While what Streep used to think of Trump is a mystery, we have a better idea about what he thought of her — and it's quite far removed from what he tweeted Monday in response to her criticism. He called her "overrated" in a long rant on Twitter. It's hard to think that could be anyone's true opinion of the award-winning actor — and for Trump, it seems that, until recently at least, it wasn't.

As recently as Aug. 2015, right after he announced his bid for the Republican nomination, he felt quite differently. In a cover story for The Hollywood Reporter, which has to be the epitome of that West Coast liberal "dishonest" media he loves to hate, Trump said he was a big fan of Streep.

The media outlet asked him who his favorite actresses were, and one name he gave was hers: "Meryl Streep is excellent; she's a fine person, too," he told the reporter, before some creepy humblebragging: "The problem is I'll name three or four or five and then the hundred that I know will be insulted, and I don't mean to insult them."

If Streep's opinion on Trump has also diminished in recent years, I wouldn't be surprised (it's just difficult to know where it began). But there's one thing that we can be sure of. In addition to changing his mind, Trump was also wrong about another part of his tweet. "Doesn't know me," he wrote. It seems they've met, at least.

This old photo may be a surprise, but Trump going after one of his critics sure isn't.