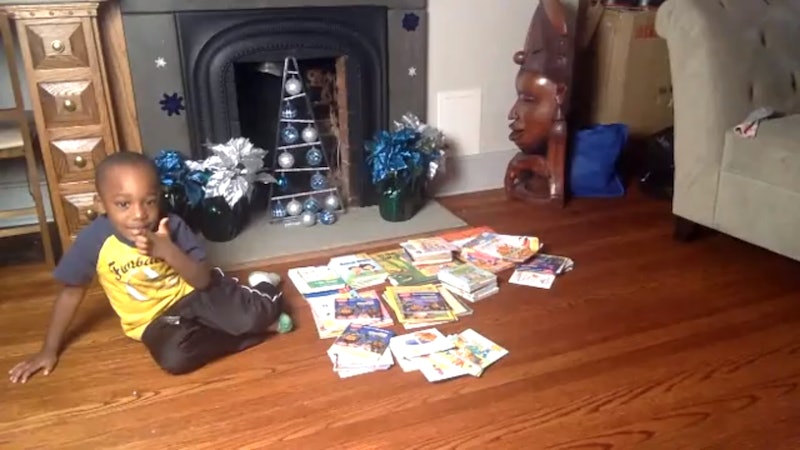 No matter how awesome your weekend was, you probably didn't accomplish as much as Caleb Green. The four-year-old boy read 100 books in one day, and his parents streamed the entire thing to Facebook Live from their Chicago home. The stream garnered a few thousand views from across the country, but those numbers matter much less than Caleb's impressive weekend reading load.

Encouraging young children to read is obviously important, as is supporting their dreams. When Caleb's father, Sylus, heard that his son wanted to read 100 books in one day, he was not sure it could be done. Sylus told the local ABC affiliate that he "had the gut reaction to talk [Caleb] down a little bit," but that he "learned to just dream bigger" from the experience. "I am going to set unrealistic goals for myself this coming year," he said, "and I'm going to be inspired by Caleb to not quit on him and just push through it."

The Greens supported their son's 100-book reading binge even when they did not have enough books at home to meet Caleb's lofty goal. After gathering up Caleb's favorite books about "Ninja Turtles and dogs," the Greens reached out to some friends of the family, who brought in more titles for the four-year-old to read.

Unfortunately, a lot of people took the sight of a young black boy reading books as an opportunity to comment on police brutality against black men. One commenter on ABC 7's Facebook page asked if Caleb would "respect the law and other people around him," which is a terrible thing to say on a whole lot of levels. Sylus clapped back with a screencap of the offensive comment, saying, "You know you are KILLING it as a 4 year old when adults wake up EARLY in the morning to hate on your greatness!!!" You tell 'em, Dad.

On a more positive note, Caleb could have a Guinness World Record in his future. In 2008, Deepak Sharma Bajagain set the record for "[t]he longest marathon reading aloud" by reading 17 books over a 113-hour period. Caleb clearly has a long way to go before he'll have the stamina to read for more than four days straight, but his Saturday reading marathon proves that he is well on his way to doing great things.