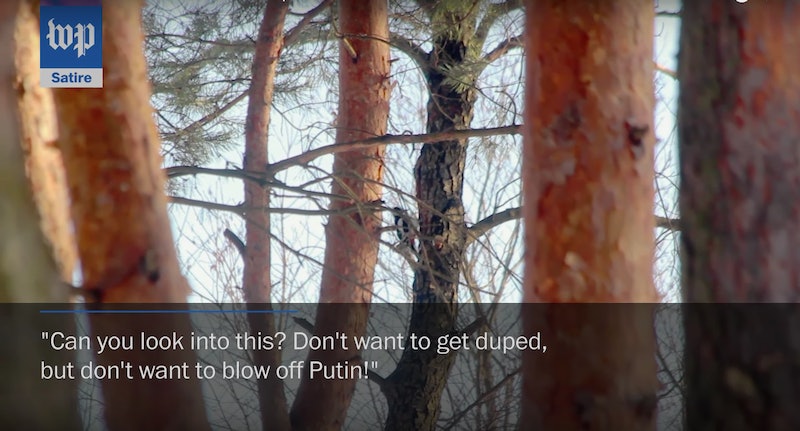 Thursday morning was an uproarious one for Capitol Hill, so to speak, after Attorney General William Barr released a redacted version of the special counsel's report on the Russia probe. Now, if you're into that kind of thing, there's an ASMR version of the Mueller report. Produced by The Washington Post's Department of Satire, this ASMR Mueller video is definitely unexpected.

In The Washington Post's ASMR Mueller video, a tie-clad anonymous man strokes the screen with a makeup brush — while reading statements straight from the report. In the beginning, the faceless ASMR man whispers a statement from the report: "The Russian government interfered in the 2016 presidential election in a sweeping and systemic fashion."

Then our mysterious speaker whisper-narrates certain quotes from Trump. According to Bloomberg, the president wasn't exactly thrilled to hear that Mueller would be the main person to guide this federal Trump-Russia investigation. The outlet noted that Trump apparently said, "Oh my God. This is terrible. This is the end of my Presidency. I'm f*cked." And those exact words are gently whispered in The Washington Post video, including a baby's giggle in place of the reported expletive.

Further into the video, you can listen to someone flip pages of the document over. In another part of the clip, a corporate-looking man can be seen squeaking his marker on a transparent board. Things get even more random; there's a scene of a monkey picking lice out of another's head, someone cracking open a can of soda, and a squirrel feverishly eating acorns.

Indeed, the Mueller report is a loaded one, eliciting reactions all over the country. According to CNN, Mueller and his group of investigators noted that they could not definitively conclude that Trump colluded with Russia in the 2016 presidential elections. But the report doesn't let the president off entirely, either.

"The evidence we obtained about the President's actions and intent presents difficult issues that prevent us from conclusively determining that no criminal conduct occurred," Mueller wrote. "Accordingly, while this report does not conclude that the President committed a crime, it also does not exonerate him."

In spite of the caveats given in the Mueller report, it does go on to say that Trump's 2016 presidential campaign "would benefit electorally from information stolen and released through Russian efforts."

For some people, it may be hard to find levity in the Mueller report considering the gravity of the matter; it is essentially a 448-page document about national security and foreign cyber threats, among other things. But the internet has managed to get quite a few laughs out of the probe nonetheless. It's not just the ASMR Mueller video; Twitter cranked out dozens of memes after seeing how redacted the report was.

It's possible that you're weirded out by the ASMR clip. For what it's worth, a typical ASMR video will feature someone softly whispering comments while carrying out a simple task. In many instances, ASMR YouTube creators tend to apply makeup on their hypothetical viewer, tap the microphone for them, share stories, or even eat copious amounts of food while the world watches. But with the Mueller ASMR clip, things got pretty surreal.