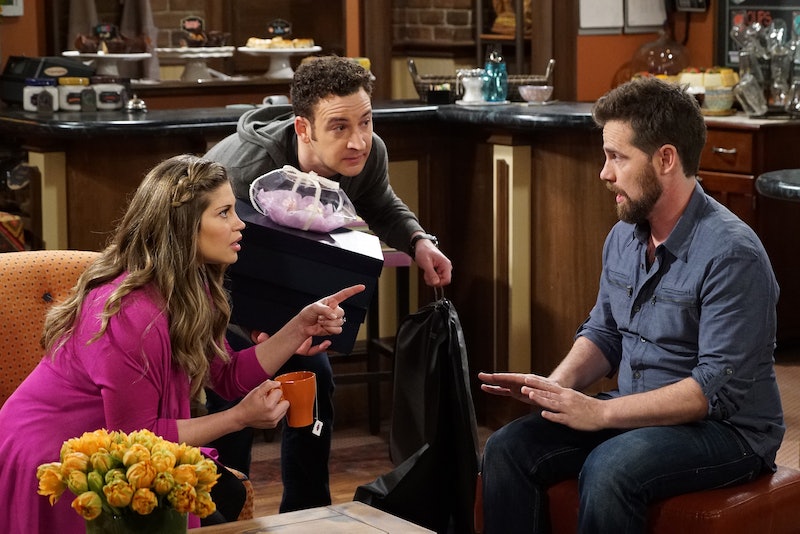 The award for most adorable cast goes to Boy Meets World for their latest reunion photo. Taken at the Dallas Fan Expo over the weekend, the photo features a pregnant Danielle Fishel modeling her baby bump alongside Rider Strong, Ben Savage, and Will Friedle... who are also modeling (imaginary) baby bumps. It's silly and wonderful and weirdly in character because as Topanga, Fishel's been clowning around with these guys since 1993.

She's going to have a new boy in her life soon enough. In January, Fishel announced on Instagram that she's expecting a baby boy with her husband Jensen Karp this July. She made the announcement by sharing a pair of baby sneakers with the caption, "I'm eating for two. I'm napping with wild abandon. Baby shoes. Baby clothes. (I'm shopping). I'm nesting. I'm reading books. I'm madly in love with my husband. I cry at commercials. I'm a walking cliché. I've got baby apps. I'm confident. I feel inadequate. I'm showing one day and the next I'm not. I'm nervous. I'm excited. He's due in July. We can't wait. #BabyKarp2019."

With just a couple months to go before her little one arrives, it looks like Fishel's Boy Meets World pals are keeping her smiling in the Dallas heat as they meet and greet fans. Both she and Strong shared the photo, with Strong captioning it, "Boy Meets Baby Bump(s)" on Twitter. Meanwhile, over on Instagram, Fishel wrote, "Sure this was funny — but only one of us is taking 25 bathroom breaks a day." Friedle may have won the caption contest though with, "What to expect when you’re expecting...or, at least...What to expect when you’re expecting and a member of our family! #sympathypains #thispregnancystuffisprettyeasy #loveyoudanielle #fanexpodallas."

Seeing the Boy Meets World cast celebrating yet another life milestone together is enough to warm any '90s kid's heart. But it's also a reminder of just how close this cast remains to this day. After all, this isn't even their first reunion of 2019. Back in March they reunited at the Emerald City Comic Con with William Daniels, who played their beloved teacher Mr. Feeny. At the time, Fishel shared the photo of her co-stars alongside a clever take on Mr. Feeny's parting words to his favorite students. In the series finale, he tells them "Dream. Try. Do good." Fishel wrote, "Dream. Try. Do Cons."

Of course, their most memorable reunion came in the form of Disney Channel's sequel series, Girl Meets World. Over the course of three seasons, every member of the original cast appeared at least once, as Fishel's Topanga and Savage's Cory raised their two children, Riley and Auggie, in New York City. It seems fitting that Fishel's now preparing to tackle motherhood for real surrounded by a support system that seems to include the co-stars she's known since she was just a kid herself.

The Boy Meets World cast may be all grown up and leading busy lives, but photos like this one are a reminder that they always make time for each other. It's also a promise that Fishel's baby boy is going to have a whole lot of honorary uncles just waiting to teach him how to get his silly pose on for photos when he gets older.