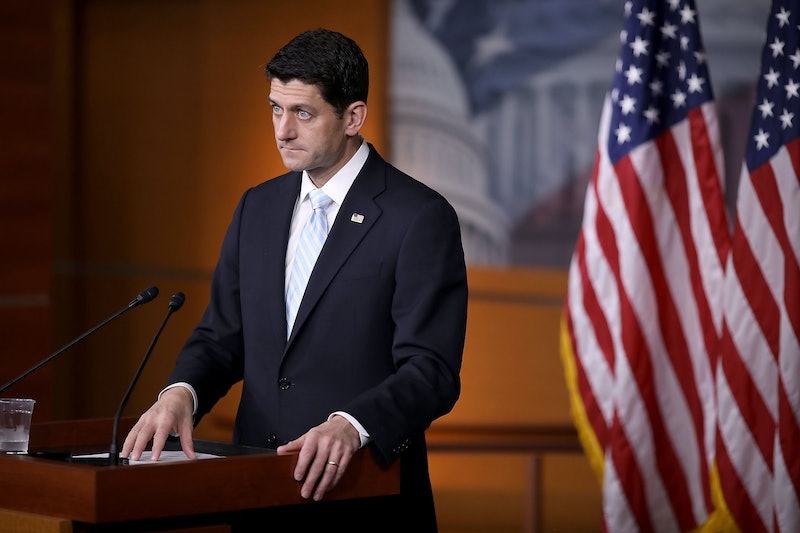 It's all well and good to argue about policy in the hallowed halls of the United States Capitol building. As Paul Ryan experienced at his town hall event. It's another thing entirely to oppose a policy in the face of someone who literally owes his life to it. A cancer patient told Ryan what the Affordable Care Act has done for him, and it really put into sharp focus exactly what is at stake if this is repealed.

The man was Jeff Jeans, a small business owner and "lifelong Republican." He received a cancer diagnosis and was given six weeks to live, but without insurance he could not have received treatment. The cancer was easily treatable, so because the ACA allowed him to buy insurance with a pre-existing condition, his life was saved. He even interrupted Speaker Ryan to thank President Obama in particular for spearheading the legislation that allowed him to live on. The question he asked got right to the heart of the matter: Why are Republicans repealing Obamacare without a replacement?

Speaker Ryan handled the question as you would expect, telling Jeans that they "want to replace it with something better" and then explaining what he means by "death spiral."

For anyone looking for an answer as to what the replacement would be, Jeans likely included, Speaker Ryan's answer was wholly unsatisfying.

Jeans thanked Obama from the bottom of his heart, and Ryan responded with lies about how Obamacare is functioning — or, as he was claiming, not functioning. However, the man standing in front of him was a living, breathing human who would no longer be living or breathing if the ACA had not been in place when he needed it. Ryan responded:

The problem with Obamacare – the actuary is called a ‘death spiral.’ It’s a really kind of ugly, gruesome term, but a ‘death spiral’ is a mathematical term. They say when the insurance gets so expensive, healthy people won’t buy it because they – it’s just a trade-off. The penalty to not buy is a lot cheaper than buying the insurance, so healthy people won’t buy it; therefore, they won’t go and participate in the insurance pool to cover the losses that sicker people, who have to have insurance, buy it. That’s what’s happening to Obamacare now.

Ryan's response was as warm as it could be; he does not come across as a chilling partisan when he doesn't want to. But that doesn't erase the fact that if he and his GOP colleagues in Congress had had their way, the ACA would not have been in place to save that man's life.

Republicans' rash efforts to get rid of Obama's legacy might be exactly that if they touched on an aspect of government policy that didn't have such deep effects on the lives of their constituents. With the ACA, though, they're talking about people's actual lives. Their abilities to stay healthy, to cure their children better when they've gotten sick, to give their parents a comfortable last few months of life. These aren't trivial issues.

It's easy to look at numbers and figures – the amount that the ACA costs taxpayers, or the millions of people now insured who weren't before — but it's a different thing to come face to face with one single man who has the policy, and the president, to thank for his life. The encounter seemed to have no effect on Speaker Ryan, but maybe it will touch the hearts of the thousands of people whose votes he will need in the next election.