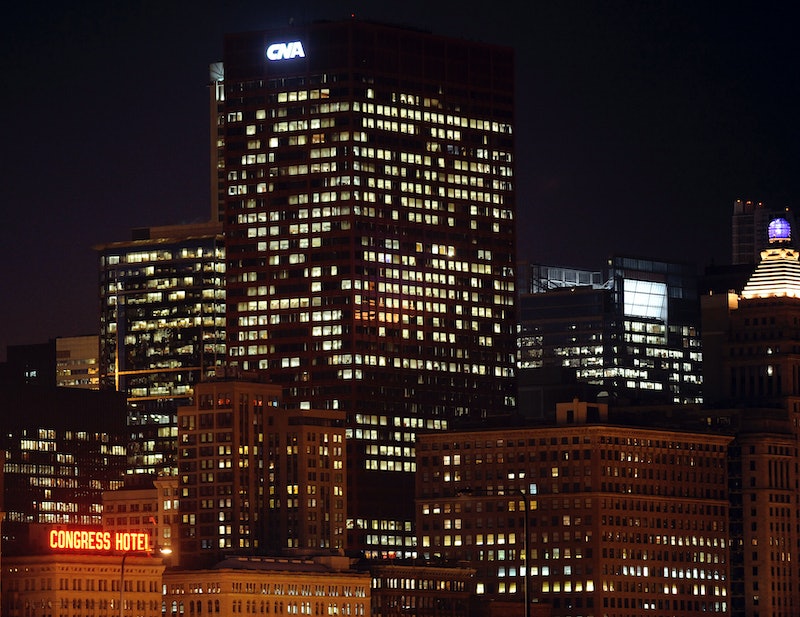 On Tuesday night, President Obama delivered his final speech as POTUS, and it was a big hit with his hometown audience. Obama chose to give the traditional presidential farewell address from McCormick Place, a Chicago landmark where he celebrated his 2012 reelection win. While many former presidents have delivered their remarks from the remove of the White House, Obama stood in front of a live crowd of roughly 2,000 attendees and formally said goodbye to the nation he's led for the past eight years. In response, one Chicago building lit, the CNA Building, spelled "THANK OBAMA" in its windows in a show of gratitude for the outgoing president.

Someone at the CNA Building in the Loop had the bright (pun!) idea of using its interior lighting to spell out "THANK OBAMA" on the skyscraper's top floors. And if the audience response to Obama's Tuesday speech is indicative of Chicago's warmth toward the president, it's no surprise that open displays of affection spanned out and beyond McCormick Place. Often during Obama's remarks, uproarious applause and shouts of agreement erupted from the enthusiastic crowd. Across the city, their emotions were echoed in a simple statement of gratitude for what Obama has done as president, and what he's meant to the country.

While many past presidents have seen modest boosts in public approval shortly before they leave office, President Obama's rating has veritably soared in the past few months. According to Gallup, the average approval rating for a president in his 32nd quarter is 52 percent. The most recent poll puts Obama at 55 percent, though in the week following President-elect Trump's win, that number shot up to 57 percent. These historically high numbers are especially impressive, considering that in the entire year of 2015, Obama never once reached even 50 percent approval.

It seems safe to assume that many Americans are more willing to give Obama the benefit of the doubt, now that his term in office is nearly complete. One might also speculate that the person who will follow him to become the 45th POTUS has perhaps highlighted certain qualities in Obama that were previously taken for granted.

For instance, Americans aren't accustomed to a president who regularly tweets out his unfiltered opinions on everything from "totally embarrassed" political opponents to "swamped" television ratings of a reality show host who just can't compete with "the ratings machine, DJT."

So it makes sense that so many in Obama's home city would be especially forthcoming with their sadness to see him go. For millions of Americans, the Chicago "THANK OBAMA" message is one taken deeply to heart.