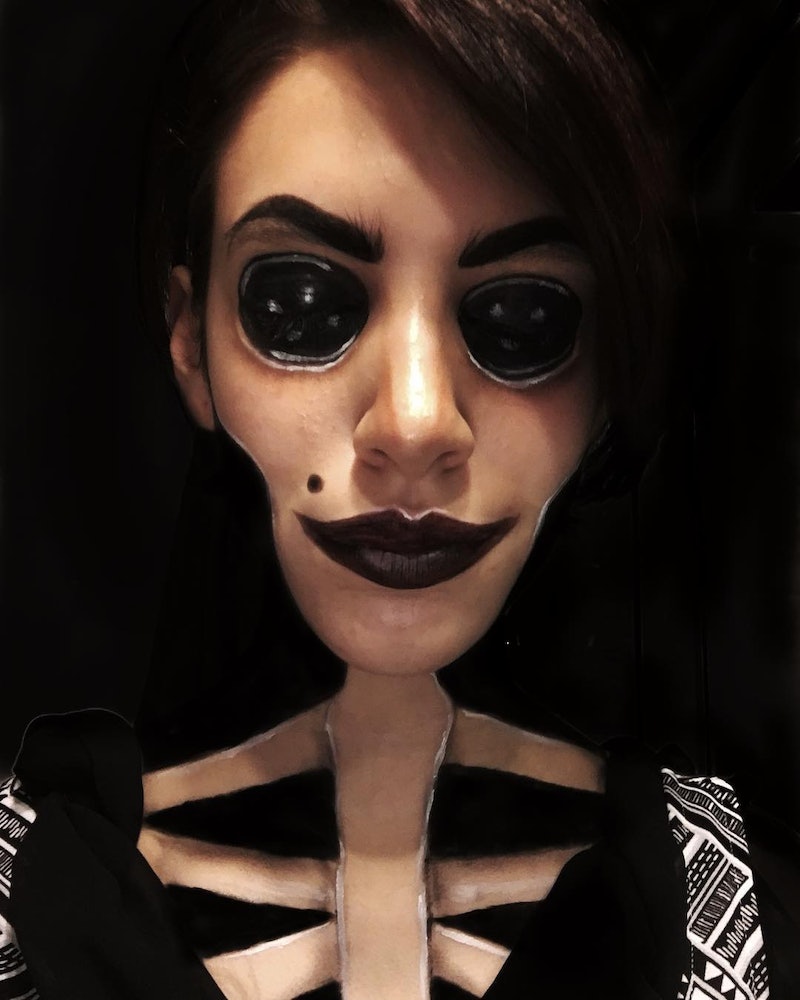 When it comes to terrifying Halloween costumes, there's the classics like zombies and witches that never go out of style, but then, there's the new, character driven costumes. While everyone may be trying to rock a Pennywise look, this makeup artist's Coraline-Inspired Halloween look is the perfect balance of creepy and impressive. Cat Jordan's look is seriously terrifying, and if on the street in her Other Mother makeup, she may be the inspiration for a nightmare or two. However, her talent is what aspiring makeup artists' dreams are made of.

Jordan is a 16-year-old makeup artist who, according to Refinery29, was inspired by fellow artist Lex from Madeyewlook. While both looks are impressive, they're also distinct, perfectly illustrating the way makeup can be a personal endeavor. Why the Other Mother, though? Both Lex and Jordan appear to be fans of the film — which is based on Neil Gaiman's novel of the same name.

Who is the Other Mother, though, and why — other than those button eyes and skeletal chest — is she so scary? According to her interview with Refinery29, Jordan explains, "I think Other Mother is so appealing because it’s not only her looks that scare, but how the way she is portrayed as a motherly figure to Coraline is completely destroyed when she is revealed to be the antagonist. I think that’s why so many people are scared of her, because they feel like it's betraying, almost...[Myself] included."

As for the rest of the Halloween season, if you love Jordan's incredible Other Mother, get excited because she's got more to come. Jordan told Bustle, "I’m currently working on a few other Halloween looks that will probably be going up on my Instagram in a couple of days. I’ve always been drown to creepy and gory stuff, I love those, specially if they are cartoons. I have planned a few Tim Burton and American Horror Story inspired ones so it is going to be a fun couple of weeks. I really like this characters because one of my favourite things is working with shadows and light to create volume and realism, specially if I’m trying to maintain a more cartoony concept. I feel like I can really push myself to the limit and work to reach my full potential."

Could newfound fans of Jordan's work see glam looks alongside her more terrifying talents? She tells Bustle that while she does love a good glam, it's the more sinister looks that call to her. She says, "As a makeup artist, I love glam makeup, but more dark and disturbing concepts are the ones I’m more drawn to. I want people to feel something when they see my art, whatever that is, I’m always looking to get that effect on people."

Jordan's tutorials are not the only ones that have been lurking on the internet lately. Halloween brings out serious talent on social media. YouTube gurus are all over Halloween looks, and they're all incredible. If the Other Mother isn't quite up your alley, you've got plenty of options.

If the Other Mother isn't for you, why not be Coraline herself? Jordan's inspiration, Lex from Madeyewlook also did a gorgeous Coraline tutorial.

If Pennywise isn't your cup of tea, why not try Nicol Concilio's glam clown makeup?

If, however, you're all about embracing girly costumes, Laura Leth's incredibly pink and purple unicorn is ideal.

Clearly, there's no shortage of ideas or tutorials to choose from for your Halloween looks. Whether it's glam, girl, or gory, you can snag the perfect makeup look for your festivities. If, however, you love Jordan's Other Mother look, head over to Refinery29 to find out more about her inspirations.

More like this
12 Bellissima Beauty Moments From Milan Fashion Week S/S 2023
By Olivia Rose Ferreiro
Danessa Myricks Does It All
By Parizaad Khan Sethi
Does Valentino’s Twin Liner Live Up To The TikTok Hype?
By Olivia Rose Ferreiro
This Week’s New Makeup Releases & More Beauty Headlines
By Audrey Noble and Erin Stovall
Get Even More From Bustle — Sign Up For The Newsletter