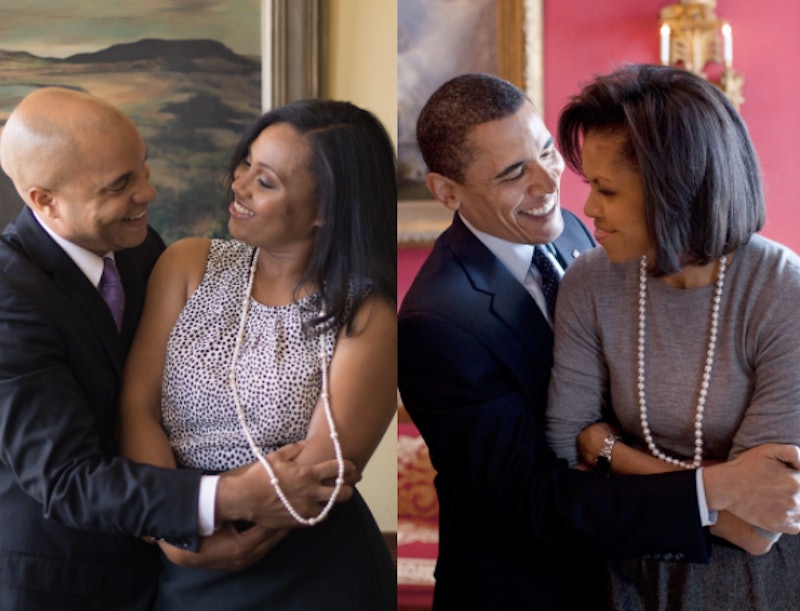 Think of your favorite power couple. Now who comes to mind? Is it Jay-Z and Beyoncé, or even Angelina Jolie and Brad Pitt in their heyday? Or is it Michelle and Barack Obama? If you idolized this First family, you aren't the only one. The Obamas were everything America loved about a First family. Sasha and Malia were low key our cousin-sister-friends that you couldn't get enough of, their dog Bow was just so darn cute and photogenic, and the love between Barack and Michelle are eternal love #goals. So it's only right that this couple recreated Michelle and Barack Obama pictures for their engagement shoot that made American swoon all over again.

Genius, right? Thanks to Cleveland photographer Natasha Herbert, the series of photos come stunningly close to the First couple that stole our hearts. According to Essence, the couple, Adam and Cassi, suggested recreating a few iconic moments, but Herbert convinced the soon to be bride and groom to do a series of the Obamas most iconic photos together. And thus, engagement photo #goals were born.

When Herbert shared some of the outtakes on her Instagram, people couldn't get enough of them. Because who can resist the Obama charm and pre-wedding bliss all in the same photo?

Cassi and Adam's wedding planner Covesa Gragg of Covesa Kelly Events shared with Brides that the intention wasn't to go viral. "They genuinely admire the Obamas and felt their love was an example of what they want out of their marriage. We just wanted to capture that love," said Graggs.

The series of recreations are a creative spin on major Obama nostalgia. Others refer to this moment on Twitter as #BringBackObama, a feeling many Obama family fans know too well.

The photos featured iconic Obama couple moments such as their Essence cover in October 2016, their cute hug just before the National Newspaper Association Reception in 2009, and the gorgeous black and white photo with Michelle's arm resting on Barack.

The photos have not only made its way on to a few women's platforms like Refinery29 and Essence, but on local news stations like WKYC Channel 3 in Cleveland, Ohio. Scrolling through the comments of the original photo Herbert posted, many commentators praised how perfectly each photo was framed.

It's OK if you're catching feelings. At this point, who isn't?

So six months in and an Instagram post proves the love is still real for the Obamas. Congratulations to Cassi and Adam on their engagement and their wedding in December. If the engagement photos are this gorgeous, perhaps a wedding reception reminiscent of the Obama's first dance via Inaugural Ball in 2008 would be appropriate.

More like this
Why TikTok Is Obsessed With Caesar Salads Right Now
By Alexis Morillo
Behind The Hilarity Of The "POV: You Walk Into My Room" TikTok Trend
By Lexi Inks
Why TikTok Is Flooded With Controversial Videos About "Pick Me Girls"
By Courtney Young
This TikTok Song About An Unrequited Romance Has FYPs In Shambles
By Emma Carey
Get Even More From Bustle — Sign Up For The Newsletter