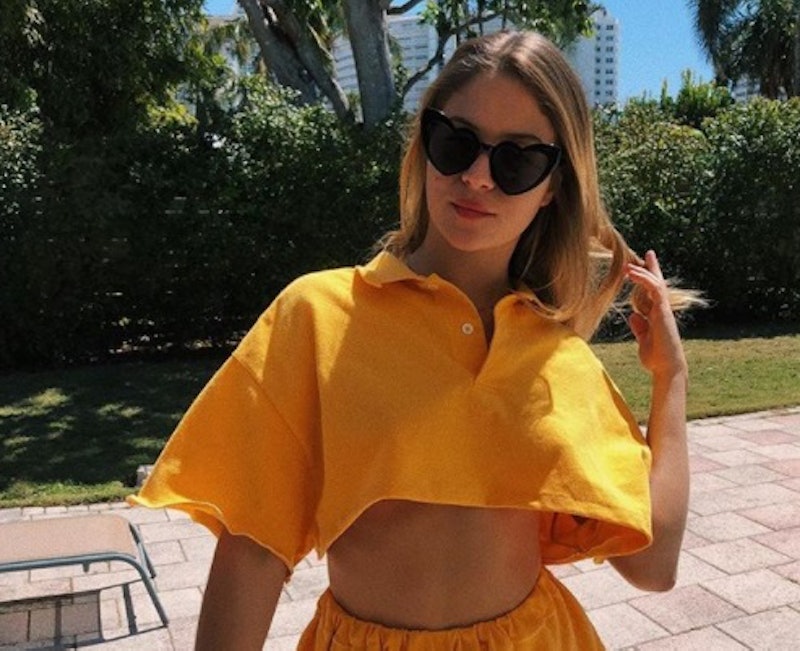 Millennials are nothing but resourceful, especially considering how the generation came of age during the greatest economic crisis since the Great Depression and are leaving school with record amounts of student debt. Not having as much disposable income handy as past generations, its no wonder that thrifting, DIYing, and repurposing have become major parts of our aesthetic. Which is why it came as no surprise when designer Kia Davis began creating matching sets from dad polos. It's what you would expect.

A Miami designer, Davis' store Kiki's Kinis sells handmade minimalist bikinis, and she originally created the polo set to go with her swimsuits. “I actually started repurposing and upcycling dresses and maxi skirts by turning them into sets to match with my handmade swimwear," she shares with Teen Vogue. Seeing how throwback '90s looks have been on the rise lately — featuring everything from mom jeans to scrunchies — it's not a shocker that the polos have caught the interest of her client base.

While it might be a baggy dad shirt when hanging in your dad's closet, it turns into a Clueless inspired outfit when it's cut into a crop top and flirty mini. All you need are some thigh highs and a pink pom pom pen and you're channeling either Cher Horowitz or Dionne Davenport. That's actually the way Davis likes to dress up her look, telling Teen Vogue, "I usually match the set with tennis shoes, mid-calf crew socks, and a high ponytail." It's the '90s prepster look at its finest.

The polo set seemed like a natural progression for Davis' brand, where a quick spin through Kiki's Kinis Instagram account shows a series of DIY crop tops and cover-ups before the polos hit. From a boxy vintage button up shortened to show off strappy bathing suit bottoms, to a Fresh Prince of Bel Air like top turned into an underboob shirt, to a vintage Tommy Hilfiger tee cropped way high, reaching for the polo was just the next step in her sartorial journey.

As for the polos themselves, Davis debuted them on her Instagram only five days ago, and they have gotten major buzz since. The yellow polo set was shared first, and the comments were nothing but supportive and adoring.

"Oh ma lawrd.. i need a whole collection of these crop tops for hardcore dancin' in da club," one follower wrote. "Such a cool way to give a second life to a vintage teeshirt, love the idea!" another shared. "This look x her hair flip= goals," another follower posted. "Would love to collab for Coachella," one Instagram model shared, about to make this the festival look of the season. (And she wasn't the only influencer asking to collaborate.)

Her sets aren't only limited to polos, either. She also took a baggy sweatshirt and created a cute mini skirt sweatsuit out of the oversized crew neck. Wanting to try something even sportier, she also repurposed a souvenir "Florida" hoodie into an adorable two piece, thigh-skimming look, as well as a baggy striped t-shirt into a light weight crop top outfit.

The only downside is that since these are all handmade and Davis doesn't have a warehouse of them, they tend to sell out quickly. Half of the comments underneath the Instagram posts are from people who just missed the re-stocks and are hoping they catch the next, but Davis has a solution around that frustration. On Twitter she announced you could send her a shirt or sweater of your own to her address, and she'll turn it into a set for you.

While the sets on her store range between $45-$50, sending her your own piece to makeover would cost $20, not including shipping.

If you want a flirty, Clueless inspired look this summer, definitely hop onto this dad polo bandwagon. The trend is about to blow up in a big way!